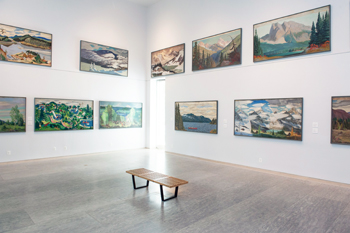 The majority of Canada’s 3.8 million square miles is dominated by stunning mountains, tundra, forests and untamed wilderness. Perhaps the best way to soak in this expansive scenery, which stretches from the Atlantic to the Pacific Ocean, is by train.

The Embassy of Canada is hosting a unique art exhibit that is all about transportation, tourism, nature and nostalgia. “Murals from a Great Canadian Train” is a collection of works that were featured on the Canadian Pacific Railway, or CPR, during its passenger heyday.

“Murals from a Great Canadian Train” at the Canadian Embassy is a collection of works that were featured on the Canadian Pacific Railway during its passenger heyday.

CPR, the nation’s first transcontinental railway, was for decades the only practical means of long-distance travel for many Canadians. In 1953, CPR purchased 173 brand-new stainless-steel rail cars from the Budd Company of Philadelphia. With the glass ceiling design in its Vista Dome cars, “The Canadian” became the quintessential cross-country train experience.

To highlight the natural wonders along the route and to promote tourism, CPR chose Canada’s national and provincial parks as the inspiration behind the interior design of “The Canadian” rail cars. In 1954, the Royal Canadian Academy was asked to coordinate the selection of leading Canadian artists to paint murals for each of the 18 Vista Dome cars.

Today, CPR primarily serves as a freight railway, and the murals are housed in the Canada Science and Technology Museum’s artifact collection, but they have traveled down to D.C. for a rare appearance.

The idea behind the Canadian Embassy exhibit was to commemorate the centennial of the U.S. National Park Service. Curator Sharon Babaian said that officials at the embassy had heard about the murals and asked about showing them as an entire group, a gesture that has seldom been done before.

The murals depict parks from every Canadian province, and three are by members of Canada’s famed Group of Seven, a group of landscape painters in the 1920s and ’30s. Snow-tipped mountains, serene lakes and lush blankets of pine trees hint at the breathtaking vistas that train travelers encountered. They also evoke the vastness and variety of Canada’s rugged landscape.

“I think visitors will relate to the murals on a number of different levels,” Babaian said. “Some will be drawn to individual paintings perhaps because of the specific subject matter, while others will seek out a particular style or color palette.”

Babaian said that visitors will be amazed by the diversity of the environments the murals depict and how each artist captured the individual beauty of each place. “I think they will also be impressed at the project itself, at the idea of commissioning great artists to ‘decorate’ railway cars,” Babaian added.

Also, she said it’s important to remember that when air travel became popular in the ’40s and ’50s, railway companies looked for interesting ways to draw in travelers who were turning to planes over trains.

“The park cars and the paintings were part of their attempt to exploit the lucrative tourist market by offering something airlines couldn’t: an elegant, spacious, modern and comfortable environment for travel and immediate access to Canada’s most stunning and iconic landscapes,” Babaian said.

Even in a bustling city such as D.C., landscape paintings such as these tend to have a universal appeal, which Babaian said is “rooted in our desire for natural beauty and tranquility and for images that invite contemplation and reflection.”

Trains also link us to the early days of our own country’s history, when railway connected the East and West Coasts and paved the way for America’s expansion. While today, both Americans and Canadians opt for the convenience of planes and cars, trains continue to hold a special place in both nations.

“This is a stunning exhibit that showcases Canada’s history, art and spectacular landscapes,” said Christine Constantin, spokesperson for the Embassy of Canada. “Rail allows people to get a glimpse of the breathtaking scenery and immense natural beauty that is Canada and we hope that in 2017, when Canada celebrates its 150th birthday, people will take advantage of our rail network and explore the nation from coast to coast.”

Murals from a Great Canadian Train