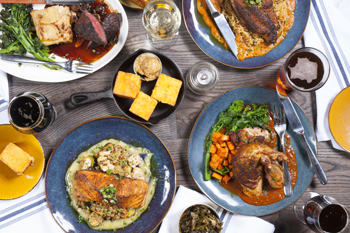 Due South, located near Yards Park, specializes in Southern regional cuisine, from Louisiana’s red beans and rice to South Carolina’s shrimp and grits.

When Washingtonians mention the “waterfront,” they typically mean the iconic stretch of real estate along the Potomac River in Georgetown, with its riverside promenade and mostly middling restaurants.

That’s about to change. A massive transformation of D.C.’s long-moribund Southwest Waterfront is well underway, and it won’t be long before locals are asking “which one?” when friends suggest a waterfront meet-up for dinner or happy hour.

The new $2 billion, mile-long redevelopment project along Maine Avenue known as the Wharf, near the famous fish market in Southwest D.C., promises a number of exciting eateries, including sure-to-be buzzy hotspots from local celebrity chefs Mike Isabella, Jamie Leeds and Fabio and Maria Trabocchi. The mixed-use restoration project, stretching across 24 acres of land and 50 acres of water, marked a major milestone this summer with the announcement of its first office tenant, the American Psychiatric Association. The plan is to eventually open an array of restaurants, retail, upscale condos and apartments, nightlife attractions, including a “jazz alley,” and outdoor space in the form of a pier, sea-wall promenade, market square and “yacht club piazza.” But phase one of the exciting project won’t be finished until next year.

In the meantime, it’s worth exploring yet another of D.C.’s newish waterside attractions that’s already bloomed near Nationals Park in the Capitol Riverfront neighborhood. The southeast waterfront along the Anacostia River — anchored by the still gleaming-new baseball stadium and the gorgeously designed Yards Park — boasts some better-than-expected dining at price points that won’t make you wince.

Most of the culinary action near Yards Park is along Half and Water Streets, SW. On a comfortable summer evening in July, we biked over to enjoy some free live music courtesy of the annual D.C. Jazz Festival. After listening to Cissa Paz’s sultry Brazilian torch songs and watching kids splash around in a sleek public water garden, we’d worked up an appetite.

Glancing around, we spied Due South. The menu touted a grab bag of Southern regional cuisine, from Louisiana’s red beans and rice to South Carolina’s shrimp and grits to Texas barbecue. But while the upscale comfort food sounded appealing, the hour-plus wait did not, so we moved on, vowing to return on another night. Moments later we found no wait — and some very tasty Baja-inspired Mexican food — next door to Due South at Agua 301. At first glance, we weren’t exceedingly optimistic about either spot. Their thematic approaches to food and large-scale spaces didn’t suggest anything especially unique. But in successive visits, we found that Agua 301 and Due South both do what they do well.

We asked our waiter at Agua 301 his assessment of the menu and he informed us that he had just moved to D.C. from southern California, where Baja-style tacos rule. He gave the food his hearty stamp of approval. Suddenly, I felt optimistic.

Soon after Agua 301 opened, Washington Post food critic Tom Sietsema chastised the kitchen for using too much salt. The cooks seem to have gotten the memo. The black bean dip consisting of beans, onions, jalapeno and Oaxaca cheese — served up in a piping hot, melty mash — was excellent, and a little bit (not a lot) salty, as it should be. The beans retained some of their structure while the mild, soft, almost buttery cheese gave the dish a pleasing texture and contrast. The onions and jalapeno provided the requisite kick, and a pile of small, hot flour tortillas made for an adept delivery mechanism. Good stuff. 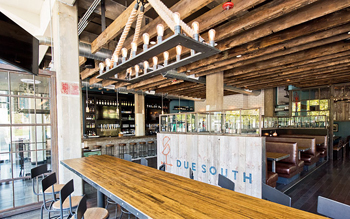 Guacamole is another star of the menu here. The traditional version — with avocado, lime, serrano peppers and tomatoes — is fresh, creamy and slightly tart with citrus. The eatery also serves guacamole with jumbo lump crab and fresh corn.

Since our server praised the tacos — and who doesn’t like tacos — we tried a couple of versions. The carnitas tacos, filled with shredded pork, orange, pickled red onion and habanero salsa, were generous and succulent, with the orange serving as a cool contrast to the habanero heat. The fish tacos were piping hot with a slightly crispy batter and tender texture. A smoky chipotle crema draped the fish, with tart shredded cabbage and pico de gallo piled on top. The tacos — a filling and fair bargain at $7 a pair — didn’t last long at our table.

Before we move on to Due South, it’s worth mentioning Agua Fria’s margaritas. None of that cloying, calorie-laden, neon green margarita mix is used here. Agua 301’s classic version instead uses fresh lime juice, agave and Sauza Blue Silver tequila. The menu boasts multiple margarita options but we kept it simple and straightforward with this classic.

In fact, on a nice day, a couple of those margaritas, a basket of their tasty chips and salsa and Agua 301’s waterside patio would be more than enough reason to while away an hour or so. We’ll definitely be back.

A week later, The Diplomat hit Due South — this time armed with an Open Table reservation. We arrived at 7 p.m. and found more than a few Washington Nationals fans lingering at the bar celebrating the team’s win earlier in the afternoon. A friendly hostess immediately directed us to a table in a section of the restaurant partially enclosed by glass just off the main dining room. At first, I thought the location would impede our ability to connect with the energy of the main room, but we quickly found the quiet more appealing to the clamorous bustle outside. This is a good-looking restaurant with an elegant, rustic yet modern Southern vibe. Polished wood tables and distressed wooden floors anchor a room accentuated with bronzed metal and glass and brown leather banquettes.

Scanning the menu, we thought the pimento cheese spread seemed like a novel appetizer that recalled comfort food of youth, so we tried it. Unfortunately, we weren’t particularly impressed with Due South’s version. The kitchen obviously uses quality ingredients but the contrasts were all wrong. While most pimento cheese is creamy in texture, this was more chunky and granular, albeit with a sharper (and to me, more appealing) flavor than the more typically mild versions of the spread. The toasted bread added more hard textures to the dish and the raw vegetables seemed flat and flavorless. This was not a terrible start — again, the flavor of the cheese itself was appealing — but it was not a great beginning, either.

We also ordered the blackened local catfish with grilled corn and okra succotash, baby spinach and smoked heirloom tomato vinaigrette. The blackened fish fillets were plump and flaky with a satisfying light flavor, while the vegetables tasted fresh and lively. The intensely smoky tomato vinaigrette tied it all together. But still, something was missing and that something was heat. A few dashes of classic Crystal hot sauce from Louisiana solved the dilemma. This was also a generously proportioned dish, especially at $19.

While the catfish was a very good dish, the shrimp and grits — a staple of Charleston, South Carolina’s vibrant food scene — is the star of the show at Due South. The dish features Anson Mills grits. Why does this matter? Because these grits are regularly milled from fresh South Carolina corn. It makes a difference. This particular variety of grits is granular instead of mushy. The pile clings together and makes a fine bed for a generous array of a half-dozen jumbo shrimp, while the lightly salted and succulent Tasso ham gravy, featuring button-sized flecks of ham, adds another dimension of flavor, complexity and heft. The shrimp and grits were delicious and filling, and a deserved staple of the Due South menu.

One more note about the Yards Park waterfront area. Another eating and drinking establishment — Bluejacket — sits across Water Street from Due South. Bluejacket has something of an industrial feel and brews 25 beers on site, some of which are quite good. We’ve never been overly impressed with our limited experience with the food but haven’t spent enough time with the menu to make a definitive judgment. Chances are good that we’ll be back to all three establishments as the Yards Park becomes an increasingly appealing waterfront option for dining and relaxing.