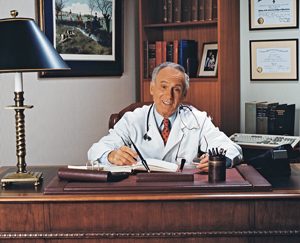 Ten years ago this summer, I was in the middle of chemotherapy for breast cancer. When I first met the medical oncologist who would be managing my care while I endured 16 weeks of toxic chemicals coursing through my veins, she was more than an hour late to our first appointment.

I was annoyed. At first.

Then she arrived, apologized profusely for her lateness, and sat down with me in her office and shut the door. We talked for over an hour. She answered every question I had. She never once looked at her watch, or at the door, or made me feel like she had anywhere else she needed to be except right there with me, being my doctor.

I soon learned that this was the way she was. If you had an appointment, she might be a little late or very late, but none of her patients minded — because we knew why. She was taking as much time with the person right before us as she would take with us. We all got as much of her time as we needed and 100 percent of her attention every minute she was in the room with us.

Needless to say, that’s not how most encounters with doctors go these days. It’s been a full 30 years since the Annals of Internal Medicine published a well-known study that found the average amount of time a patient was allowed to speak before the doctor interrupted was a paltry 18 seconds. Over the intervening years, reams of medical curricula, pages and pages of scholarly research, and hours upon hours of discussion among medical leaders have been devoted to the deficiencies in many doctors’ bedside manners.

And yet things don’t seem to be improving — if anything, they may be getting worse. In a 2001 study of medical residents in primary care published by the journal Family Medicine, patients were allowed to speak for only 12 seconds, on average, before being interrupted.

These more recent studies are particularly dispiriting because they involve medical residents — doctors fresh out of training, with that “new doctor smell” still clinging to their white lab coats. Medical schools have been trumpeting their efforts to teach better bedside manner for at least a decade, many much longer. But has any of it been sinking in?

Perhaps some doctors, whether newly minted or long in practice, remain unconvinced of the real clinical importance of good patient communication. Most doctors enter medicine because they want to help people, and all but the brusquest probably wish they had more time to spend with their patients than seems feasible in today’s frenzied health care system. But if good bedside manner falls through the cracks sometimes, does it really harm the patient?

Apparently so — or at least, the reverse is true: Good patient communication actually does as much to improve outcomes for some chronic conditions as many well-established medical treatments, according to a recent review of studies related to bedside manner and the doctor-patient relationship.

The study, published in the online journal PLOS ONE in April, analyzed outcomes from 13 randomized controlled trials in which physicians received various types of training or other programming designed to improve their relationships with patients.

The authors, led by John Kelley, a psychologist at Massachusetts General Hospital, found that relationship-focused training had a “small but statistically significant” effect on measurable health outcomes in patients with obesity, diabetes, asthma or osteoarthritis. In fact, improved doctor-patient communication was more effective at preventing heart attack than low-dose aspirin or cholesterol-lowering statins.

So doctors like mine — the ones who actually sit down and listen to their patients instead of lingering at the door — can improve patients’ health in measurable ways, not just make the experience of going to the doctor less unpleasant.

Going forward, we’ll have to see if some of the mandates of the Affordable Care Act can help make those doctors more the rule than the exception. At the moment, some private insurance carriers, particularly HMOs, dictate the length of time each visit should take (some routine consultations, for example, amount to 15 minutes).

Starting this year, part of each hospital’s payments from the Centers for Medicare and Medicaid Services is linked to a set of quality measures that include something called the “Patient Experience of Care Domain,” a score that’s based on a national patient survey that asks questions about things like communication with doctors and nurses and the responsiveness of hospital staff.

Many hospitals are now adding a new high-level staff role called the “chief experience officer” (the Cleveland Clinic lays claim to being the first). That might sound like a Club Med kind of job, and in fact most of the people filling these posts come from the hospitality industry rather than from health care (although the Cleveland Clinic’s CXO is a colorectal surgeon).

It’s encouraging to see all this attention — both carrots and sticks — focused on improving doctor-patient communication and the patient experience in general. What it will translate to in the real world remains to be seen. But despite the false starts we’ve had so far, it’s an effort worth making. While the medical care I received 10 years ago is what saved my life, the “compassionate connectedness” of my oncologist played an enormous role in sustaining me at one of the hardest times in my life. That’s medicine at its best.