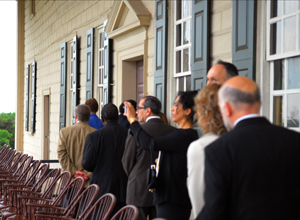 At a Senate confirmation hearing in March to become President Obama’s new chief of protocol, Peter A. Selfridge spoke proudly of his family’s German, Scottish and Irish heritage, of his Midwestern upbringing — born in Illinois, raised in Minnesota, educated in Iowa — and of his wife Parita Shah, whose parents come from the Indian state of Gujarat.

Foreign diplomats tour George Washington’s estate at Mount Vernon in Virginia during a May 21 reception to welcome Peter Selfridge, the new U.S. chief of protocol at the State Department.

“My father taught me from an early age that good etiquette and decorum are not only useful tools for navigating society, but a reflection of the person wielding them,” Selfridge said in his written statement. “Treating others as you would be treated is a virtue for everyday life, and it is one of the guiding principles of protocol.”

On May 5, the Senate confirmed Selfridge for the job. On May 13, the former White House chief of advance was sworn in, and eight days later, he made his first public appearance as Ambassador Selfridge, during a reception at Mount Vernon attended by Virginia Gov. Terry McAuliffe, an array of local business executives, and diplomats from 60 countries ranging from Benin to Papua New Guinea to El Salvador.

“I look forward to working with all of you in the future,” Selfridge told the 200 or so guests in attendance at George Washington’s estate in Alexandria, Va. “Our diplomatic partnership division offers an opportunity for diplomats to interact not just with the State Department but with business leaders and state and community leaders. This evening, we are fortunate enough to have all of these groups represented here.” 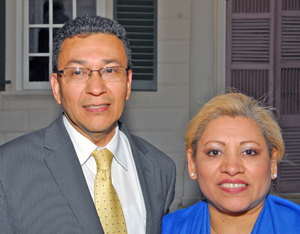 Oscar Chávez Valiente, deputy chief of mission at the Embassy of El Salvador, and his wife Patricia attend a State Department reception for diplomats at Mount Vernon. 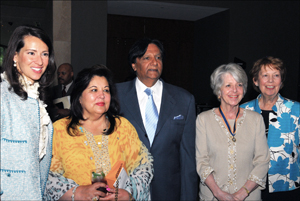 As guests sampled colonial delicacies such as apricot-honey grilled chicken with garden succotash, spinach salad with strawberries, and Virginia farm cheeses, Barbara Lucas of the MVLA offered the diplomats a quick history lesson.

“Mount Vernon has been hosting dignitaries from around the world for more than 200 years, from the Marquis de Lafayette to Queen Elizabeth II, Boris Yeltsin and Nicolas Sarkozy, so you’re certainly in good company,” she said. “Although George Washington was never officially an ambassador as were his contemporaries, he was no less masterful as a diplomat. He hosted many foreign dignitaries during the Revolutionary War, assuring diplomats from France, Spain and other countries that America could — and would — prevail, and that the notion of independence was viable. George Washington is widely revered for his character, courage and leadership, but without his diplomatic savvy, our American story would likely have had a different ending.” 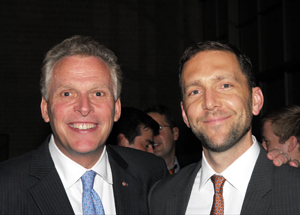 In 1853, the Mount Vernon Ladies’ Association raised the $200,000 necessary to save the 8,000-acre plantation estate from being sold off to speculators. The organization has run Mount Vernon ever since, and today it has a Board of Regents — still all women — representing nearly 30 states.

“From our earliest days, we have funded our efforts entirely with public support,” Lucas said proudly. “Our organization has never accepted any government funding, federal or state, and today, we’re telling the story of America’s first president like never before.”

In 2013, Mount Vernon welcomed over 1 million visitors, bringing the cumulative total to more than 85 million since 1860.

“We’re highlighting a great treasure to the diplomatic corps, who in turn are going to tell their friends and generate additional traffic to sites like this,” Selfridge said as foreign ambassadors took an early evening tour of Mount Vernon’s palatial grounds and well-preserved structures. “It’s a win-win for us. It’s also a great way to interact socially with diplomats who talk business all day.” 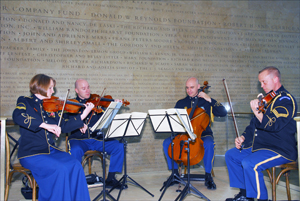 But business — and encouraging the kind of personal connections that foster trade and investment — is an unofficial part of the Protocol Office’s mission. Edward Reilly, global CEO of strategic communications at FTI Consulting, talked about the importance of foreign trade but, in the spirit of George Washington, promised to be brief.

“Our first president used just 135 words in his second inaugural address, so I will take my cue from him,” Reilly said, inciting laughter. “Most farmers here in Virginia were raising tobacco, but George Washington was one of the first to diversify to wheat. He was already looking for opportunities abroad, selling flour and whisky to faraway markets. He understood that commerce — the trading of things — was essential to the success of our fledgling nation, that economic development underpins all the hopes and dreams of our people and fuels social progress.” 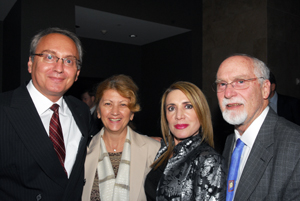 From left, Ambassador of Macedonia Zoran Jolevski and his wife Suzana Jolevska join Leila Beale and her husband Ambassador of Barbados John Beale at a reception at Mount Vernon.

As Virginia’s governor, McAuliffe took advantage of the presence of so many foreign diplomats to plug his state as an ideal trading partner and investment destination.

“You are truly in the greatest state of the United States. I would like all of you to do business in the commonwealth of Virginia,” he said, urging his audience to “take one fact from tonight’s event: Last week, Forbes magazine rated Virginia the number-one state in the nation to do business. Forget those other 49 states. They don’t really matter. We have it all for you, folks.”

Zoran Jolevski, who represents the Balkan republic of Macedonia, attended the Mount Vernon party with his wife Suzana. 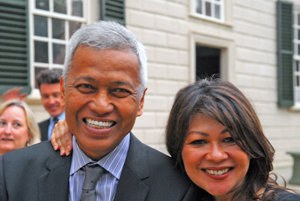 “This was one of the best events I have attended as ambassador here,” he told The Washington Diplomat. “I had the opportunity to visit the home of George Washington. I also spoke with the governor of Virginia, the president’s chief of staff, the chief of protocol and Virginia’s secretary of commerce.”

As a result of the connections Jolevski made that night, he’s now organizing a Macedonian business delegation to visit Virginia in September or October. His Vermont-size country of 2.1 million inhabitants is already a major tobacco exporter and hopes to boost such exports even more. 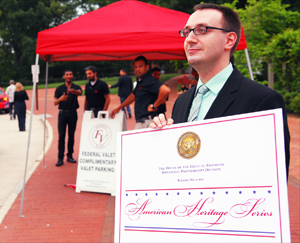 And John Beale, ambassador of Barbados, used the event to tell McAuliffe about the historical connection between his Caribbean island and the Revolutionary War.

“I enlightened the governor on the fact that George Washington went to Barbados because of his brother Lawrence, who was sick with tuberculosis. While there, George contracted smallpox but was cured by a doctor, so he became immune,” he said, noting that by the 1770s, smallpox had reached epidemic proportions throughout the American colonies, eventually killing 100,000 people. “I jokingly told him that if George had not gone to Barbados, maybe U.S. history would have been different.”

As the reception was winding down, Selfridge spoke briefly to The Diplomat about his new position at the State Department. A regular golf partner of President Obama’s, Selfridge has served stints in the private sector as a public affairs consultant and has worked for various presidential campaigns, including Al Gore’s in 2000, John Kerry’s in 2003 and Barack Obama’s in 2008. After President Obama’s inauguration, Selfridge was named Vice President Biden’s director of advance, becoming deputy assistant to the president and director of advance and operations at the White House in 2011. 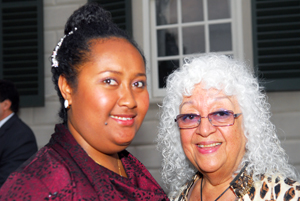 “Protocol chief is a unique role. Gender is not all that important,” Selfridge said, noting that what is important is “to show courtesy and respect.”

Selfridge, who will also be in charge of Blair House, said his priority is to “preserve the traditions” of the office. 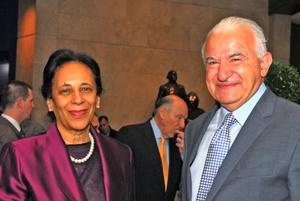 “Historically, protocol plays a pretty important role, especially in the modern era. With this president, we have a great partnership with the White House, both for visits to Washington [for foreign heads of state] and when the president goes overseas,” he said.

“We’re doing what a lot of government agencies are having to do: find ways to continue all that we’ve been doing — outreach with the diplomatic corps and hosting great events with foreign leaders — on a smaller budget. It’s important for today’s public servants to do that.”

Selfridge said his background as advance chief at the White House has prepared him well for his new job.

“The logistics are a natural match. You get to know how events are run, and what the president and secretary of state look for. This job travels with the president,” he said. 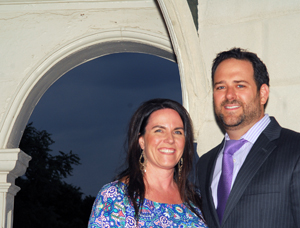 For Selfridge’s first overseas trip, he flew with Obama to Europe in early June for the G-7 summit in Brussels and the 70th anniversary of the D-Day invasion on the beaches of Normandy, France. A few weeks later, he led a four-day trip to Seattle as part of the Experience America program, which allows Washington-based ambassadors to travel within the United States as an organized group and meet with state and local officials. 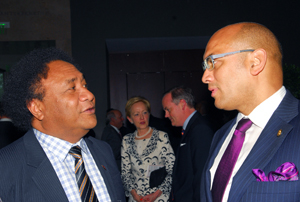 “Experience America gets ambassadors out of D.C. and showcases the rest of America. It gives them new cultural and geographic exposure,” said Selfridge.

The Seattle trip, scheduled for June 25 to 28, included meetings with top officials on the city’s eco-friendly development; tours of major universities and manufacturing facilities, including Boeing’s airplane factory; and panel discussions with the Gates Foundation as well as representatives of Seattle-based Fortune 500 companies like Microsoft and Amazon. The Diplomat participated in the trip; stay tuned for exclusive coverage.