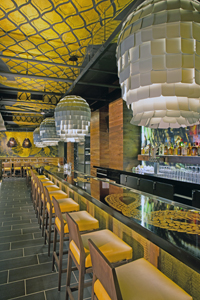 All over town, chefs are taking it to the streets in brightly colored food trucks to ply their wares to hungry officers workers and tourists, but Nat Ongsangkoon and Dia Khanthongthip reversed the trend when they brought classic Thai street food to Soi 38, the elegant new restaurant they opened in April.

There is a long tradition of excellent street food in Thailand, and Sukhumvit Soi 38 — a side street in Bangkok after which the restaurant is named — is one of the city’s most renowned late-night market and street food districts. There, locals and visitors alike gather around rickety tables after conventional restaurants close to sample authentic Thai dishes until the wee hours of the morning.

Nat Ongsangkoon and Dia Khanthongthip offer Washingtonians a taste of the classic Thai street food they eat when they visit their native Bangkok at their new restaurant, Soi 38.

Though they have been operating the successful Thai Place a few blocks from Soi 38 for the last decade, the husband-and-wife team wanted to offer American diners the type of foods they eat when they visit their native Bangkok — “real Thai,” in other words. They saw Soi 38 as an opportunity to move away from the American approach to Thai cooking, which is sweeter and less complex than the spicier, intricately seasoned versions back home.

The partners teamed up with a friend, chef Mitchai Pankham, who brings to the mix a passion for the cuisine of his native northern Thailand, and they put together a menu that offers a combination of recognizable dishes along with brand new ones. But even the seemingly familiar staples emerge from the kitchen with new dimensions under Pankham’s expert ministrations.

The menu is divided into large and small dish categories and diners can choose among appetizers, soups, salads, rolls, main courses, curries, and noodle and rice dishes.

The “warm up” plates are primarily simple meat dishes. The Kor Moo Yang, grilled pork neck served in small slices with fresh lime and chili sauce, is tender and well seasoned. Gai Hor Bai Toey — small bites of chicken individually wrapped in pandanus leaves, fried and then served with sesame sauce — must be labor intensive to make but the subtle flavor imparted by the pandanus leaves makes it worth the effort. Meanwhile, the excellent Prik Tod — battered and fried green chili stuffed with chicken and shrimp and served with a creamy Sriracha — is dense but isn’t heavy, despite the frying. Nor is it very spicy, despite the three-chili rating (the highest the restaurant gives).

Even some of the more conventional offerings such as the Tom Ka Gai soup (chicken, coconut milk, lemon grass soup, roasted chili paste) stand out from the pack. A less common soup, the Tom Yum Kradook Moo (spicy lemongrass soup made with bone-in pork spare rib) was equally well done.

Among the more unusual ingredients making an appearance on the menu is fish maw, or swim bladder, a gas-filled organ that helps a fish control its buoyancy. At Soi 38, it is baked and served in the Yum Sam Krob salad with fried squid, roasted cashews and spicy lime sauce. A delicacy in some Asian cultures, prior to latex, the bladders were used as condoms. For the less adventurous, the Yum Goong Fu salad — finely chopped, with heavily battered deep-fried shrimp, roasted cashews, red onions, lime, chili and fresh julienned mango — is an uncommon but approachable choice.

For sheer visual appeal, the Khao Pad Sapparod pineapple-fried rice served in a vertically split pineapple shell takes the prize. Made with shrimp, cashews and carrots, it is as tasty as it is attractive.

The flavors of chef Pankham’s northern Thailand pop up in the noodle category with the Khao Soi, a curry sauce-based dish made with both crispy and soft egg noodles, with a chicken leg thrown in. The dish arrives with small side bowls of chopped onion, sour cabbage and hot chili sauce, which adds punch to the otherwise mild noodles. 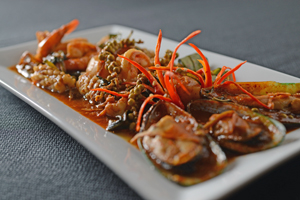 Seafood appears throughout the menu in various guises. One of the most interesting is Pad Cha Talay, a combination of mussels, squid and shrimp sautéed with green and orange peppers, young peppercorns still on the stalk, rhizome and red chili sauce. This is a three-chili-rated dish and this time they aren’t kidding.

The heat-rating index at Soi 38, which goes from zero to three chilies, does not seem entirely consistent, which may be a reflection of individual tolerances to different spices more than anything else. The restaurant is accommodating and any dish can be made more or less spicy as requested. Soi 38 is accommodating in general about the way they cater to their guests. The chef will convert almost any dish into vegetarian or vegan options. The menu also includes many gluten-free options, a nod to one of the owners’ children who is gluten intolerant.

Per Thai tradition, the desserts at Soi 38 are more of an extension of the main meal than a sweet ending. In addition to a superior mango and sticky rice, the menu offers a rich Thai custard, a fried banana roll, Thai gelatin wrapped in pandanus leaves, and a warm coconut milk with three flavors of tiny sticky rice flour dumplings. There is also a dairy-free and gluten-free coconut milk ice cream. The texture of this not-too-sweet confection is unlike milk-based ice cream but is satisfying nonetheless.

Under a watchful reptilian eye above the bar, popular mixologist JP Caceres shakes up original cocktails and some power-packed versions of old standards. The potent Emperor’s Punch — a blend of whiskey, fresh lemon, tamarind syrup, Thai herbal tea and chili aromatic bitters — is elegantly served up in a teapot for two. The much overdone piña colada get a new lease in life in the Menehune’s Painkiller, featuring two kinds of rum for added dimension, house-made coconut orgeat syrup, orange juice and yuzu. Caceres also offers a unique Singapore Sling — a tropical dream of gin, Luxardo cherry, Benedictine liqueur, clarified lime, chili aromatic bitters, sloe gin and pineapple juice. For those not imbibing, Caceres has developed refreshing house sodas such as lime-ginger and lemon-lemongrass fizz. 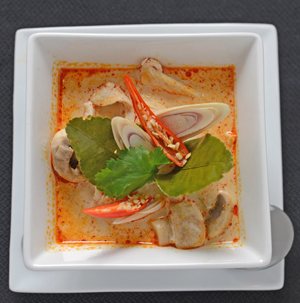 At Soi 38, the partners did not try to recreate the atmosphere of the Sukhumvit district, but they did hint at its essence by tapping noted Baltimore street artist Gaia, whose striking murals are normally seen outdoors. His golden creatures, both real and mythic, command Soi 38’s interior, which is punctuated by richly understated browns of wood and leather. An Asian dragon snakes its way across the ceiling to confront a peacock and a tuk-tuk (an auto rickshaw taxi common in Asia) while an elephant with a decorative ax stands guard by a cranky-looking rooster (you get the feeling there is a wonderful story here, if only you could decipher it). Interesting lamps over the bar look as if they’re made of scales, and some say they are dragon eggs. Floor-to-ceiling windows flood the space with light and give diners a prime perch to watch the busy D.C. street life outside.

While Bangkok’s street life is the inspiration behind Soi 38, it does not mimic the frenetic pace of its eponymous nighttime food market, never staying open past 10:30 p.m. But the seats are a lot more comfortable, and with the heat of summer bearing down on us, the air conditioning is a nice break from the outdoors. The owners do, however, plan to add a large outside seating area for the summer.

The food may also not be the bargain you’d get in Bangkok (it is slightly more expensive than Thai Palace), but it’s well worth the price to sample an authentic taste of a cuisine that’s become increasingly Americanized and, some say, sanitized. Soi 38 definitely veers off the beaten path of mainstream Thai food in D.C., venturing into welcome territory.