A detail from “S.A.C.R.E.D.,” an artwork by Ai Weiwei, is featured in the searing new documentary “Ai Weiwei The Fake Case” about the famed Chinese artist and political dissident.

At the Beijing airport in April 2011, the Chinese police arrested Ai and squirreled him away in a secret jail for 81 days, followed by house arrest. Ai’s outrageous detention sparked a global media campaign for his freedom, making him the world’s most famous political prisoner. Finally, Chinese prosecutors charged Ai’s company Fake Ltd. with tax evasion. Ai wryly notes that while the prosecution’s case is a fake case about a fake company, it’s also a real case about a real company.

In “Ai Weiwei The Fake Case,” Ai’s movements are much more restricted than in Alison Klayman’s earlier, informative documentary released in 2012, “Ai Weiwei: Never Sorry.” Currently under probation from the tax evasion charges, Ai is not allowed to do much outside his house besides go to work. He lives under constant surveillance by security personnel and 18 video cameras in his home and studio, even in his bedroom. His passport remains impounded, so he cannot leave China to attend the installations of his work at leading museums and galleries around the world.

Even under these restrictions, Johnsen seems to have plenty of access to Ai, certainly enough to make an enlightening documentary. The extensive footage of Ai is fortunate because he remains a fascinating character to watch on the screen. By now, he and many of his family members and colleagues are naturals on camera. But the government’s campaign to intimidate Ai has clearly affected his well being, including his sleep and memory. Yet the oppressive conditions fail to keep Ai from continuing to make art that creatively challenges the Chinese government’s perennial violations of human rights and freedom of speech.

‘Violette’: A Writer Is Born 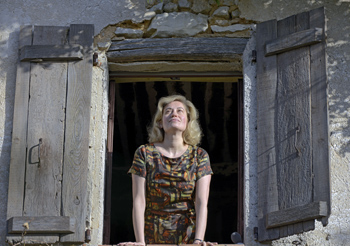 Award-winning French writer-director Martin Provost follows up on the success of 2008’s “Séraphine,” a stirring biography of the painter Séraphine de Senlis, with his second biopic about a female artist using a single name for a title. “Violette” profoundly explores two decades in the packed life of French writer Violette Leduc, a pioneer in French feminism. Provost’s assured direction, with naturally lit images expertly photographed by cinematographer Yves Capes, enables a stark mise-en-scène that fills up a distinctive literary world.

Illuminating the silver screen with her presence, versatile French leading lady Emmanuelle Devos (“Coco Before Chanel,” “Read My Lips”) thrives in a tour-de-force performance as the obsessive Leduc, who was born illegitimately in the early 1900s. Sandrine Kiberlain (“The Women on the 6th Floor,” “The Apartment”) is also no slouch portraying Leduc’s contemporary, Simone de Beauvoir, whose legendary presence is not easy to live up to.

The structure of “Violette” is built on an intelligent screenplay whose time arc begins during World War II, when Leduc is acting as the cover wife of Maurice Sachs (Olivier Py), a homosexual, half-Jewish writer tucked away in rural France for safety.

After the war, they move to Paris. Inspired by Beauvoir’s “She Came to Stay,” Leduc writes her own autobiographical novel, “L’Asphyxie” (“In the Prison of Her Skin”). She hands her book to Beauvoir, an established literary and feminist celebrity with whom Leduc becomes infatuated. Impressed with what she reads, Beauvoir is convinced she is responsible for making or breaking Leduc’s legacy as a singular writing talent.

Unstable Leduc becomes a protégée of the disciplined Beauvoir, who brings Leduc into her intellectual circles. Leduc and Beauvoir develop an intense lifelong relationship based on their mutual passions, but the latter never allows Leduc to have the physical love affair that she so desired. 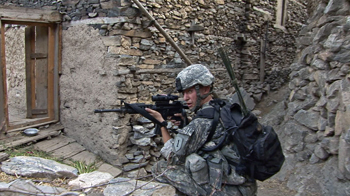 “Korengal” follows up on the powerful Afghanistan war documentary “Restrepo,” interviewing soldiers whose perspectives have been changed by war.

“Korengal,” the new Kickstarter-funded documentary by American director Sebastian Junger (also a journalist and author) comes through as a deserving, meditative sequel to the acclaimed 2010 Afghanistan war documentary “Restrepo.” Junger directed “Restrepo” along with the late British-American filmmaker and photojournalist Tim Hetherington, who was killed in 2011 from shrapnel wounds sustained while reporting on the civil war in Libya.

Hetherington shot “Restrepo” and a large portion of the first part of “Korengal” when he and Junger spent about 10 months in 2007 to 2008 as embedded reporters with the U.S. Army in the tough, six-mile-long Korengal Valley of Afghanistan, close to the Pakistan border. On an everyday basis, they lived and worked with the soldiers who defended the distant outpost of Restrepo, named for a fallen medic colleague.

Much of the action-packed “Restrepo” was photographed in the thick of battle with harrowing combat scenes showcasing the thrill of the fight. “Korengal” features the same soldiers and officers, but their perspectives are entirely different as they take the time to reflect on their actions. Hetherington’s footage of the military unit’s assignment in Afghanistan is supplemented by substantive post-deployment interviews of the men that took place in Italy in 2008. The talking heads are shot in an evenhanded fashion belying the partners’ journalistic backgrounds. These generally calm, though at times angry, contemplations add new depth to the soldiers’ stories first told in “Restrepo.”

The authentically emotional subjects honestly discuss their psychological struggles dealing with the complex aftermath of battle. Everybody mourns for their dead brothers in arms killed in action. Nearly as universal is the loss of focused purpose and deep camaraderie — practically a sustained high — that the soldiers had developed working together in tight quarters during their tour of duty in the Korengal Valley. One soldier is still an enthusiastic, gung ho warrior who relishes taking out the enemy: “Shooting people. It’s always fun shooting.”

‘Whitey’: Mobster Made for Movies 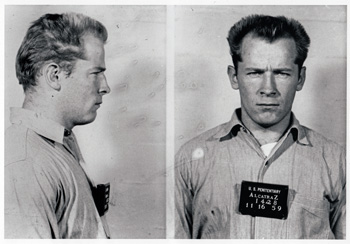 Whitey’s open campaign of terror was especially striking in comparison to the successful public service career of his brother, William Bulger, who served as the president of the University of Massachusetts system. Whitey apparently prevailed with impunity for so long because he allegedly enjoyed an impenetrable extra shield of protection as an invaluable informant for local and state police, the FBI and Justice Department.

When the jig was up and law enforcement officers were about to close in on Whitey, he was tipped of by a friendly, corrupt FBI agent who had served as his handler, allowing Whitey to escape without a trace in 1994. After 16 years on the lam, he was finally captured in June 2011 hiding in plain sight in a rented apartment in Santa Monica, Calif.

Whitey’s subsequent trial in 2013 on racketeering charges served as a platform for he and his legal team to air their accusations of widespread corruption within the local, state and federal law enforcement and justice systems. A sweeping network of individuals allegedly benefited from Whitey’s collaboration and used him for their own ends, turning the other cheek in the face of Whitey’s growing collection of criminal misdeeds, including 19 alleged homicides. Nobody wanted to kill their golden goose, so Whitey literally got away with murder — at least for three decades.

“Whitey: United States of America v. James J. Bulger” does not figure out all the answers to the mystery of the symbiotic relationship between Whitey and government officials; that will likely never happen. But Berlinger collects and displays plenty of revealing information, including archival and surveillance footage. The juiciest tidbits are in the form of candid interviews from current and former police officers, judges, government officials, Whitey’s criminal associates and his enemies, as well as the family members of his victims. 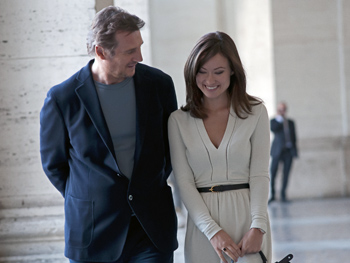 The star-studded ensemble cast of “Third Person” delivers solid performances across the board, including standout turns by Liam Neeson, Adrien Brody, Olivia Wilde, Mila Kunis and Kim Basinger. They transform the characters sketched in Haggis’s screenplay into living, breathing beings in the flesh. Alas, the inherent mystery underlying most of Haggis’s script means that many of the characters are just not very developed. So there is only so much even talented actors can do to help the viewers connect with the characters.

In Paris, which takes up the bulk of the screen time, the story focuses on Michael (Neeson), a graying Pulitzer-prize winner who has failed to deliver on his unfulfilled potential since the success of his first book. While ensconced in a hotel room, he’s working to nail it with his latest novel while entertaining visits from Anna (Wilde), a decades-younger writer with whom he has a complicated relationship. It seems he has dumped his estranged wife Elaine (Basinger) and left her behind, but she still manages to reach out and touch him over the long-distance telephone lines.

Meanwhile, in an American-themed bar in Rome, ethically challenged American wheeler-dealer Sean (Brody) falls for and seeks to help enigmatic Monika (Israeli actress-producer Moran Atias), a Romani woman searching for her daughter whose trustworthiness is questionable.

Finally, in New York, frazzled, high-strung Julia (Kunis) must get her act together to defend herself against accusations of child abuse, with the assistance of her lawyer Theresa (Maria Bello), in an effort to win a nasty custody battle and take back her son from her acrimonious former husband Rick (James Franco).

The triple plot threads blend together at the edges, dropping hints and details that move toward filling out the story, depending heavily on a plot gimmick. The result is engaging and thought provoking enough to be worth a viewer’s time, but everything fails to add up and gel together to really succeed. Perhaps Haggis bit off more than he could chew this time around.

A screening of Yasujiro Ozu’s “Tokyo Twilight” (Fri., July 25, 8 p.m.) marks the closing of the exhibit “Kiyochika: Master of the Night The City Nights.”