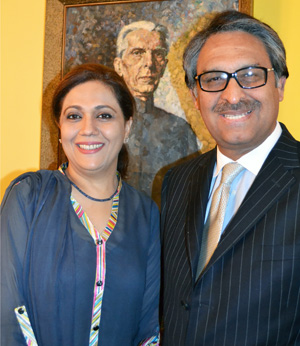 Shaista Jilani was barely 20 and newly married. Their first posting was Saudi Arabia. Shortly after arriving in Riyadh, she and her husband were out for a ride in a country that does not allow women to drive, even if they are diplomats or married to one.

Pakistani Ambassador Jalil Abbas Jilani and his wife Shaista Jilani pose in front of a portrait of Muhammad Ali Jinnah, the founder of Pakistan.

“A policeman stopped our car, told me that my wife would have to put on her scarf,” recalled Pakistani Ambassador Jalil Abbas Jilani. “The policeman demanded that she put it on immediately. ‘You are right,’ I told the policeman. ‘I already told her to do that but she doesn’t listen.’ The policeman just laughed.”

Throughout all their postings and 30 years together, the Jilanis have always found a way to share a laugh and enjoy time with their three sons while representing Pakistan around the world, from Saudi Arabia to Australia to Belgium.

Ambassador Jilani, who took up his Washington posting earlier this year, joined us for tea at the residence while waiting for a Pakistani delegation to arrive at Dulles Airport. Shaista said that he was the talkative one while she was “the quiet one.” He denied that and proceeded to tell us story after story about their life together and their homeland. “We have good laughs,” she told us, “but you can see who’s ‘the quiet one.’”

The couple feels at home here. Their first posting to Washington was from 1995 to 1999. They lived in McLean, Va., with their two oldest boys, who at the time attended Franklin Sherman Elementary School. When they moved back to D.C. into the country’s handsome residence on S Street just off Embassy Row, the family hosted a luncheon for their sons’ former teacher, Patricia Brownley.

“The boys hugged her and looked at their teacher with great affection. They were all thrilled to see each other again,” Shaista said.

“Their school was wonderful. Our kids had friends here they haven’t had in any other posts,” she added. “There was such respect and love in this elementary school.”

Ahmed is now 27 years old and working for the United Nations in Rome. Amir, two years younger, is in Australia and works with the Centre for International Economics but is returning to Washington to get his master’s degree at Georgetown University. Their youngest son, Talha, is 16 and a rising junior at the School Without Walls.

Along with taking care of three boys wherever they lived in the world, Shaista has always devoted her time to various charity programs, particularly those related to education and women. 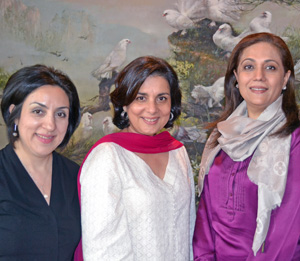 In Islamabad, she was the education secretary of the Pakistan Foreign Office Women’s Association for seven years. The group arranges scholarships for deserving Pakistani students, raises funds for members of the Foreign Office, and supports those with physical and mental disabilities. While her husband was posted to Brussels, she served as president of the Asia Pacific Women’s Association, organizing excursions, fundraising events and cultural and education programs.

When her husband returned to Pakistan to become foreign secretary, Shaista rejoined the Foreign Office Women’s Association as its president. The group’s annual fall bazaar was so important to Shaista that she agreed to come to Washington only after the early December event was over.

“Due to all this charity work, when we were here before and wherever we have been posted, she has always been my introduction to every important section in society,” the ambassador said. “She has been my invitation to many homes…. By meeting the spouse, you learn about the country and the ambassador.”

After becoming Pakistan’s foreign secretary, Jilani, a former ambassador to the European Union, did not expect to be sent abroad again. But Prime Minister Nawaz Sharif decided to appoint the veteran envoy to Washington after his political party won an election that marked the first successful completion of a democratically elected government’s term in Pakistan’s tumultuous 66-year history.

The Jilanis had almost no notice about the appointment. He was called to a high-level meeting and she was at the market. Her cell phone rang and it was her sister who told her the news. “It’s all over television,” she told her flabbergasted sister. Shaista spent the rest of the day and evening fielding phone calls and watching the breaking coverage on the air. They only had a few weeks before they had to leave.

In a sense it was a trial by fire for the career diplomat, who was sent into a cauldron of mutual mistrust and acrimony. Both Washington and Islamabad have deep grievances against the other. Many Pakistanis are angered by American drone strikes that they say are a violation of the country’s sovereignty while complaining about Washington’s historical fickleness toward the region — and its lack of recognition for the large number of Pakistani troops who’ve died in the “war on terror.” On the flip side, the United States often views Pakistan as playing a double game, coddling the very terrorist groups it’s supposedly targeting while gladly taking U.S. military assistance. 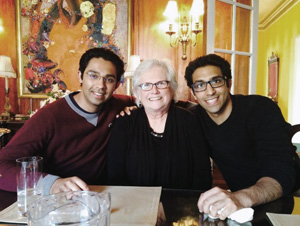 Ahmed Jilani, left, and his brother Amir reunite with their former teacher at Franklin Sherman Elementary School, Patricia Brownley, at the Pakistani Residence.

It seems every few months there’s another bump in the rocky relationship — at the time of Jilani’s appointment, a U.S. drone attack killed Pakistani Taliban leader Hakimullah Mehsud in North Waziristan. But Jilani does his best to put a positive spin on the prickly alliance, saying there is a “degree of maturity in the relationship between the two democracies, Pakistan and America — more so than when I was here before.”

He added: “We have good cooperation, especially on security, fighting terrorism and extremism.”

Indeed, despite the constant friction, Washington can’t exactly turn its back on the nuclear-armed nation, which since its independence in 1947 has been racked by military coups, political assassinations and ethnic, sectarian and religious violence. Today, rising Islamist extremism in the Muslim-majority nation of 180 million has made it one of the most dangerous in the world. Most recently, Islamic terrorism has reached into the commercial capital of Karachi, where the country’s largest airport was stormed by 10 militants last month. The Pakistani Taliban claimed credit for the attack, which killed 36 people, saying it was in retaliation for the death of their former chief, Mehsud.

“I want to express our gratitude to the U.S. for helping us,” the ambassador said of the airport assault. “Trust and cooperation is paramount. We want Americans to remember how we helped defeat the Soviet Union…. And we helped the U.S. become the sole superpower. Some of the credit lies with Pakistan, who served as a frontline state.”

“He has a lot on his plate,” Shaista said. “Besides working within the Congress, the administration and business, he has people-to-people work, getting together with local Pakistanis, many of whom have been very successful in the United States.

“We have divided our role,” she said, “but we both build bridges between the two countries.”

Both will also have a critical role to play in countering the perception that Pakistan is becoming an intolerant state. In addition to having harsh blasphemy laws that have cowered religious minorities, women still face barbaric repression, especially in deeply conservative rural areas. In May, a pregnant woman was stoned to death by her own relatives in front of a Pakistani courthouse for marrying a man in defiance of her family’s wishes. That man, incidentally, admits to killing his first wife in order to be with the second.

The Jilanis will be working to show Americans a different side of Pakistan — one that encourages its women and isn’t usually portrayed in news headlines. “We have women who are fighter pilots, corporate CEOs, cabinet members, speaker of the parliament and 30 percent of parliament’s members,” said the ambassador, whose predecessor was a woman. “We have more and more women professionals, including 60 to 70 percent women students in medical, engineering, chemical engineering and automotive engineering schools.”

The ambassador thought it was an opportune moment to praise the woman who has been in the public eye with him for decades.

“She has been a great support. She is open, frank and makes friends with ease,” he said. “I always had great satisfaction knowing that she was taking care of our children and that peace of mind is of paramount importance,” he added.

“For dinners and receptions, she always adds her personal touch. She makes our guests feel at home, comfortable. You can’t leave that to other people,” he said. “She is projecting the right image of our country.”