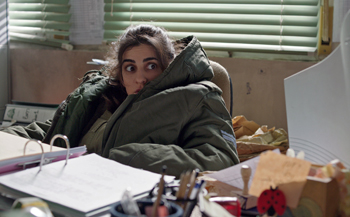 Established in 2002, the Tribeca Film Festival recently honored a variety of international films and filmmakers. Many of the winners will be making their way soon to D.C. theaters and other distribution channels.

Israeli writer-director Talya Lavie’s “Zero Motivation” took Tribeca’s top honor for her darkly comedic portrayal of everyday life for a unit of young female Israeli soldiers. The jury said the film “follows young women who must find their place and establish their identity in a world normally dominated by men and machismo. They do so with humor, strength and intellect. The filmmaker mirrors these same qualities.”

With “Zero Motivation,” Lavie also claimed the Nora Ephron Prize. Jurors gushed that, “In her unique and ambitious first feature, this filmmaker deftly handled such difficult themes as the military, sexism, love, ambition, and friendship. This filmmaker also pulled off the awesome feat of managing multiple characters and storylines.”

For the Colombian-U.S. coproduction “Manos Sucias,” Japanese-Polish-American filmmaker Josef Wladyka’s won Best New Narrative Director. The film follows a desperate fisherman and a naïve young man who embark on a dangerous journey trafficking drugs up Colombia’s Pacific coast. “We have chosen a filmmaker whose journey should truly be an example to all of us about the commitment to the process of researching and developing a film,” the jury said. “Not only did this director spend several years immersed in a marginalized community in order to tell the story in the most truthful way possible, he impacted and contributed to that community.”

Italian actress Valeria Bruni Tedeschi won Best Actress playing Carla for “Human Capital,” the story of two families bound together after a cyclist is hit by a car the night before Christmas Eve. “In her elegant portrayal of a profoundly conflicted wife and mother, this actress crafts a complex performance of a woman wrestling between love, family and obligation,” the jury said.

Cinematographer Damian García and director Alonso Ruizpalacios took the prize for the Mexican film “Güeros,” which “perfectly captured the energy and hope of the youth in its nation’s capital,” according to the jury.

French writer-director Guillaume Nicloux’s screenplay “put a bodybuilder, a gypsy, a prostitute and a world-renowned poet in handcuffs at a dinner table and made it feel right,” the jury said of “The Kidnapping of Michel Houellebecq,” which depicts the abduction of an author by three amateur kidnappers.

Best Editing in a Documentary Feature

Dutch editors-writers-directors Sabine Lubbe Bakker and Niels van Koevorden’s “Ne Me Quitte Pas” was lauded by the jury for “finding luster in the most unlikely places” in “their bittersweet portrait of two Belgian boozers.”

“The Phone Call” by British writer-director-producer Mat Kirkby stood out by demonstrating “the sheer power of the human voice to convey compassion and understanding via a one-on-one telephone conversation,” the jurors said.

“Nesma’s Birds,” by Iraqi directors Najwan Ali and Medoo Ali, was praised by the jury as “tough, intimate and with a clarity of vision. The winning film is a story of a fiercely strong young woman who is unapologetically herself.”