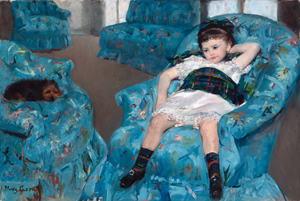 It is well known among fans of late 19th-century impressionists that Mary Cassatt and Edgar Degas enjoyed a long friendship based on mutual respect and admiration.

What might be less known is just how much Cassatt, an American 10 years younger than Degas, influenced the great French painter’s own work. A lovingly curated, compact new exhibition at the National Gallery of Art explores this glorious artistic relationship, providing new depth to our understanding of both artists.

“It was very much a kind of dialogue, rather than a monologue,” said Kimberly Jones, the gallery’s associate curator of French paintings, in describing the way the two painters worked.

Indeed, the exhibition explores this artistic dialogue throughout four galleries focusing on the height of Degas and Cassatt’s artistic alliance from the late 1870s through the mid-1880s. Included are more than 70 oil paintings, pastels and works on paper — etchings, lithographs, monotypes and drawings — several of which were once in the artists’ personal collections.

Mary Cassatt’s “Little Girl in a Blue Armchair” is among the highlights of an exhibit at the National Gallery of Art.

Cassatt stated that her first encounter with Degas’s art “changed my life,” while Degas, upon seeing Cassatt’s art for the first time, said “there is someone who feels as I do.”

Cassatt’s “Little Girl in a Blue Armchair,” an iconic 1878 oil painting, is the exhibition’s focal point and the only example of a painting on which the two artists actually collaborated. Illuminating wall text in the exhibition describes how Degas, who was constantly aiming to improve his own “finished” paintings, changed the background on Cassatt’s canvas, providing the room with greater dimension and light. In addition to a letter that Cassatt wrote to her dealer mentioning Degas’s involvement with the work, modern-day techniques such x-radiographs and infrared images that reveal changes beneath the paint surface provide clear evidence of Degas’s influence.

The painting itself is a portrait of youthful repose and, typically for these painters, conveys notions of a lush, privileged life. It is arguably Cassatt’s first true impressionist painting, according the museum. Degas, one of a small group of celebrated French impressionists, was so taken by Cassatt’s skills that he invited her to show her work with the group in France. Cassatt became one of only three women, and the only American, ever to join the French impressionists.

Nearby, Degas’s “Rehearsal in the Studio” employs rarely used egg tempera (pigments mixed with egg yolks) and is one of many compositions devoted to ballet that the artist produced in the 1870s. Degas was fascinated with the mechanization of the human body that the rigorous discipline of ballet imposed. His meticulous yet gauzy oil paintings depict dance as elegant, serene and disciplined.

Cassatt’s “At the Theater: Woman with a Fan” is typical of her fascination with the stage and draws the viewer in with a glimmering fan that actually serves as a barrier between the subject and the stage.

Degas, while often preoccupied with the arts and bourgeois French society, changed focus, at least momentarily, later in his career when he painted more rugged scenes of horse races. “Scene from the Steeplechase: The Fallen Jockey,” injects the exhibition with some earthy masculinity — the browns of the horses glisten as they gallop across the canvas. Meanwhile, a rider lays prone in the foreground, his shimmering pink shirt splashing the palette with its only soft color. 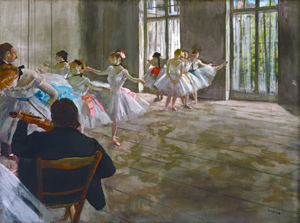 The exhibit, which includes Edgar Degas’s “Rehearsal in the Studio,” examines how the two 19th-century impressionists influenced one another throughout their long friendship.

Painted in 1866 for exhibition at the Paris Salon, this painting marked a transition from the classically inspired history paintings of Degas’s youth toward the depiction of subjects drawn from modern life that would dominate his art for the rest of his career. It is also one of the best examples of Degas’s obsession with reworking his own art. The artist refinished the painting multiple times and it remained in his studio at the time of his death.

Cassatt’s “The Visitor,” reproduced twice in 1881, proves her astonishing ability to locate and depict the arc of the human form. The etching is dark, elegant and beautiful.

Meanwhile, “Child Picking a Fruit,” an 1893 oil on canvass also by Cassatt, is an explosion of cool color. The mother’s bright pink dress, framed by the most soothing green this side of Ireland, represents the artist’s growing interest in family and maternity.

Although their friendship endured until Degas’s death in 1917, the two artists’ interactions decreased after the eighth and final impressionist exhibition in 1886. Nevertheless, Degas continued to acquire Cassatt’s work while she promoted his to collectors back in the United States. The close working relationship certainly gives rise to the question of whether the relationship veered from the platonic to the romantic. If it did, there is no evidence of it here — or apparently anywhere. Regardless of the artists’ relationship status, there was no mistaking Cassatt’s grief when Degas died in 1917.

“He was my oldest friend here and the last great artist of the 19th century,” she said.

Their important friendship makes for a beautiful exhibition at the National Gallery of Art.

through Oct. 5
National Gallery of Art
located on the National Mall between 3rd and 9th Streets at Constitution Avenue, NW
For more information, please call (202) 737-4215 or visit www.nga.gov.