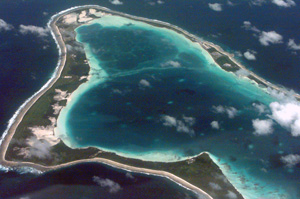 Diego Garcia, a remote speck of land in the middle of the Indian Ocean, rarely makes news. But in recent months, the coral atoll has grabbed the attention of online conspiracy theorists who claim the missing Malaysian Airlines jet secretly landed there as part of some clandestine U.S. military operation.

This 1998 aerial view shows the U.S. Naval Station on Diego Garcia, a remote speck of land in the Indian Ocean administered by Great Britain, which signed a 50-year treaty with the United States in 1966 allowing it to build a military outpost there.

The obscure island even got a mention in the latest installment of the Fox TV show “24,” as super-agent Jack Bauer rushes to thwart terrorists who’ve hijacked a group of American drones at the exact time that the U.S. president is trying to convince Britain to extend a treaty allowing the use of drones on its base in Diego Garcia.

As dramatic as these references are, they do hint at the island’s strategic value just as the United States, Great Britain and Mauritius prepare for talks on the future of the Chagos archipelago, which includes Diego Garcia.

At issue: Who, exactly, owns this tiny island 1,000 miles east of Mauritius and 2,900 miles northwest of Australia?

In 1965, three years before Mauritius won independence, Great Britain detached the Chagos archipelago from the rest of its then-colony and created the British Indian Ocean Territory to administer the islands from London. The following year, it signed a 50-year treaty with the United States that allowed Americans to establish a military outpost on Diego Garcia; in return, it secured a discount on U.S. Polaris missiles. In the process, Britain kicked out about 2,000 native Chagossians to make way for the American outpost.

In the ensuing years, the Pentagon has spent untold billions of dollars turning Diego Garcia into a satellite tracking station, an enormous air and naval base with a 12,000-foot runway from which bombing raids on both Iraq and Afghanistan have been launched, and — some claim — a secret “black site” where CIA personnel detained and tortured suspected al-Qaeda terrorists.

At present, 1,700 military personnel and 1,500 civilian contractors live on the island, which is off-limits to tourists and requires U.S. government permission to visit. 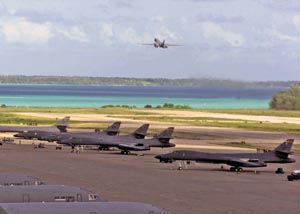 B-1B Lancer bombers take off from Diego Garcia at the start of the war in Afghanistan in October 2001. The Pentagon has spent untold billions of dollars turning Diego Garcia into a satellite tracking station, an enormous air and naval base and, some claim, a secret CIA “black site.”

The 1966 treaty expires in December 2016, but requires Washington and London to renegotiate the lease two years earlier — by the end of 2014. Mauritius is lobbying to be included in those talks and, ultimately, regain control of the island. At the time of the treaty, Britain said the Chagos islands would be returned to Mauritius when they were no longer required for defense purposes, a vague definition that’s open to legal interpretation. So far, the United States has not indicated whether it would sideline Britain to give Mauritius a say in the talks.

“Our concern is about sovereignty,” said Milan J.N. Meetarbhan, the Mauritian ambassador to the United Nations. “What we want is that after 2016 … there would be an agreement between the U.S. and Mauritius on the use of Diego Garcia as a military base. The terms of that agreement would in no way be less than the terms of the present agreement with the U.K.”

Meetarbhan, who is based in New York, spoke to The Washington Diplomat during a visit here arranged by Mercury Public Affairs, a PR firm representing the Mauritian government.

Despite its remoteness from Mauritius, the envoy said, “We believe the excision of Diego Garcia from Mauritius prior to independence in 1968 was a breach of international law. We’ve always said this was part of our territory, and we’ve reached a point now where we think there’s a very good window of opportunity to resolve this dispute.”

The Chagos archipelago consists of half a dozen main islands; Diego Garcia is the largest and southernmost of the chain.

“Diego Garcia has no native inhabitants,” Meetarbhan explained. “When the Americans first expressed interest in having a military base there, the British told them there was nobody living on the island. Subsequently, when the base was about to be set up, they found about 2,000 people there. All of them were forcibly deported to Mauritius.”

To date, the indigenous population has kept up calls to be resettled on the island. Complicating matters is Britain’s declaration of a 545,000-square-mile marine reserve around the archipelago. The reserve, announced in April 2010, is now the focus of a hearing by the Permanent Court of Arbitration (PCA), a United Nations-backed tribunal based in the Netherlands. The PCA plans to hold a series of proceedings in Turkey, but they will be closed to the public. 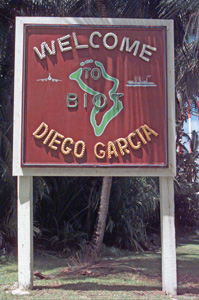 A welcome sign stands on the island of Diego Garcia, which is home to 1,700 military personnel and 1,500 civilian contractors but is off-limits to tourists and requires U.S. government permission to visit.

Yet a British Foreign Office cable from 2009 that was exposed by WikiLeaks raised suspicion that the marine reserve declaration was just a ploy to keep the Chagossians from ever returning to Diego Garcia. The memo quotes a British official as saying that “former inhabitants would find it difficult, if not impossible, to pursue their claim for resettlement on the islands if the entire Chagos Archipelago were a marine reserve,” contemptuously describing them as “Man Fridays.”

The memo also noted, however, that Mauritius’s main interest in the territory was its economic potential as a fishery, not its environmental protection — and that U.S.-U.K. stewardship of the island, even though it came at the cost of expelling the native population, has preserved its “pristine” condition.

The British government, which receives no money for leasing Diego Garcia to the Americans, declined to comment on the dispute, calling it a confidential legal matter.

But J. Peter Pham, director of the Atlantic Council’s Africa Center, says Meetarbhan’s argument is “absurd” and has no legal merit whatsoever.

“The fact is, Great Britain was the acknowledged sovereign of the British Empire’s East Indian Ocean territories,” Pham told us. “It chose to divide Diego Garcia and neighboring islands from the rest of Mauritius before independence, and then subsequently gave Mauritius independence and chose to lease Diego Garcia to the United States. Mauritius claims they had no right to redraw the border.”

By that logic, Pham said, southern Somalia must be returned to Kenya — the country that territory once belonged to before Britain gave it to Italy as a reward for the Italians entering World War I on the Allied side.

“There’s a domestic political agenda in Mauritius,” Pham added. “A small group of people who are descendants of those evicted by the British has formed a vocal constituency, which plays well domestically. Two, Mauritius is largely irrelevant, but this raises its profile considerably.”

Pham says there’s “no realistic chance” of Mauritius getting what it wants, no matter how hard it lobbies the Pentagon or Congress. 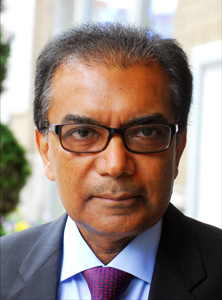 Milan J.N. Meetarbhan, the Mauritian ambassador to the United Nations, wants the United States to include Mauritius in the upcoming talks to renew a 50-year treaty between the U.S. and Britain that has allowed the Pentagon to build a military outpost on the island of Diego Garcia.

“If you accept the premise of what they’re arguing, we’d be opening so many cans of worms around the world, there’d be no end to it,” the Africa expert warned. “Diego Garcia, as our recent wars in the Middle East have shown, has been a critical part of the U.S. military infrastructure overseas. We’re not going to turn on an ally such as Great Britain because of the domestic political considerations of a country that doesn’t even maintain an embassy in Washington.”

Mauritius does, in fact, have a Washington embassy on N Street, though the dispute over Diego Garcia is being handled by the country’s U.N. mission in New York.

A prosperous nation of 1.3 million inhabitants, Mauritius is Africa’s highest-ranking country when it comes to good governance and ease of doing business. And its annual per-capita GDP of nearly $10,000 is among the continent’s highest.

“We’ve come a long way since independence, when our economy was nothing except sugar. We’ve diversified and now sugar is less than 10 percent of our GDP,” Meetarbhan said. These days, garment manufacturing, tourism and financial services dominate the economy.

Yet the ambassador says solving the Chagos archipelago dispute is “a matter of principle.”

“We are not talking about money. We think it was wrong and unfair to deport these people. It was wrong to detach part of our territory. Now that this agreement is going to expire, we think it’s an opportune time for the United States in particular to be on the right side of history,” he said, adding that “nobody’s living [on Diego Garcia], but obviously if this is part of Mauritian territory, the prohibitions applied by the U.K. on visiting these islands will be lifted.”

Meetarbhan insists that it is in Washington’s interests to resolve the matter, especially because that would enable it to avoid legal and political controversies at a time when it wants to enlist Africa’s help in the war on terrorism and other sensitive issues. 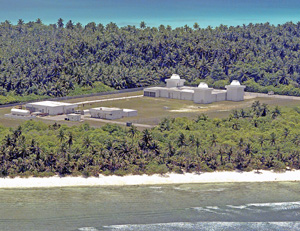 “We want all three parties — the U.S., the U.K. and Mauritius — to start talking about what happens after 2016,” he said. “The U.K. has always said the islands would be returned to Mauritius once they are no longer required for defense purposes. So if these defense purposes can be met by an agreement between Mauritius and the United States, there’s no point to continue this dispute.”

Meetarbhan said that ultimately, “it’s for the United States to decide” the fate of Diego Garcia, whose original inhabitants were offered limited compensation in the 1980s. The ambassador told us he doesn’t expect the Pentagon to give up its most important outpost in the Indian Ocean — just to respect the island’s original inhabitants.

“The Chagossians are asking for the right of return, to visit the graves of their ancestors. The African Union has adopted a unanimous resolution supporting us, and we’ve had a similar resolution adopted by the Non-Aligned Movement,” he said. “At the end of the day, it’s a matter of getting it right and putting an end to the last vestige of colonialism in Africa.”