The recent election in the United Kingdom showed that social media has become the great equalizer for political campaigns, with candidates from all parties posting short campaign videos and pithy explanations of their stances on nationalism, a possible Brexit and immigration. In the United States, Hillary Clinton made her long-awaited presidential bid exclusively via Twitter and YouTube, while other candidates are hiring an army of digital strategists to amplify their voices across various social media platforms.

But those who weather, and ultimately win, their campaigns may find another challenge on their hands once they take office: changing the format of their channel from a one-way broadcasting megaphone into a truly interactive means of engaging the public in 21st-century statecraft. Some leaders have mastered the art of social media conversation, while others have tuned out their listeners.

A new study by Burson-Marsteller looked at the effectiveness of world leaders on Twitter — which the PR firm calls the social media channel of choice for world leaders — measuring not only the number of their followers, but also engagement with peers, influence in the Twitter sphere, tone and how they manage dormant accounts, such as those for now-completed campaigns. The report, “Twiplomacy 2015: How World Leaders Connect on Twitter,” found that more than 4,100 embassies and ambassadors are now active on Twitter, as are the vast majority (86 percent) of the 193 U.N. member states. In addition, 172 heads of state and heads of government have personal accounts on the social network, as well as more than half of the world’s foreign ministers and their institutions.

In all, the study analyzed 669 government accounts in 166 countries and found that together these accounts boast a combined audience of 212 million followers. “In short Twitter has become an indispensable diplomatic networking and communication tool,” the report says.

The most-followed world leader is President Barack Obama, with 59 million followers. His account, @BarackObama, will stay in his possession when he leaves office, unlike first lady Michelle Obama, who currently uses the @FLOTUS handle. (Obama also finally activated an @POTUS account last month, attracting 1.6 million followers in the first 24 hours; it will be passed down to his successor should the next president want an official account rather than a personal one.) 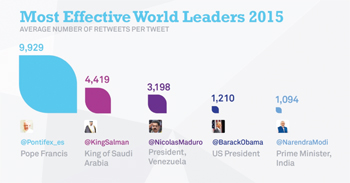 However, despite his massive following, Obama’s Twitter engagement has been on the decline over the past several years. Why? It was set up as a campaign account and still behaves largely as one, full of smiling photos, video clips of news appearances and links to fluff articles about field trips to classrooms. Rarely does the account dive into weightier issues (it ignored the recent Baltimore riots entirely) or discuss foreign relations. The account acts more as a megaphone than a telephone, with one-way communications and the occasional call for engagement via an online petition or survey.

This level of engagement is a sharp contrast to Pope Francis (@Pontifex), whose nine language accounts rack up nearly 20 million followers total. Judging by the number of retweets, however, the pontiff is far more effective than the American president, garnering nearly 10,000 retweets for every tweet he sends on his Spanish account and 7,527 retweets on average on his English account. Obama’s tweets earn a mere 1,210 retweets, on average.

Turkish President Recep Tayyip Erdoğan (@RT_Erdogan) and @WhiteHouse are in fourth and fifth places for the most followed accounts, respectively. Saudi Arabia’s King Salman (@KingSalman) and Venezuelan President Nicolás Maduro (@NicolasMaduro) follow Pope Francis for second and third place in the most effective category, with Obama and Modi coming in fourth and fifth.

While not on any top five lists, Rwandan President Paul Kagame (@PaulKagame) is Africa’s most-followed head of state; the account of British Prime Minister David Cameron (@Number10gov) is the most followed head of state in the European Union; and Mexican President Enrique Peña Nieto (@EPN) takes the title for most followed leader in Latin America.

While millions of followers are impressive, more impressive is who’s among them. Many heads of state and ministers make a concerted effort to connect with their peers, forging a “virtual diplomatic network” of sorts. According to the “Twiplomacy” report, members of this informal network “can and do send each other private direct messages on the platform which are often faster and more effective than traditional diplomatic demarches.” Mutual following is considered a polite nod, at the very least, and in some cases foreign offices have used Twitter’s direct message function to quickly clear up a misunderstanding, or coordinate schedules and campaigns. 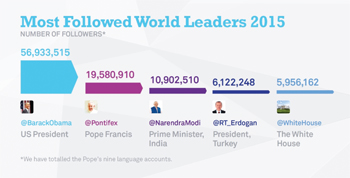 The study also found that such connections are particularly valuable for smaller countries, such as Croatia, whose government is mutually following more than 500 of its peers.

In fact, since Burson-Marsteller’s last study in 2014, foreign ministers and their ministries appear to have made a concerted effort to forge mutual connections on Twitter. French Foreign Minister Laurent Fabius (@LaurentFabius) is the best-connected foreign minister, following 100 peers and world leaders. Interestingly, in second place is the Russian Foreign Ministry, which has made a conscious effort to connect with peers on their English-language account @MFA_Russia.

While both President Obama and the White House accounts are followed by a record number of world leaders, they don’t often return the courtesy; the only three leaders Obama follows are Russian Prime Minister Dmitry Medvedev, Norwegian Prime Minister Erna Solberg and Estonian Foreign Minister Keit Pentus-Rosimannus. Both Solberg (@Erna_Solberg) and Estonian President Toomas Hendrik Ilves (@IlvesToomas) are two of the few heads of state who manage their own accounts. Incidentally, Solberg, who has dyslexia, also admits that she makes the occasional spelling mistake.

“It always amazes me how quickly governments adapt to the ever-changing social media landscape,” said Burson-Marsteller’s Matthias Lüfkens (@luefkens), author of the report, in a press release. “Some governments have become very professional at using Twitter’s six-second Vine videos and others are already going live on Persicope, Twitter’s latest live-streaming application.”

That last tidbit is a great lesson for any political candidate: craft Twitter campaigns and messaging for the long haul, connect with peers early and often, and treat their platforms more as a two-way form of communications, with images, videos and texts, rather than as a one-way broadcasting channel aimed only at promoting a message. Twitter users, be they heads of state, diplomats or ordinary citizens, can either opt to engage in meaningful, purpose-driven conversation, or stand on the precipice and yell into the void. Doing the latter may earn a place on a list, but the former will create a lasting effect.

Molly McCluskey (@MollyEMcCluskey) is contributing writer for The Washington Diplomat.