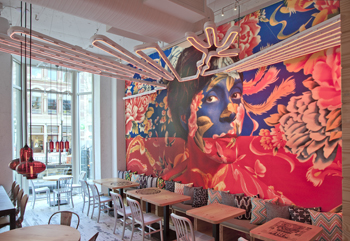 Step into China Chilcano, José Andrés’s trendy new Peruvian-Asian restaurant in Penn Quarter, and it immediately feels like a night on the town — and around the world.

A swirl of vibrant colors, inviting aromas and a buzzy, upbeat vibe envelope you, creating a sensory “wow” factor that is unrivaled in D.C.’s dynamic dining scene. Even better, the cheerful hostess informed us that our reserved table was ready when we arrived — no cooling our heels over expensive drinks at the bar, which seems to be the modus operandi at many upscale eateries these days.

While it’s tempting to describe China Chilcano as a fusion restaurant, prolific restaurateur/celebrity chef Andrés apparently resists that label. There is, in fact, a historical correlation between Asian and Peruvian cuisine.

“In late 19th century, Chinese and Japanese settlers traveled to Peru and made it their home, bringing with them the time-honored cooking traditions that sparked the beginning of the rich multicultural offering that is Peruvian cuisine,” a glance at the dinner menu informed us.

With that bit of history in mind, we scanned the drink menu and asked for recommendations. A cheerful server steered us toward the pisco, a traditional Peruvian libation. One of us took the bait, choosing the signature Chilcano, made from Macchu Pisco, lime, Amargo Chuncho bitters and ginger ale. Refreshing and bracing, the tart concoction was a pleasant prelude to the culinary adventure ahead. 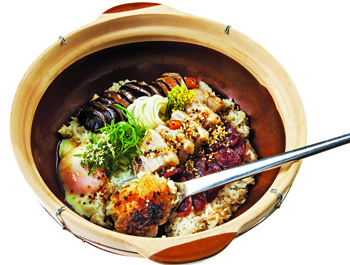 I’m a sucker for Korean kimchi, so we had to have the Nabo Encurtido, a chifa-style pickled daikon that sounded similar (chifa is a Peruvian term that refers to Chinese cooking). The small bowl of thinly sliced, crisp white radish was an excellent starter, with a piquant flavor that awakened the entire palate.

And you can’t go to an exotic restaurant without trying something a little adventurous, right? That’s how we found ourselves ordering a few pieces of barbecued duck tongue. I’ll readily admit to some trepidation. After all, the words “duck tongue” don’t really roll off the human tongue as something delicious-sounding. We were pleasantly surprised.

Not at all “gross,” as my dining companion predicted, the small morsels of tender, charred meat held a flavor of light smoke and spice. And if the tart little cape gooseberries that topped each slice helped mask any gamy taste, who am I to complain?

Causagiris — an invented word combining the Peruvian potato roll dish called causa with Japanese nigiri, or raw fish — presented another interesting international option. We opted for the “California” version — potato causa, jumbo lump crab, tobiko, spicy mayo, cucumber, avocado and huancaina, a spicy Peruvian cream sauce. While we could appreciate the chef’s ambition with this hybrid experiment, the dish’s execution — at least the version of causagiris we ordered — missed the mark. The spicy mayonnaise, while pleasant enough, overwhelmed the overall flavor and texture of the roll. The entire thing also collapsed into a soggy mess, regardless of whether you used chopsticks or a fork.

A decision about main courses at China Chilcano can cause a temporary case of mental paralysis. Do you opt for one of the intriguing Chinese-Peruvian dishes, a more hearty and traditional Peruvian plate or maybe something from the tantalizing selection of fried rice and noodle bowls?

Our choices turned out to be a mixed bag. We picked one entrée from the Chinese-Peruvian fusion list that turned out to be rather ho-hum and another — the traditional Peruvian Ají de Gallina chicken dish — that was so outstanding it pretty much redeemed any other shortcomings encountered elsewhere in the meal.

Let’s start with the disappointment. The Camarón Saltado Maestro Wong — wild gulf shrimp, fermented black bean, wood ear mushroom, spring onion and rice — registered on the palate as akin to upscale but, unfortunately, only slightly better than decent take-out Chinese food. The rather bland concoction was enlivened somewhat by the fresh onion and texturally interesting wood ear mushrooms, but otherwise our reaction was a collective shoulder shrug. 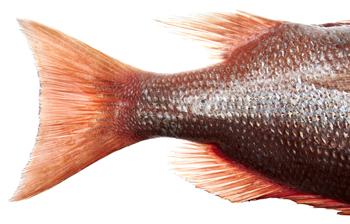 Red snapper is on the Peruvian side of the menu at China Chilcano.

On the other hand, the Ají de Gallina was a gustatory revelation — a showstopper. It’s described on the menu as “Peru’s most precious dish,” and one can easily taste why. The entrée features free-ranch chicken from Lebanon, Pa., and is prepared as a stew flecked with botija olives, fresh cheese, pecans, a small boiled, sliced egg and rice. The steaming hot dish immediately perks up the olfactory senses and boasts an attractive golden hue. Hearty and velvety, with hints of cardamom and citrus, Ají de Gallina would be a perfect way to warm the bones on a chilly winter afternoon. It also tasted pretty fabulous on a warm spring night.

For dessert, we split the Yàn Wō “Birds Nest” Soup, an inventive and novel “soup” concoction featuring pink grapefruit sorbet, mint, sesame and ginger. The effect was tart, almost like a key lime pie, but without the sugary aftertaste. The grapefruit and mint combination actually was an effective and delicious palate cleanser.

China Chilcano, which shares the block with Jaleo, the Spanish tapas restaurant that made Andrés a local dining legend, is a fun and flashy, if somewhat uneven, smorgasbord of three culinary traditions. It captures Andrés’s boundless energy and colorful brashness, though it can be hard at times for diners to keep up. Still, anyone looking for an adventurous restaurant — maybe a place to impress a date or an out-of-town friend — would do well to hop along for the voyage.