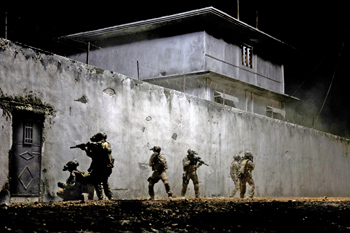 “Zero Dark Thirty,” the vivid depiction of the U.S. intelligence community and military’s 10-year quest in search of al-Qaeda leader Osama bin Laden — mastermind of the 9/11 terrorist attacks — which concluded with the daring raid on his secret hideout in Pakistan, collected a leading three awards by the Washington DC Area Film Critics Association (WAFCA).

“In a year full of strong films, director Kathryn Bigelow’s bold and audacious vision, represented in our Best Picture winner, is the perfect political story for our members in the District of Columbia. This story, told with steely, cold effectiveness, is a worthy entry into WAFCA’s Best Picture canon and a cinematic achievement that we are proud to honor,” proclaimed WAFCA President Tim Gordon.

Bigelow’s second Best Director WAFCA Award comes only three years after she became the first woman to ever win by helming “The Hurt Locker,” her powerful depiction of a U.S. Army Explosive Ordnance Disposal team’s dangers during the Iraq War.

For 2009’s “The Hurt Locker,” Bigelow also scored the distinction of being the first female filmmaker to take home the coveted Best Director Oscar after 82 years. However, that honor has no chance of repeating this year as she was shockingly shut out of the 85th annual Academy Award nominees for Best Director, even though she was considered a leading contender and “Zero Dark Thirty” was nominated for the Best Picture Oscar.

This season, WAFCA instituted the Joe Barber Award for Best Youth Performance in honor of Joe Barber, who died a little over a year ago after an influential career as WTOP’s long-tenured arts editor and a D.C. film critic. American child actress Quvenzhané Wallis, the precocious star of the indie fable “Beasts of the Southern Wild,” who was just 6 years old at the time of filming, earned the inaugural memorial accolade spotlighting the best performance from an actor or actress under 20.

“It’s a shame Joe was not able to see Quvenzhané’s fierce and compassionate performance in this gem of a film. It’s exactly the sort of role Joe would have loved, and we are so thankful to be able to remember him going forward with this very special award,” said Gordon. Now 9 years old, Wallis also became the youngest Best Actress nominee of all time at the Academy Awards.

The three WAFCA prizes given to “Zero Dark Thirty” epitomize a year in which political and historical dramas dominated the association’s awards, which recognized the top-quality movies and talent of 2012 according to a decidedly local perspective. WAFCA’s voting membership consists of nearly 50 film critics — including this writer — covering the Washington, D.C., Maryland and Virginia area who report in print, web, radio and television.

Stephen Chbosky (“The Perks of Being a Wallflower”)

“Rise of the Guardians”

“The Queen of Versailles”

Logan Lerman (“The Perks of Being a Wallflower”)

Quvenzhané Wallis (“Beasts of the So”)