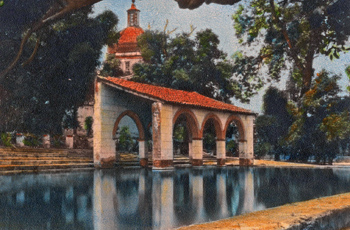 The Mexican Cultural Institute, adjacent to the former Spanish ambassador’s residence that’s now used for cultural purposes, is a quintessential Washington mansion that’s home to a cornucopia of Latin art.

Stepping into the grand Beaux-Arts building is electrifying. Architect Nathan Wyeth, famed for his design of the West Wing, built the mansion more than 100 years ago as a private residence for the family of Franklin MacVeagh, treasury secretary to President William Taft.

Stepping into the building itself is a journey to another country — one that’s enhanced by a display of photographs that capture the scenic landscapes and sociopolitical realities of 20th-century Mexico.

“The photo exhibits add to a longstanding tradition of artists visiting Mexico, which offers a lot of fertile soil to show off their talents,” said Alejandra de la Paz, executive director of the institute.

“The idea of the exhibit is to take the eye of the traveler from 1933 to 2001,” said Nathan Keegan, cultural programs and media officer for the institute.

The journey begins with “Fourteen Travelers in Mexico,” whose images vary from stark to otherworldly, though all offer an unexpected, almost poetic reflection on aspects of Mexican life — both the mundane and spectacular. 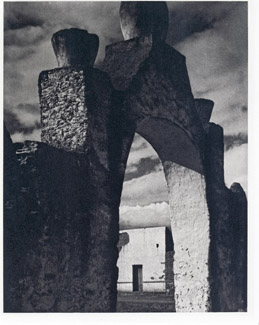 “His pictures are exotic, culturally rich and of another land, with striking architecture that seems so different from ours. They show how wonderfully different this Mexico is from our United States,” said Keegan.

Somber portraits of young and old, man and woman, create a pictograph of the people and sights Strand encountered: “Girl and Child, Toluca,” standing beside a stone wall; “Boy, Uruapan,” about 6 years old, sombrero in one hand and chin in the other; “Gateway, Hidalgo,” a contrast between shadow and sunlight on an arched stone entranceway.

And in the 1970s, “we transition to modernity,” said Keegan. “These images are so quotidian you can’t readily separate them from their counterparts in the U.S. but for a few differences.”

Though still indelibly Mexican, the photographs don’t romanticize the landscapes or people, letting them speak for themselves.

A 1981 print “Leyendo a Rulfo” by Mario Algaze depicts the solitary figure of a man sitting on the front steps of a building, but the focal point is really the structure — its column-lined entrance, wrought-iron balcony and tiled floor. “The architecture is unfamiliar to American eyes and gives the shot a defining Mexican quality,” said Keegan.

“Visions of Mexico” also speaks to the country’s distinct charm. German-born Hugo Brehme was an outsider when he immigrated to Mexico in the early 20th century, but he grew to love the country, became a citizen, and ran a thriving postcard business there.

But his postcards weren’t the cheap souvenir variety. They captured heartfelt images of nature and indigenous life in photographs that were hand-colored with oil paints to give them a timeless, vintage feel. 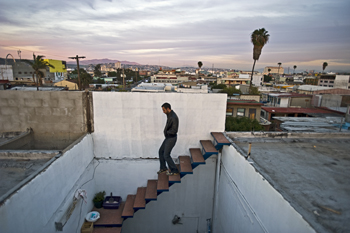 Like the American photographers in “Luces y Sombras,” Brehme sought to elevate both the medium itself — photography as fine art — and the stunning natural beauty and heritage of Mexico.

“His color palette offers a fine hue and is interesting in its own vibrant way,” said Keegan. “The colors aren’t true or faithful but are the way he remembered them.”

“Paricutín, Michoacán, Mexico, 1920s” shows a volcano billowing smoke into a calendar-blue sky, contrasting sharply with the scene below, as a village casually goes about its business, thatched huts lining a dirt road traversed by a few lone figures and a lean white horse.

In “Guadalupe, Mexico, 1920s,” Mexicans climb a wide sandstone staircase beside a wall bathed in golden sunlight. The rays of light also glint off the men’s white pants and long pink skirts on the women, a visual interplay of people and place both basking in the sun.

“Cuernavaca, Jardin Borda, 1915-25” veers toward the fantastical, as a stone structure with six arches joined overhead by a red-tiled roof is perfectly mirrored in the still blue waters of an adjacent river. It’s postcard as art.

“The Brehme exhibit complements ‘Luces y Sombras’ because it also has that traveler’s vision,” said Keegan, “but here the traveler stays in Mexico, unlike the other photographers who came and went.”

Said de la Paz: “These photographs enrich our perceptions of Mexico. They are a great example of the power of culture and show how art and artistic community don’t have borders. Culture builds bridges.”

Visions of Mexico: The Photography of Hugo Brehme

Audrey Hoffer is a freelance writer in Washington, D.C.