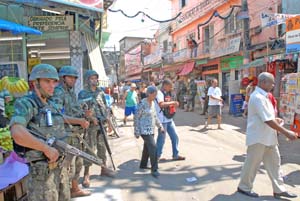 With the 2014 FIFA World Cup only weeks away, police and military officials throughout Brazil are rushing to make sure all security measures are in place by the time the month-long soccer competition kicks off June 12.

Brazilian troops patrol a favela in Rio de Janeiro in 2008. More recently, the government has established Police Pacification Units (UPPs) to maintain order in the favelas.

In early April, about 2,000 soldiers raided the Rio de Janeiro shantytown of Mare using helicopters and armored personnel carriers. The favela — considered one of Rio’s most dangerous — is controlled by two rival drug gangs and is home to about 130,000 people.

Authorities have created dozens of Police Pacification Units (UPP in Portuguese) since 2008 as part of a bid to quell violence in the sprawling favelas that cling to Brazil’s urban hillsides ahead of the World Cup.

Eduarda La Rocque, head of Rio’s municipal planning agency, said the UPPs will help keep the city safe for both residents and the tens of thousands of tourists who will flock to Brazil for the international soccer extravaganza.

“In order to ensure security during the World Cup, we have entered into many alliances,” said La Rocque, speaking at a recent conference at Washington’s Wilson Center.

La Rocque said municipal officials have invested $7.8 billion in transportation projects and enhancement of existing infrastructure with an eye toward not only the upcoming World Cup but also the 2016 Summer Olympic Games, to be hosted by Rio de Janeiro.

It also helps, she said, that Rio de Janeiro’s debt has been upgraded three times by all the major international ratings agencies even though Brazil’s debt as a whole was recently downgraded.

“The World Cup is right around the corner, but our focus is sustaining a permanent legacy for the citizens,” she said.

Rio de Janeiro has 6.32 million inhabitants, of whom nearly 1.39 million — or 22 percent of the population — live in favelas. “From 1991 to 2010, the city’s population grew 0.4 percent a year, but the favelas grew by 2.4 percent,” La Rocque pointed out. “We need social policies that are specifically geared to favelas that will reduce crime and promote social development.”

But critics of the military campaign say violence has spiked in favelas that authorities claim have already been pacified, raising concerns that crime could be a problem during the games. They also say the mega sporting events are being used as an excuse to “socially cleanse” poorer neighborhoods, forcibly relocating thousands of slum dwellers to make way for new roads, stadiums and a larger gentrification push to modernize the country.

But La Rocque insisted the effort will have long-term benefits for all residents. “We don’t just want to inaugurate things. I’m certain that by 2020, when we look back at the data, we’ll find that living conditions are substantially better. We must continue to attack inequality and stimulate investment. We already have the information. We know what needs to be done.”

Col. Robson Rodrigues, a senior consultant at Rio de Janeiro’s Igarapé Institute, is a former police commander who helped to structure and deploy UPPs throughout the state. Rodrigues said the success of the UPPs has as much to do with a change in the general mindset of police authorities as with strategies in the favelas. 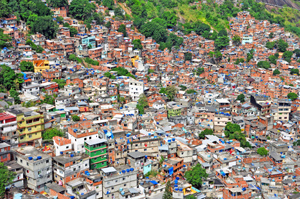 “Our police officers used to be repressive, enforcing rules the hard way. We never really utilized softer, more refined ways such as intelligence gathering, public relations or community development,” he said, noting that police effectiveness should not only be measured by statistics but thought of in cultural terms.

“We have made considerable strides. All the stakeholders in the community — not only police officers but also community leaders — have learned a great deal,” said Rodrigues, noting that some 200 areas throughout Rio are now occupied by UPP troops. “It is up to law enforcement agencies to show that they understand the needs of society, and this has to be reflected in their behavior.”

This will especially be true during the World Cup, he said.

“We are going to see a large number of boots on the ground. As a result, we will be able to avert most kinds of insecurity and criminal action,” said the former cop. “It’s possible we will see some turbulence. However, it is essential that we continue with this pacification process.”

Brazilian economist and social scientist Mauricio Moura, a visiting scholar at the George Washington University, agrees. “For the first time, we’re openly discussing something that’s been done, and not something that should be done,” he said. “This is ultimately the greatest legacy of the project. If you walk through a community that’s been pacified, you clearly feel more secure. But we need to see if this is a lasting benefit or a passing fad. As to whether the program will ultimately blossom into a long-term project, we’re unable to answer that at this time.”