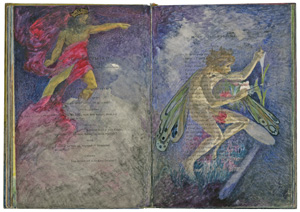 This past April marked Shakespeare’s 450th birthday, so the Folger Shakespeare Library, the fountain of all we know about the Bard in Washington, D.C., put on a simple but eclectic exhibition aptly titled “Shakespeare’s the Thing,” highlighting “some of our favorite things” from the library’s collections.

Through artifacts, programs, playbills, books, folios and forgeries, the exhibition attempts to show how the iconic English playwright touched the full cultural spectrum and why, after four centuries, Shakespeare still holds his own today.

“Shakespeare’s the Thing” highlights items from the Folger collection that show the Bard’s enduring influence, such as Pinckney Marcius-Simons’s 1908 watercolor illustrations for “A Midsummer Night Dream.”

Even though the debate about who actually wrote some of Shakespeare’s works still pops up periodically like a bad penny, this is not an exhibition that delves into any controversial aspect of his life or legacy. This is an exhibition about why we continue to love this writer so much. In other words, like the ghost of Hamlet’s father, why does he haunt us still?

Even if you’ve only seen one or two Shakespeare plays, looking at the content in this display invariably makes you think about your own experiences with the Bard.

My first encounter was “Hamlet,” as a Classics Illustrated comic book, a series of comics that surfaced in the 1940s to entice youngsters into reading classics works of literature, from “Faust” to “Moby Dick.” “Hamlet,” along with “Macbeth,” “Romeo and Juliet,” “A Midsummer Night’s Dream” and the like, were all translated as action-packed, brightly illustrated comic adaptions. Hamlet’s soliloquy occupied a whole page, with the words stuffed into a huge balloon above a tiny drawing of the Prince of Denmark. I went straight to the sword fights.

Still, Classics Illustrated is a part of the contemporary lore of Shakespeare, one of the many ways (arguably an old-fashioned way compared to the Internet era) that folks learned about Shakespeare. That learning process is a journey mimicked among the items in “Shakespeare’s The Thing,” from a 1623 Shakespeare First Folio and a modern digital app to a board game and a Sanskrit translation of a comic-free “Hamlet.”

“My idea was that it ought to be fun,” said curator Georgianna Ziegler. “It’s like opening up the Folger vault — all of the weird, funny, wonderful stuff as to how people related to Shakespeare. You can open it like opening a birthday present. What’s inside?” 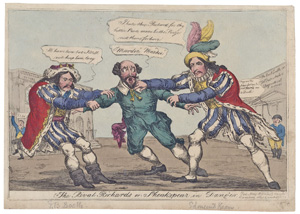 If you’re a stickler for the nitty-gritty details with which the Folger Library is so adept, you might want to examine the famed 1623 First Folio containing 36 plays and the ever-changing portrait of Shakespeare from the early editions that appeared through 1685. Or you could take a closer look at the Bard’s first forger, William Henry Ireland, who faked a love letter to Shakespeare’s wife Anne Hathaway in the guise of her husband.

Perhaps a declaration of love, even if it was ultimately from another man, needed to exist considering the speculation over whether Shakespeare really loved Hathaway or was forced to marry her because she was pregnant at the time. Though they wed when he was 18 and remained together for the rest of his life, in his will, Shakespeare left his “second-best bed with the furniture” to his wife, leaving the rest to his children. This bequest has often been interpreted as a slight, implying that Hathaway was in some sense only the “second-best” person in his life, though no evidence has surfaced to support that contention.

The Folger examines the impact Shakespeare had on various other figures long after his death, such as David Garrick, the great 18th-century actor, producer and agent of theatrical change. At the end of the 1769 Shakespeare Jubilee, he pointed to a bust of the Bard and shouted, “Tis he! Tis he! The god of our idolatry!”

That idolatry and worship continued throughout the centuries, influencing artists such as Salvador Dali and actor-director Kenneth Branagh 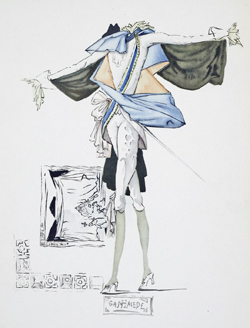 While Shakespeare has been a constant presence on the screen (thanks in no small part to Branagh), the sweetest and saddest thing about Shakespeare is that probably the best way to “get” him completely is to see his work played out on the stage. These performances, while fleeting and rarely recorded for posterity, remain with us as memories for as long as we live. We remember the beautiful words (the rest is never silence) and we think of all the characters who remain vividly real in our imaginations — the queens, the kings, the ass, our garrulous uncommon common man Falstaff.

And, of course, we remember the main man, that master wordsmith, the irrepressible “thing” who brought them all to life, cementing his own immortality in the process.