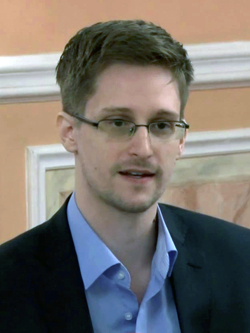 Since Edward Snowden blew the lid off a number of sensitive and controversial NSA intelligence-gathering programs exactly one year ago, the world has been consumed by the debate over the appropriate boundaries of spying in the digital age. Revelation after revelation shocked and angered American citizens and foreigners alike. At certain points the scandal sent diplomatic relations into a tailspin, with German Chancellor Angela Merkel demanding a personal explanation from President Obama for allegedly tapping her cellphone and Brazilian President Dilma Rousseff canceling a state visit to Washington.

She wasn’t the only one putting the kibosh on diplomatic meetings. In protest of Russian President Vladimir Putin’s decision to offer Snowden temporary asylum, Obama canceled a high-profile trip to Moscow. And a plane carrying Bolivian President Evo Morales was forced to stop in Vienna amid concerns that Snowden was being smuggled out of Russia. These are just the highlights, of course.

The outrage over American spying activities reverberated around the world as an almost continuous flow of new disclosures hit the newsstands. Where to direct the anger grew more complicated when it came to light that some of the countries most upset by American eavesdropping behaved similarly (France) or operated in cahoots with the National Security Agency (Britain).

After a while, it became difficult to keep up with the media frenzy over government spying and just as hard to make sense of it all. But now that the shock and indignation have begun to subside, and the courts and legislative branches are working to modify laws and programs to restrain mass surveillance, it’s worth pausing to take stock of what it all means.

For those monitoring the situation closely, the takeaway one year out is less about specific changes to intelligence gathering than the long-overdue conversation it has started.

“There is now a historic global debate about whether surveillance technologies have outpaced democratic controls,” said Ben Wizner, a lawyer for the ACLU who also represents Snowden. “This is a debate that we should have had before this architecture was deployed, but it’s good that we are having it now.”

In other words, Snowden drew attention to the fact that modern technology has enabled governments to undertake the type of dragnet surveillance that used to be the stuff of Hollywood lore. For the most part, lay people have been stunned to learn what kind of snooping is possible and in fact happening.

Snowden, a 30-year-old NSA contractor with Booz Allen Hamilton, disclosed thousands of classified documents in one of the biggest security leaks in modern U.S. history.

The spying scandal began in earnest when The Guardian newspaper revealed in June 2013 that the NSA was collecting the telephone records of millions of Verizon’s American customers. The agency was not privy to the contents of the conversations themselves, but rather what’s known as metadata: the location of the call, time, duration and other unique identifiers. That same week, The Washington Post ran a story about an NSA program popularly known as PRISM, which collects data such as emails, photos and video chats from the servers of major tech companies, including Google, Facebook, Apple and Yahoo. The tech executives lashed out at the government claiming it was happening without their knowledge, a fact that the NSA disputes. 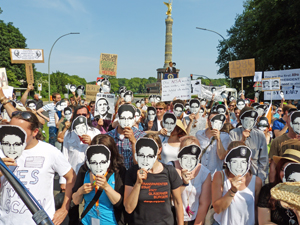 More bombshells followed with articles alleging that the NSA and even the FBI routinely spied on local embassies in Washington (though spying on embassies, where agents often pose as diplomats, is a time-honored tradition around the world), and that the United States and Britain kept tabs on foreign leaders and diplomats at the 2009 G20 summit. Within the month Snowden made himself known as the source of the leaks, proclaiming himself to be a whistleblower for government surveillance powers that had gotten out of hand.

Many more disclosures ensued — a few of the most contentious ones include reports that the NSA wages a multipronged campaign to break or skirt encrypted content on the web and runs a program known as XKeyscore that collects virtually all Internet user activity.

The resulting furor breaks down along separate lines domestically and internationally. While NSA programs ostensibly target foreigners, the indiscriminate bulk collection of data regularly ensnares millions of U.S. citizens. The lack of legal oversight — the Foreign Intelligence Surveillance Act (FISA) Court has been described as little more than a rubberstamp — has also sparked a domestic uproar. Overseas, nations have begun to chafe at America’s dominance over the Internet and its expansive infrastructure that has made the NSA’s sweeping dragnets possible.

But whether at home or abroad, at the heart of the controversy is the tension between meeting national security needs and maintaining the right to privacy. The brouhaha made clear that finding a balance between the two in a digital age is a daunting task.

“Now that people are aware of these practices, there is a much better chance, going forward, that there will be more effective checks and balances both internally and externally imposed,” said Edward Black, president and CEO of the Computer & Communications Industry Association.

Just how much intelligence-gathering practices will change or stay the course depends on a number of legal proceedings and efforts to pass new laws that will play out over the next couple of years (most notably with regards to the Patriot Act, which expires June 2015). But there have been some definitive changes already.

The most important of these is President Obama’s directive to significantly narrow the scope of the NSA program that collects domestic phone records. Under proposed reforms now being debated by Congress, private phone companies, not the NSA, would be responsible for holding the bulk American phone records while the NSA would need court permission to access records up to two degrees, or “hops,” away from its inquiry target. Obama actually axed the metadata phone program as it existed but called for the agency to find a way to duplicate its capabilities in a more targeted manner.

And in what appeared to be a nod to Merkel and other offended foreign dignitaries, Obama also made clear that top government officials from allies of the United States are almost always off limits.

But reform advocates say the proposals — especially those making their way through the Hill, where key privacy safeguards have been watered down to achieve compromise — are riddled with loopholes that the NSA will exploit.

Intelligence officials such as former NSA and CIA chief Michael Hayden, however, argue just the opposite — that restrictions could put the United States at a serious disadvantage against other countries that regularly spy on us, both for security and economic reasons. They point out that even among friendly nations the United States doesn’t always see eye to eye on a broad range of issues. Allies such as Germany have also undoubtedly benefited from the security-related intelligence Washington has shared with them.

In the eyes of the NSA, what happens next is less about the need to make substantive changes than helping Americans understand the nature of their work.

Security versus privacy is the wrong way to look at it, Richard Ledgett, deputy director of the NSA, argued in a TED talk this past spring. It’s “about the balance between transparency and secrecy” and “I think that people have legitimate concerns” about that.

Ledgett conceded that the NSA had done a poor job of explaining itself.

“We need to be transparent about our authorities, our processes, our oversight [and] who we are,” Ledgett said. “We, NSA, have not done a good job of that, and I think that’s part of the reason that this has been so … sensational in the media.”

But Ledgett argued against revealing the tools that help the NSA catch “the generally recognized bad guys” lest they become ineffective.

Yet the NSA has never publically demonstrated that its spying has actually been effective in thwarting a major attack (and, in the catch-22 world of classified information, it may never be able to do so). That’s in part why privacy hawks call for much more stringent protections to guard against unnecessary intrusion.

EFF along with hundreds of NGOs around the world have issued a doctrine of principles to provide states and legislative bodies “with a guiding framework of how to apply their existing international human rights obligations in the context of communication surveillance,” Rodriguez said.

“It would be great to see a country lead by example and adopt these legal safeguards onto national surveillance law,” Rodriguez added.

While American spying may have been at the center of the Snowden saga, the consensus is that mass surveillance is a universal issue, which must be addressed on the international stage.

This is “a world in which all movements can be tracked and collected,” Wizner said. “I think that’s the debate that needs to be taking place at a global level.”

Eliza Krigman (@ekspectacular) is a contributing writer for The Washington Diplomat.