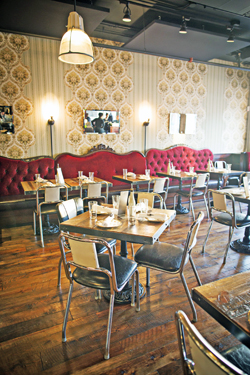 Jeff Black, cofounder and chief of Black Restaurant Group (roles he shares with his wife Barbara Black), has a genius for knowing his audience. One after another, he has opened (and reopened in some cases) restaurants carefully tailored to the local population of each new neighborhood. His newest location, Republic in downtown Takoma Park, Md., is no exception.

The restaurant is designed with the city’s nonconformist eccentricities in mind, from the name Republic — an allusion (perhaps tongue-in-cheek, perhaps sincere)  to the little village’s fierce independent streak — to the funky décor, to the menu that offers sustainably sourced fish, local produce and a bigger selection of vegetarian and vegan dishes than his other locations. Black’s uncanny ability to capture just the right tone to reflect and reinforce the character of his location has produced a place that is as interesting and appealing as Takoma Park itself.

The recently opened Republic offers sustainably sourced fish and local produce such as the wood-grilled sardines and ancient grains with a hint of the Mediterranean.

The opening of Republic last December came on the heels of the closing of Black’s first, and much beloved restaurant, Addie’s in Rockville, Md. Republic is in some ways is more of an heir to Black’s original concept than his other restaurants, such as Black’s Bar and Kitchen and Pearl Dive Oyster Palace.

Eighteen years ago, in a charming little yellow house set back off Rockville Pike in an area where there were very few if any good restaurants at the time, Black began to grow his distinct brand at Addie’s, bringing in aspiring young chefs and training them in their culinary approach. That cooking style defies easy characterization. It was at the vanguard of the slow-food movement, emphasizing sustainably sourced ingredients, and borrows techniques and ingredients from across the traditional spectrum to produce dishes that are creative, sometimes complex and sometimes simple, but always fresh.

To develop Republic, Black invited Danny Wells, a longtime Black Restaurant Group employee, to take an equity stake in the restaurant. A Takoma Park native who got his start in the business at the age of 13 busing tables in a local restaurant, Wells thoroughly understands his community and is developing an experience that the area has been missing for a while.

After looking at a number of locations in Takoma Park, the partners settled on the old Video America building at the corner of Carroll and Laurel Avenues and set about transforming the space with a hodgepodge of design elements that mirror the village’s eclectic nature. Victorian-era red velvet sofas are pieced together to form the seating banquette while period wallpaper covers one wall. Fixtures made of jet engine parts and decorated with beads from the store around the corner light the long zinc-topped bar, while mug shots of Johnny Cash stare down from the restroom walls as his music plays in the background. Altogether, it’s a fascinating space with enough interesting details to occupy your attention as you wait  (unusually not too long) for your food to arrive, snacking on the excellent white bean paste — in lieu of butter or olive oil — and fresh breads that keep coming as long as you ask. 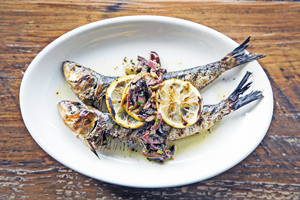 Republic’s menu is as varied as its surroundings and changes regularly based on availability, but it bears the unmistakable stamp of a Black restaurant (including the mussels from Addie’s). Though not large, the menu is well balanced with good fish, meat and veggie choices. On a recent visit, the braised lamb-and-spinach empanada starters — little packets enlivened with Salva Cremasco cheese and served with horseradish aioli — were a hit, particularly with the younger guests.

And since this is a Black’s restaurant, you can expect great things from the seafood. A small plate of wood-grilled sardines or oysters is sure to whet your appetite for one of the main seafood entrées. The featured fish changes daily (on a recent night it was an excellent skate wing), or you can choose from one of the menu items. The Albacore tuna, crusted in fennel and served over garbanzo beans with a charred onion chimichurri is a bold dish, but it is the Atlantic flounder that is a total showstopper. Pan-seared and served with for cauliflower puree, Maitake mushrooms, crushed hazelnuts and vincotto, it is hard to imagine a more prefect combination of tastes and textures.

Chef Wells also offers a burger on the dinner menu that rivals any in D.C. Two patties of Smith Meadows Farm beef are topped with mustard-ale cheese and aioli and sandwiched between a thick, fragrant pretzel bun. Add in some house-smoked bacon and a side of the excellent skinny fries and you have a divine burger. 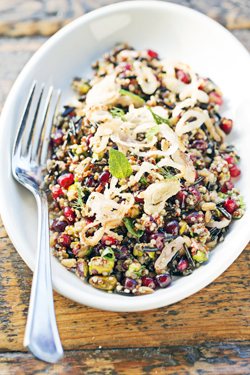 Given the somewhat bohemian location, it is not surprising Republic sports a number of good vegetarian and some vegan options. These are not just afterthoughts thrown in to appease diners. They are inventive dishes developed with the same careful hand as all the others. A recent menu item, for instance, featured asparagus with pea tendrils, pine nuts, hard-cooked egg and red onion crema.

The generous side dishes also provide a meatless alternative. Ancient grains with a hint of the Mediterranean are prepared with pomegranate, pickled shallots, pistachios and mint, while the curried cauliflower with saffron, Marcona almonds and basil is an amalgamation of flavors from across cuisines. Another winner is the kale and garbanzo beans sautéed with oregano and a Virginia prosciutto that can be left out with only a little diminution of the excellent flavor. Some people claim to be growing tired of Brussels sprouts, which in recent years have jumped in popularity, but chef Wells’s version — deep fried with parmesan, lemon zest and smoked paprika — might make you rethink this humble vegetable. Salty and greasy, these Brussels sprouts put even the best potato chips to shame. There is also a vegan main course option that changes nightly, as well as a red and white quinoa risotto, a unusual concoction of quinoa, cremini mushrooms, English peas, mascarpone and a carrot-saffron puree. Rich but subtle, it has more texture than a traditional risotto.

Like the rest of the menu, desserts change frequently at Republic, but if the chocolate hazelnut truffle cake is on the menu, it’s a must for chocolate lovers. Calling it a cake is somewhat misleading because it really consists of two dense-as-candy bars highlighted by salted caramel sauce, hazelnut brittle and whipped cream. The menu usually offers a fruit alternative, including a homey apple pie and a lemon tart with strawberry sauce. One can only imagine what the coming strawberry season will bring. 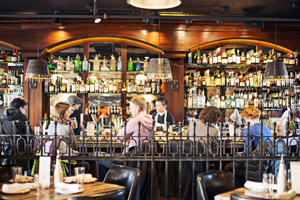 Republic’s bar manager Brett Robison has developed a cocktail menu that features an interesting array of local beers on tap and potent cocktails such as the Fascist Killer.

The bar side at Republic is smallish but comfortable. Bar manager Brett Robison has developed a cocktail menu that matches the menu well and also features an interesting array of local beers on tap (she started out working in a local brewery and has an excellent grasp of the local marketplace). Potent cocktails such as the Fascist Killer feature names that give a shout-out to Takoma Park’s left-leaning politics and history.

As Addie’s did, Republic emphasizes the casual over the formal. And while the caliber of the food is on par with all of Black’s restaurants, the vibe is more relaxed and comfortable. Black is also trying something a little different at Republic by offering live music several nights a week. With weekly blues and open-mic nights, Republic is quickly developing into more than just a good local eatery. Its later evening hours and late-night menus make it an attractive destination almost any time.

People in Takoma Park and beyond have figured this out, and Republic almost always has a good crowd (and with that crowd comes noise, perhaps the only downside of Republic). Because the restaurant does not take reservations, it is wise to plan a visit accordingly and be prepared to wait for a table at peak hours. Now that the weather has finally improved, however, the wait offers a nice chance to stroll around Takoma Park and get an idea of what inspired Black to create the newest, and perhaps most appealing restaurant in his local culinary empire.