Home The Washington Diplomat June 2014 Canadian Embassy Marks 25 Years Of Being at Center of U.S. Relations 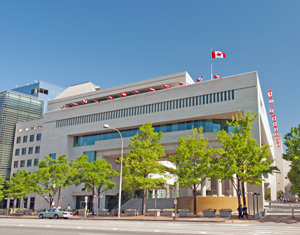 Centrally located on Pennsylvania Avenue, between the White House and the Capitol, and only a stone’s throw away from the National Gallery of Art and Newseum, the Embassy of Canada in D.C. has seen its fair share of serious business and glitzy fun. The grand property that once contained a Ford dealership and public library now houses the diplomatic mission of America’s crucial northern ally. The embassy, so far the only foreign mission to be so close to the U.S. Capitol powerhouse, is gearing up to celebrate the 25th anniversary of its building this summer.

The Canadian Embassy, which celebrates its 25th anniversary this summer, enjoys a prime perch on Pennsylvania Avenue overlooking the U.S. Capitol.

“There is an urban myth that Canada was given our prime location at 501 Pennsylvania Avenue for our help in the rescue of six U.S. diplomats from Tehran, Iran, during the 1979 hostage crisis,” said Christine Constantin, the embassy’s spokeswoman. “As you can see from the dates, this was not in fact the case.”

So how did the Canadians get their hands on such coveted real estate? To recognize the increasingly close relationship between Canada and the United States, it was decided in 1972 that embassy staff had outgrown the chancery they’d been working in until that point. After some discussion, the Pennsylvania Avenue locale was purchased for $5 million, the old Embassy Row location was packed up, and the mission’s doors opened in 1989. It was a mutually beneficial deal because at the time the city was trying to revitalize the Pennsylvania Avenue corridor.

The architect for the new building was award-winning Canadian Arthur Erickson, who chose to blend in specific elements — such as open spaces, greenery and water — that he felt would reflect Canada. The Vancouver-born urban planner is known as a modernist for his distinct use of sharp, crisp contemporary lines and angles, all of which are prominent in the embassy.

Following the embassy’s opening, the New York Times described its architecture as “an odd mix of the grandiose and the graceful, the pompous and the inviting, the awkward and the appropriate.” In the center of a waterfall representing Niagara Falls — a key feature of the U.S.-Canada border — is a rotunda that includes 12 pillars to represent Canada’s 10 provinces and two territories that existed during the time of construction. (Belt out a song in the cavernous rotunda and you’ll hear a distinct, booming echo.). 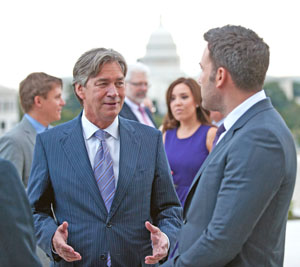 While the infamous “Canadian Caper” rescue mission in Iran may not have earned the embassy its location, this detail did not stop it from hosting a bash to toast the release of the 2012 Ben Affleck-directed film “Argo,” a dramatized account of the covert operation. Hosted by Canadian Ambassador Gary Doer, the rooftop reception, with its prime perch overlooking the Capitol dome, was attended by Hollywood stars and Washington politicos, including Affleck, Bryan Cranston and John Goodman from the film; Ken Taylor, who was Canada’s ambassador to Iran during the hostage crisis; CIA agent Tony Mendez; former CIA Director Gen. David Petraeus (only a month before he was forced to resign following his sex scandal); and some of the escaped hostages themselves.

“Canada and the United States have always had each other’s backs,” Doer told the high-powered gathering. “That’s an important message that’s as important today.”

And while Washington’s relations with Ottawa rarely generate the kind of headlines that its ties with prickly allies like, say, Brazil or Saudi Arabia do, plenty of policymaking goes on between the two neighbors, including the hot-button issue of the proposed Keystone pipeline, which Doer himself has spent the last few years pushing for. 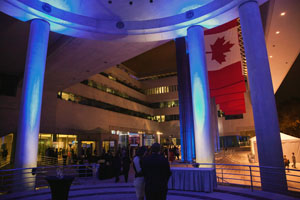 The embassy is lit up for a star-studded reception celebrating this year’s White House Correspondents’ Association dinner.

But it’s not all politics and business. The embassy has set the stage for an array of events, from inauguration viewing parties to star-studded affairs. Most recently, on May 2, the embassy hosted an exclusive pre-White House Correspondents’ Association Dinner party organized in conjunction with the Hill newspaper and Entertainment Tonight that attracted over 830 movers and shakers from the media, business and Hollywood. The guests — including actresses Katharine McPhee and Brooklyn Decker as well as Dos Equis beer’s “Most Interesting Man in the World” Jonathan Goldsmith — mingled in three different locations on the embassy grounds: the Echo Chamber Bar, located outside around the rotunda; the Canada Room; and the Ambassador’s Terrace, which many would argue offers the best view of Capitol Hill in town. The embassy even has a Twitter hashtag purely dedicated to its rooftop: #viewfrom501.

The event would not have been complete without Canadian-born, D.C.-based celebrity chef Spike Mendelsohn serving up specialty cocktails and DJ Connor Cruise (Tom Cruise’s son) providing live entertainment. Watch out U Street — the Canadian Embassy may just be the city’s newest hipster destination. Because the embassy is not allowed to charge a fee to prospective users of the space, renting the venue is a steal (an honor that usually goes to charitable or other groups that have some connection to Canada or diplomacy). Hosts pay for food, drinks, entertainment and whatever else they wish to have at their festivities and then the fun begins. 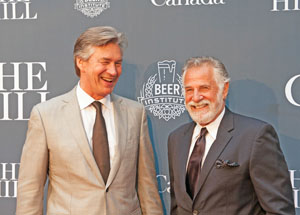 Ambassador of Canada Gary Doer, left, and Dos Equis beer’s “The Most Interesting Man in the World” Jonathan Goldsmith attend a pre-White House Correspondents’ Association Dinner party at the Canadian Embassy organized in conjunction with the Hill newspaper and Entertainment Tonight.

To commemorate some of those memories, the embassy is putting together a book featuring past Canadian ambassadors to the U.S. reflecting on their time in the D.C. embassy. Former Ambassador Derek Burney was the envoy when the mission opened 25 years ago.

“If an embassy reflects the spirit and will of the country it represents,” he said during that opening, “I think you will agree that this building reflects the strength and confidence of Canada today.”