Home The Washington Diplomat January 2010 Bread for the World 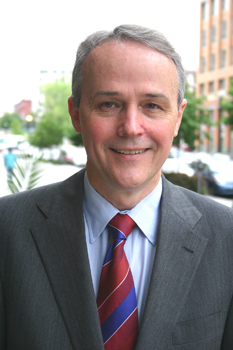 David Beckmann, president of Bread for the World, believes that easing the suffering of the poor and the hungry both across the world and here at home is a moral imperative regardless of one’s religious beliefs.

A Lutheran minister and an economist, Beckmann describes fighting hunger as sacred and hopeful work.

PHOTO: BREAD FOR THE WORLD

“Whatever people think of God or spirituality, everyone knows that when a struggling mother is able to feed her baby, that is really important. If anything is important in this world, helping a mother feed her baby is good. If you believe in God, you believe that God is with that mother,” he told The Washington Diplomat.

Beckmann pointed out that more than a billion people go hungry every day in the world — an increase of 100 million from a year ago, largely due to the global recession, which continues to impact much of the world despite news of economic recovery.

“About a billion people in the world are undernourished. This means they don’t get 2,100 calories a day. Forget about fruits and vegetables, they don’t get two bowls of rice a day. In those families, children die in large numbers,” Beckmann said.

In fact, one in every six people worldwide suffers from hunger and malnutrition, while 17,000 children die of starvation every day. That’s one child every five seconds. Compounding the problem of food insecurity are issues such as population growth — 9 billion more people are expected to live on this planet by 2050 — environmental degradation, resource scarcity and climate change (for example, by 2020, farmers in some African countries could see their crop yields reduced by as much as 50 percent, according to Bread for the World). Moreover, many of the fundamental economic inequities that led to skyrocketing food prices in 2008 haven’t been addressed, meaning that another round of price hikes and crop shortages looms on the horizon, threatening to destabilize governments and kill millions more.

Although many headlines tend to focus on the worldwide food situation, no country is immune to hunger — including the United States, where Beckmann points out that almost 50 million people struggle to put food on their table every day. He added that one in seven Americans live in a home that sometimes runs out of food, including 22 percent of American children.

“Even the kind of moderate under-nutrition we tolerate on a massive scale in America does tremendous long-term damage. It is why in this recession, we cannot afford to let 22 percent of our kids go hungry. Whatever else we do in this recession, we’ve got to scale up nutrition assistance to poor children, especially young children,” he argues.

Soft-spoken and passionate, Beckmann is one of the leading advocates in the United States for hungry people. A native of Lincoln, Nebraska, he has an undergraduate degree from Yale University and graduate degrees from Christ Seminary and the London School of Economics.

“When I was ordained [a clergyman], I was called to be a missionary economist. I think I’m the only one in captivity,” he quipped. “My church called me to help connect Christian faith and moral teachings to economic issues, especially poverty.”

To that end, Beckmann has been president of Bread For the World since 1991, overseeing a determined campaign to strengthen America’s commitment to tackling hunger and poverty. Before that, he worked at the World Bank for 15 years, specializing in low-income housing and developing outreach strategies to civil society on a host of poverty-related issues. He has also written several books, including “Transforming the Politics of Hunger” and “Grace at the Table: Ending Hunger in God’s World.”

Created in 1974, Bread for the World is a Christian organization that lobbies U.S. policymakers to create programs to end hunger and poverty in the United States and across the world. Based in a suite of offices near the U.S. Capitol, the group has more than 60,000 members and relationships with more than 4,000 churches. It’s one of the largest organizations in the world dedicated to building the political will to end hunger, and it does more advocacy on poverty-related issues than any other organization in the nation.

“What we do now is help the U.S. government be a more effective instrument in reducing poverty. We’re an advocate within the U.S. political system, trying to get the American political system to be responsive ‘to the least of thee,’” Beckmann explained.

“Bread for the World is the best organization that the U.S. religious community has created to help make the connections among faith, poverty and politics,” he added. “Our distinctive strength is our extraordinarily large, committed and sophisticated grassroots network. We have activist leaders in every congressional district in the country. We mobilize hundreds of thousands of thoughtful constituent contacts with Congress every year.”

Bread for the World’s staff includes liaisons to Congress, policy analysts, communications experts, grassroots organizers, administrators and fundraisers, all of whom try to craft and push effective policies that attract bipartisan support.

“We try to pick issues where Republicans and Democrats can work together. We try to pick ethical no-brainers. We don’t want issues that divide people,” Beckmann said. “We have a good combination— a strong lobbying operation, a strong grassroots network, and a serious commitment to do the right thing for poor people in our nation and around the world.”

Those efforts have paid dividends. The U.S. government now spends about billion a year on national nutrition programs, which Beckmann said have been a lifeline for millions of families.

At the same time, he argues that food assistance is not enough to end child hunger. Also necessary are measures to increase incomes and opportunities for poor people, such as tax credits that put additional money into the pockets of working families.

To that end, Beckmann said Bread for the World is trying to get President Barack Obama to outline a detailed plan to achieve a campaign promise he made in the 2008 election to end child hunger in America. In addition, the group strongly supports the administration’s worldwide bid to reduce hunger and strengthen food security in poor countries.

“President Obama and Secretary of State Hillary Clinton are mobilizing an international effort to reduce world hunger, mainly by investing in agriculture in poor countries,” Beckmann said. “We are thrilled the administration is leading the global hunger and food security initiative. We think that it is really well planned. This is part of what Bread for the World members have been praying for for 35 years — having the U.S. government lead the global effort to reduce world hunger.”

Beckmann said Bread for the World is currently pushing the U.S. government to restructure its foreign assistance program to better target the needs of the poor. His group, in tandem with others, helped to persuade more than 100 members of the House of Representatives to sponsor a sweeping foreign aid reform bill. Grassroots members have also strongly urged Senate Foreign Relations Committee Chairman John Kerry (D-Mass.) to support foreign aid reform. Kerry and his colleague, Sen. Richard Lugar (R-Ind.), the top Republican on the Foreign Relations panel, introduced a foreign aid reform bill this past spring.

“We will continue to campaign to make U.S. foreign assistance more effective. We want international poverty reduction and development to be a higher priority,” Beckmann said.

Bread for the World has long been pushing wealthier nations to help their developing counterparts by retooling their foreign policies. In the late 1990s, the group participated in a broad international coalition that advocated for debt relief for low-income countries. This helped many governments, especially in Africa, overhaul their budgets so that less is spent on interest payments and more for housing, education and poverty relief. Beckmann noted that nearly 30 million more African children go to school because of this debt relief initiative.

For example, in December the institute published “The 2010 Hunger Report: A Just and Sustainable Recovery,” which argues that there is a compelling need to confront the related threats of hunger, unemployment and the long-term effects of climate change. Addressing all of these issues, it declared, is necessary for a just and durable economic recovery from the worst recession this country has seen in 75 years.

Beckmann also founded and heads up another affiliate, the Alliance to End Hunger, which reaches out beyond Bread for the World’s church network to engage diverse institutions such as Jewish and Muslim groups, secular charities, corporations and universities in building the political will to overcome hunger and poverty.

Looking to the future, Beckmann wants to strengthen Bread for the World’s capacity for advocacy, doing more training for lead activists, strengthening its grassroots network and developing better strategies for involving congregations. He also envisions the group working on a wider range of issues such as agriculture and trade policy, climate change and immigration, and he wants to use new technological tools to communicate better and cultivate younger and more diverse members.

“If we carry out this plan, we will indeed change history for hungry people,” he said.

The United States and the world, Beckmann argues, are at a pivotal moment. Despite the persistence of poverty and hunger over the millennia, Beckmann argues that tangible progress can now be made against these maladies. “We live in a time in which it is possible over the next two decades to dramatically reduce poverty and hunger in the United States and around the world. Ending mass hunger and poverty over the next two decades is something that would please God very much.”

He believes that whether the U.S. government does its part to put the world on track to overcome hunger depends on whether people of faith and conscience insist on it. This also requires that Bread for the World members do what Beckmann said God is calling on them to do.

“The God of the Bible calls on us to do right by the poor and not just as individuals but also to work for just laws. You do not have to go far into the Bible to see that God cares about poor people.”