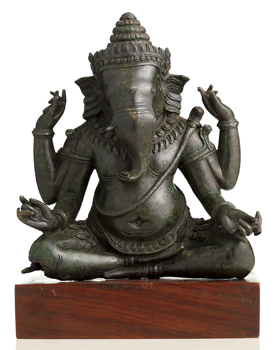 Today, a bronze sculpture of Buddha from 12th-century Cambodia stands erect, much as it did for worshipers so many years ago. But when the statue was excavated on the grounds of the temple in Angkor Wat in 1931, it lay in nine pieces.

Experts put the Buddha together but the hands soon fell off. It was not until recently that they were reattached successfully, revealing their position in the sign for “fear not.”

That is just one of the success stories emerging from the National Museum of Cambodia’s Metal Conservation Laboratory, which the Smithsonian’s Arthur M. Sackler Gallery and Freer Gallery of Art helped to establish five years ago. In fact, were it not for that partnership, “Gods of Angkor: Bronzes from the National Museum of Cambodia,” on display at the Sackler through January, might look quite disjointed, if it had happened at all.

The show is the first exhibited collaboration between the museums and the first international display to focus specifically on Khmer bronze casters. It features 36 bronze pieces dating from late prehistoric times to the 15th century on loan from the National Museum of Cambodia, which has an inventory of 7,000 bronzes.

“We tried to select pieces that are among the best in the museum,” said Paul Jett, head of the conservation department here.

The goal, added Louise Allison Cort, curator of ceramics for the Freer and Sackler, is to demonstrate that bronze was important for casting images of cultural and religious significance for centuries. People in mainland Southeast Asia began casting bronze objects some 3,700 years ago, mostly personal ornaments. Larger pieces began being made about 1,000 years later.

The show’s two prehistoric pieces — the “Kandal urn” and a bell, both from the fourth century B.C. to the second century — leave much to the imagination.

“We don’t know the meanings or the uses of the prehistoric pieces,” Cort said. “But certainly when both Buddhism and various forms of what we now call Hinduism came into Southeast Asia from India — and also ideas about images of Buddhism in particular came in from China as well — bronze was the material that was favored whenever possible to cast images of those deities and to make the ritual objects that were used in the worship of those deities,” she explained.

“There are early wooden Buddhist images from temples found in southern Vietnam, in an area of Vietnam that once was part of the Khmer cultural world. But for the most part, the images that survived certainly are bronze images, so the suggestion is that bronze was the most important medium in Southeast Asia as it had been in India for casting religious images.”

Indian traders and priests introduced Hindu gods to the region in the pre-Angkor period (sixth to eighth centuries), while Buddhist texts and images arrived with Chinese Buddhist pilgrims who passed through on their travels to and from India.

The Indian influence is apparent in the 13th-century bronze of “Ganesha.” A son of Shiva, a God in some forms of Hinduism, Ganesha’s yogic posture and hand gestures suggest he was meant to be worshipped with Tantric leanings, which were significant in Angkor when the figure was made.

Khmer metalworkers adapted the foreigners’ images into ones that fit local traditions, creating a look all their own.

“The way in which the bodies of the figures are represented are distinctive,” Cort said. “The facial structure is certainly distinctive and close to the appearance of a Khmer person, but even more abstractly than that, the way in which the bodies are represented is very full, very sensuous, very different, for example, from images of related periods in Thailand, where the images are much more attenuated and sort of ethereal, rather than full of that sense of vitality.”

That sensuality is apparent in a voluptuous, full-breasted kneeling female figure from the first half of the 12th century that may represent an attendant within the Angkor royal palace.

Besides statues of gods, the show also includes ritual pieces such as a bronze conch shell, an incense burner and a rice ladle.

Although many of the bronzes were found by skilled archaeologists, some were discovered in surprising ways, Jett noted. For example, the Kandal urn was found in 1948 when a peasant family was using the prehistoric object to carry water on long journeys. In 2006, a woman digging a hole to plant a tree unearthed seven tiny figurines dating to the sixth and seventh centuries.

Cort hopes the exhibit opens people’s minds to parts of Cambodia’s history that are often overshadowed by the Western tendency to focus on the Khmer Rouge, the notorious Communist group that ruled the country from 1975 to 1979, during whose reign almost 2 million people died of murder, torture or disease.

“I hope [visitors] come away with a really positive feeling about the historical culture of Cambodia,” she said. “Lots of what is written about Cambodia tends to go back to the Khmer Rouge period, just as what’s written about Vietnam in our media goes back ostensibly to the Vietnam War. There’s so much more that can be learned and said about Cambodia.”