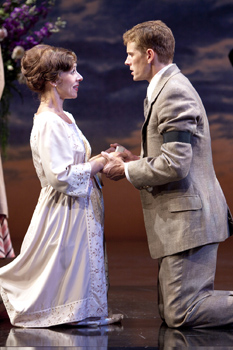 Nor Does It End Well at Shakespeare Theatre

Everyone knows the expression “All’s Well That Ends Well.” Even those unversed in Shakespeare use the infamous phrase to describe a situation that finishes happily after a long and bumpy road. The irony is that the play that follows the title is not so popular — something the Shakespeare Theatre might have been wise to pay attention to before billing the story as its season opener.

“All’s Well That Ends Well,” originally classified as a comedy, is now considered by some critics to be one of the Bard’s “problem plays,” because it doesn’t neatly fit as a comedy or tragedy. That should have been a red flag, even for Artistic Director Michael Kahn, whose ambitious efforts to produce lesser-known scripts have been traditionally successful.

The plot for “All’s Well” has most of the ingredients of a Shakespeare comedy, which, paradoxically, is its downfall. The Bard’s well-rehearsed themes of mistaken identity, cruel gags played on undesirable characters, and unrequited love that becomes reciprocal are all present in this script. The play’s “problem” arises because it simply isn’t humorous. The script comes off as a comedy gone awry, and audiences are disappointed by the lack of witty banter and engaging characters they expect from an evening of Shakespeare.

Above, Miriam Silverman stars as Helena and Tony Roach as Bertram in the Shakespeare Theatre Company’s production of “All’s Well That Ends Well,” directed by Michael Kahn, which also features Marsha Mason, left, as the Countess of Rossillion.

The remedy, however, would seem doable. The play just needs a shot of adrenaline — a feat accomplished by the Shakespeare Theatre time and time again. The theater is legendary for transforming plays into realms that lie far outside most imaginations. Its use of creative costuming, scenery, lighting, and top-notch talent and direction have worked magic on far more formulaic scripts. But surprisingly, just when it most needed to over-accessorize, the decision was made to produce this play sans frills. The result is deadly.

The plot’s theme of unrequited love has comedic and scandalous possibilities; yet the main characters, Helena and Count Bertram, are disappointingly lackluster in both the original script and in this interpretation. Helena, skillfully portrayed by Miriam Silverman, is tragically lucid and level-headed in her obsessive pursuit of Bertram. Meanwhile, Bertram, played rather stiffly by Tony Roach, avoids Helena’s desires with little emotion. One fix could’ve beeen a calm and calculating Helena steadily imposing her will on a naïve and flustered Bertram. Or the opposite: An unflappable Bertram coupled with an unruly Helena. But two characters who lack passion make for a tedious evening. Even a much-anticipated performance by Marsha Mason (“The Goodbye Girl”), as Bertram’s mother, is monotonous in her concern over her son’s aversion to marriage.

In all fairness, it is not enough to criticize the play’s direction; the script is at the very least, difficult to swallow. Psychological coherence suffers, for example, when Helena, the orphaned daughter of a famous physician, miraculously cures the King’s illness that has kept him confined to a wheelchair. It also doesn’t help when in the final scene, Bertram switches from hating Helena to loving her in just one line. Perhaps if his line — “If she, my liege, can make me know this clearly, I’ll love her dearly, ever, ever dearly” — was played sarcastically, audiences might believe Bertram’s reaction and be satisfied. In this production, however, the line is played straight, with Bertram staring longingly into Helena’s eyes. The result is unfortunately fake.

Another unwelcome surprise is this production’s lack of tantalizing scenery and costumes. Granted, audiences familiar with the Shakespeare Theatre have been spoiled and trained to expect extravagant sets that are often used to compensate for lackluster scripts. Here, this is not the case. Because Helena and Bertram’s unlikely courtship is set against the backdrop of a European war, Kahn decided to frame his play during World War I. “I was looking for a period that was modern enough so that war would actually mean something to us and one where you could see that women were educated and were on the cusp of a change in their social role,” he said.

This decision though doesn’t do any favors for Robert Perdziola’s costumes, which are fittingly drab for the World War I era. And Court Watson’s set — a light-blue arch in front of an unexplained sunset, with a few trees thrown into Act II — is distractingly unimaginative.

In the end, it takes more than one mishap to turn audiences away from the Shakespeare Theatre. After all, even Shakespeare is entitled to (and as witnessed here, experienced) writer’s block. But if and when this happens, perchance it is best to quietly wait for inspiration. Decline the lesser works and set more realistic sites on the gems, or at least be prepared to polish the diamond-in-the-roughs a bit more thoroughly.