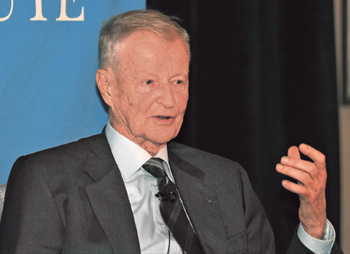 Two days after the election that returned President Barack Obama to the White House for a second term, one of America’s best-known former diplomats offered his take on the world — and the audience found his observations just as relevant as they were three decades ago.

Zbigniew Brzezinski, national security advisor under President Jimmy Carter from 1977 to 1981, didn’t mince words when it came to Obama. “He has to undo the excessive reliance on speeches as he acts on the world scene — that is to say, the apparent assumption that a powerful speech on this or that subject is the same as effecting change,” Brzezinski said. “The speeches all promised a great deal, but a great deal did not transpire. There was some marginal progress here and there, but by and large, his speeches remain speeches.”

The Polish-American diplomat, 84, gave his own speech Nov. 8 at the Aspen Institute’s Ambassadors’ Security Roundtable luncheon at the Four Seasons hotel; moderating the discussion was CNN’s Washington-based foreign affairs correspondent Jill Dougherty. In attendance were some 75 guests, including ambassadors representing a range of countries from Afghanistan to Zambia, as well as lobbyists, consultants and various State Department officials.

The event was part of the recent launch of the Ambassadors’ Security Roundtable, a quarterly convening of ambassadors from around the world to promote greater international cooperation in the critical realm of security. The luncheon followed an off-the-record gathering of European envoys at the Aspen Institute’s Wye River campus on Maryland’s Eastern Shore in October.

Brzezinski, whom Dougherty introduced as a “living legend,” said that in 2008, “at a lunch of this sort,” he spoke of how impressed he was with the president-elect’s “knowledge and understanding of the basic dynamics of this era.”

Four years later, Brzezinski argued that Obama must reassert his credibility on the world stage through serious commitment and decisive action that will shape both his legacy and the country’s trajectory.

“The management of our foreign policy and the protection of our national security are interwoven, and the president has no peer,” Brzezinski said. “Congress is not a partner in the shaping of foreign policy. That is the special domain of the president, and he has to regain that territory.”

It’s territory Brzezinski has traversed for decades. During his time as Carter’s national security advisor, Brzezinski oversaw the normalization of U.S. relations with China, the overthrow of the Shah in Iran, the rise of mujahideen fighters in Afghanistan, the growth of dissent in Soviet-influenced Eastern Europe, the signing of a treaty to relinquish U.S. control over the Panama Canal, and the brokering of the Camp David peace accords between Egypt and Israel.

The chairman of countless commissions, task forces and councils, Brzezinski has been in the foreign policy trenches since the 1960s. The elder statesman remains active today, teaching at universities such as Harvard, Columbia and Johns Hopkins and writing numerous widely regarded books, including his most recent: “Strategic Vision: America and the Crisis of Global Power.”

In the 2012 book, Brzezinski argues that U.S. policymakers need to rethink the country’s place in an interdependent world where America is no longer the sole superpower — adapting to shifting geopolitics while reasserting American influence in order to preserve global stability.

“Indeed, the ongoing changes in the distribution of global power and mounting global strife make it all the more imperative that America not retreat into an ignorant garrison-state mentality or wallow in self-righteous cultural hedonism. Such an America could cause the geopolitical prospects of an evolving world — in which the center of gravity is shifting from West to East — to become increasingly grave,” he writes. “The world needs an America that is economically vital, socially appealing, responsibly powerful, strategically deliberate, internationally respected, and historically enlightened in its global engagement with the new East.”

These were all themes Brzezinski expanded on at the Aspen Institute luncheon, where, among other things, he advised Obama “to make a special effort to put the American-Chinese relationship on an even keel. Election rhetoric contributed to rising tensions with China. We have to be very careful how we define our role in the Far East — and it isn’t sufficient to define it in military terms. He also has to reaffirm support for Europe at a time when it’s in crisis. We need a new Atlantic Charter, which in the darkest days of World War II was a vision of the future for Europe and America. We need something like this again.”

Brzezinski, who was born in Warsaw in 1928, witnessed the rise of Nazism as a child during the four years his father, a diplomat, served in Germany. Tadeusz Brzezinski was then posted to the Soviet Union for two years during Joseph Stalin’s Great Purge. In 1938 — the year before Hitler invaded Poland — the elder Brzezinski was transferred to Canada, and after the 1945 Yalta Conference allotted Poland to the postwar Soviet sphere of influence, the family decided not to return. The Cold War deeply affected the young man, who grew up determined to help Eastern Europe counter Soviet domination and eventually came to support détente and peaceful engagement with Moscow.

Yet the world is a very different place today than it was four years ago when Obama first moved into the White House. The biggest difference is not so much Russia or Europe but the Arab Spring, which has seen the fall of dictatorships in Egypt, Yemen, Tunisia, Libya and now quite possibly Syria.

However, according to Brzezinski, what’s happening in the Arab world cannot exactly be compared to the overthrow of communism in Eastern Europe and, later, the collapse of the Soviet Union itself — despite what he called the “oversimplification” of recent events by the mass media.

“Populism can lead to democracy, but is not in itself a democratic phenomenon. It takes time for populism to become permeated by democratic principles and the ability of compromise. Central Europe had that in the 1990s because there was a history, so over time it acquired democratic attributes,” he explained.

“In the Middle East, it’s a much more emotional reaction against deprivation, corruption visible at the top, unfair wealth and the impact of mass communications. It’s a phenomenon of political outrage, which can go in religious, extremist directions, or it’s a gradual process. It’s really much more complicated than just a democratic uprising.”

One way to regain America’s waning influence in the region, Brzezinski suggested, is to stand up to Israeli Prime Minister Benjamin Netanyahu, both on the issue of Jewish settlements in the West Bank and on Iran’s nuclear program.

“If you look at public opinion polls in Israel and the U.S., and to some extent among Palestinians, the predominant position is still to seek a peaceful solution — but a Palestinian state has to be based on compromise,” he said.

“Netanyahu is pursuing the expansion of settlements in the West Bank and Jerusalem. We are mouthing repeatedly our phrase that this is not consistent with Israel’s legal obligations. If we’re serious, we have to make it very clear that either both [sides] desist, or they both go ahead. We can’t be more interested in peace than they are.”

Brzezinski’s talk came just before the latest explosion of violence in the Gaza Strip and Israel. It also preceded the vote at the U.N. General Assembly to upgrade Palestine to a nonmember observer state by an overwhelming majority — and Israel’s retribution for the diplomatic maneuver: the announcement of plans to construct 3,000 housing units in East Jerusalem and the West Bank. Those plans include a highly sensitive area known as E1; critics say building on the strategic plot of land would destroy chances of a viable Palestinian state. The Israeli move infuriated European governments in Britain, France and Spain, which summoned Israeli ambassadors to lodge formal protests, although the United States only issued a token rebuke.

Despite helping to broker the 1979 peace treaty between Egypt and Israel, Brzezinski has never been known to be particularly sympathetic toward the latter.

In recent years, he’s praised Carter’s description of Israeli occupation of the West Bank as state-sanctioned apartheid and has stated publicly that Washington’s relationship with its closest Middle East ally was the result of Jewish pressure.

Once slated to become an official advisor to Obama, Brzezinski was passed over for the job after lawmakers of both parties warned that his anti-Israel sentiments would damage Obama at the polls.

Brzezinski still remains adamantly opposed to a military strike against Iran, whether from Israel or the United States — even if the Islamic Republic is on the verge of obtaining a nuclear weapon.

“This can be solved either by agreement or by intimidation, but not by war,” he contends. “War with Iran would be explosive and destructive for the entire region. I think the president [must] gradually move away from the notion that force is the last resort. It’s not a resort at all. Sanctions will continue and will eventually cause a change in Iran, but the U.S. should make it explicitly clear that if Iran makes a threat against any Middle Eastern state, we will react exactly the same way as if the Soviet Union had done this toward Western Europe, or if Japan is threatened by North Korea.” Brzezinski scoffed at the “red lines” demanded by Netanyahu in the Israeli leader’s speech in September — complete with cartoon-like nuclear bomb — before the United Nations General Assembly.

“The less ambiguity on the subject, the better. Don’t forget that sanctions are having an enormous impact already. It’s evident from the way the Iranians are reacting,” Brzezinski said. “But if you think the threat of nuclear war recedes if we attack Iran, just think of the consequences of such a war. Pakistan is much more likely to become a radical Islamic state. Are we supposed to also disarm Pakistan as the next phase?”

Brzezinski said the Obama administration should foster the emergence of moderate Israeli leaders willing to make compromises with the Palestinians to achieve a two-state solution. (As of press time, Netanyahu looked headed for an easy victory in Israel’s upcoming Jan. 22 election.)

“The Israelis are moving into a period of choosing between more right-wing and semi-fascist leaders. There’s a very militant extreme, and also a left of center which still desires peace — [Ehud] Olmert, [Tzipi] Livni, maybe [Ehud] Barak. These are options we ought to be encouraging,” Brzezinski said. “The Israelis are very aware that their long-term survival depends on America, and we haven’t made any progress in that direction. The Israelis have to realize that they must have a prime minister who can work closely with the president.”

He added, ominously: “I’m really doubtful about Israel’s survival once the United States is pushed out of the region.”

After his speech, Brzezinski fielded questions from several prominent people, including Paul Wolfowitz — former president of the World Bank and one of the architects of the Iraq War — who wondered how the Obama administration could be persuaded to “take the lead” in training and arming Syrian rebels.

Jane Harman, director of the Woodrow Wilson International Center for Scholars (profiled in the July 2012 People of World Influence column), asked what Israel could do to build a coalition among Palestinians that would require Hamas to renounce violence against the Jewish state. And Alia Hatoug-Bouran, Jordan’s ambassador to the United States, asked how to stop the building of Jewish settlements in territory the Palestinians one day hope to incorporate into their new state.

“Netanyahu can’t succeed in colonizing the West Bank,” Brzezinski responded. “What’s at stake is the future of the region, and our position because of our association with Israel. To perpetuate and deepen the existing hostility is, in the end, a prescription for historical drama that’s likely to end in tragedy. We have to have guts. We cannot do it simply by acquiescing to Netanyahu.”