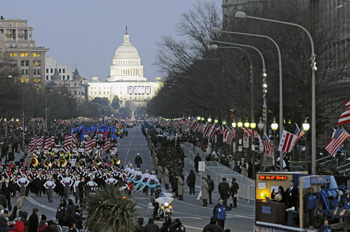 In January, after the Christmas tree lights are taken down and menorah candles blown out, D.C. hunkers down for winter. Those cold, dreary months after the holidays can seem like forever to residents of America’s northernmost southern city (it is below the Mason-Dixon line), who are more accustomed to the swamp-like conditions of summer and early fall. But every four years, the onset of seasonal depression is postponed by the glittering galas and presidential pageantry of the inauguration.

The quadrennial festivities are both solemn and celebratory. The historical occasion inspires even the bitterest partisans to momentarily put aside their differences, and sometimes even brings people closer together. It was at President Reagan’s 1985 inaugural gala that soon-to-be House Foreign Affairs Committee Chairman Ed Royce (R-Calif.) proposed to his wife Marie. She and her husband, then a California state senator, attended the star-studded event along with Hollywood icon Frank Sinatra, musical legends the Beach Boys and Lou Reed, and legendary ballet dancer Mikhail Baryshnikov. The once-in-a-lifetime event proved to be the perfect occasion for asking a once-in-a-lifetime question.

Participants make their way down Pennsylvania Avenue during the inaugural parade in 2009. In addition to the estimated 1.8 million people who watched that inauguration, more than 5,000 men and women in uniform provided military ceremonial support, a tradition dating back to George Washington’s 1789 inauguration.

But inauguration isn’t all glitz and glamour. To kick off the 57th Presidential Inauguration on Jan. 21, President Obama is continuing a tradition he started in 2009, asking citizen volunteers to give back in honor of Martin Luther King Jr.’s legacy on Jan. 19, the National Day of Service.

However, unlike the last inauguration, this time around Obama will allow unlimited corporate donations to help foot the bill for the big show. In 2009, the president barred any corporate money and capped donations to $50,000, though the legal limit for an inauguration contribution is $250,000.

The recent change, announced in the midst of the “fiscal cliff” negotiations, could be yet another sign that Obama is working to make amends with Wall Street. It could also just reflect the exhaustion of a financially drained electorate after the costliest presidential race in U.S. history and the need to find additional donors to fund the inauguration.

But even if more money flows in this year, that doesn’t necessarily mean the party will be grander. For one thing, it will be tough to top the jubilation and genuine emotion of the 2009 inauguration, which saw America’s first black president sworn into office. Nearly 2 million people converged on Washington to witness that historic event. Metro, for one, is only expecting about half the ridership levels from 2009.

Indeed, Politico recently reported that the dearth of event planning as of early December, compared to the flurry of four years ago, may signal a more subdued atmosphere for this year’s festivities.

“Several K Streeters and Capitol Hill aides said the slower planning pace makes sense, since they expect fewer official galas and a more somber tone,” wrote Anna Palmer and Donovan Slack. “The economic recovery is still fragile and the fiscal cliff negotiations are at a near standstill, introducing a big unknown into planning the festivities.”

Whatever the mood, the show will go on (as will the many inaugural balls and parties) and is sure to generate excitement both in D.C. and across the nation. The theme for this year’s inauguration: “Faith in America’s Future.”

Despite the different themes, moods and political fluctuations every four years, the Constitution is actually very specific about the comings and goings of Congress and the president, making for a well-choreographed transition. Per the 20th Amendment, President Obama’s first four years officially end on Jan. 20. The swearing-in ceremony is usually held that same day (at noon), but since the 20th falls on a Sunday this year, the public swearing-in ceremony is scheduled for Jan. 21, Martin Luther King Jr. Day. To avoid running afoul of the Constitution and exposing ourselves as an orphaned, leaderless nation for 24 hours, a small, private swearing-in ceremony will be held on the 20th. Similar arrangements were made for Presidents Eisenhower and Reagan, whose second-term inaugurations were also subject to the “Sunday exception.”

This year’s ceremony will also enter the digital age, with its first-ever Facebook page (hat tip to Bill Clinton for bringing inaugural events into the information age with the first live Internet broadcast in 1997). The social media savvy of event organizers has come a long way since James K. Polk’s swearing in was the first to be reported by telegraph in 1845.

Plans for the 2013 inauguration were already under way as of early December, when the Presidential Inaugural Committee was launched, with actress Eva Longoria serving as one of its co-chairs alongside other big-time but lesser-known donors. Earlier, a separate Joint Congressional Committee, chaired by Sen. Charles E. Schumer (D-N.Y.), began laying the groundwork for the inaugural activities at the U.S. Capitol.

In January, congressional offices will start distributing some 250,000 free tickets, at their discretion, to the swearing-in ceremony in front of the Capitol. Ticket holders will watch the event from a reserved section in front of the podium, while the National Mall, starting at 4th St., NW, will provide standing-room only space for those not lucky enough to score a ticket. The best seats in the house are those on the inaugural platform. Currently under construction, the roughly 10,000-foot platform is where a select group, including the first family and cabinet officials, will sit during the swearing-in ceremony. Among those with an up-close view is the diplomatic corps.

Ambassadors are taken to the ceremony by the State Department’s Protocol Office (see cover profile) and seated in a reserved section according to how long they’ve been credentialed here. Claudia Fritsche, ambassador of Liechtenstein, described the occasion as a “unique opportunity” for diplomats serving the usual four-year term. Having been Liechtenstein’s envoy to the United States and to the United Nations in New York before that, this will be Fritsche’s fourth time attending the ceremony. 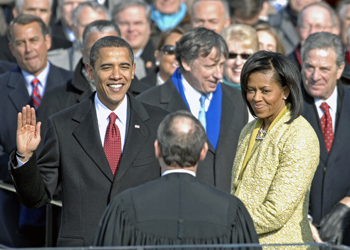 Barack Obama, with his wife Michelle Obama, is sworn in as the 44th U.S. president by Supreme Court Chief Justice John G. Roberts Jr. in 2009.

Four years ago, when Obama became America’s first African American president, the procession was fittingly led by Ambassador Roble Olhaye of Djibouti, the longest-serving foreign envoy in Washington and dean of the diplomatic corps. The African ambassador will lead the procession again this year. Following the ceremony, diplomats are typically invited to a reception at Blair House, the President’s guesthouse for visiting heads of state.

After the swearing-in ceremony, inaugural address and luncheon, the president and vice president lead a procession of some 11,500 marchers, including military regiments, floats, marching bands and citizens’ groups, down Pennsylvania Avenue, from the Capitol to the White House. Past parade participants include an Eskimo dance troupe and the Red Hot Mamas, an Idaho women’s club “dedicated to the exploitation of merriment.” The inaugural parade, which is organized by the Joint Task Force-National Capital Region, is quite a spectacle to behold. The free event attracts a large crowd, making a good vantage point hard to come by.

Located beside the Newseum on Pennsylvania Avenue, the Canadian Embassy is prime real estate for taking in the parade. In years past, the Canadian ambassador hosted a small viewing party on inauguration day, but in 2009 the embassy stepped it up a notch, inviting more than 1,500 government officials, business leaders, foreign diplomats and members of the media to watch the swearing in and inaugural parade from the embassy’s elevated courtyard.

A similar event in the works for 2013 is sure to be a hot ticket. At this year’s inaugural “tailgate,” guests will enjoy Canadian beer, BBQ and beaver tails — a popular Canadian fried dough pastry, not the animal — which will be served from food trucks. Obama tried a beaver tail, in fact, on a trip to Ottawa in May 2012.

A jumbotron will provide an up-close view of the swearing-in ceremony, and members of the Royal Canadian Mounted Police (affectionately known as “mounties”) in their red dress uniform will salute the president as the parade passes by the embassy. The event’s theme — “friends, neighbors, partners, allies” — captures the post-partisan atmosphere of the inauguration as differences are momentarily set aside for a day of national celebration.

Of course, no inauguration would be complete without the balls, a highlight of the festivities for those who like to celebrate in style (and those who prefer to be indoors, in close proximity to a bathroom). There are a handful of official balls (there were 10 in 2009; the exact count for 2013 had yet to be determined as of press time). The president and first lady make a stop at all of the official balls. The State Department generally coordinates invites for ambassadors to attend the official balls; in 2009, many diplomats went to the Eastern Regional Inaugural Ball at Union Station.

But there are also plenty of unofficial parties — galas and dinners, large and small — hosted by state societies and a hodgepodge of organizations. The National Association of Minority Government Contractors is hosting a ball, for example, as is Ford Motor Co., which is pairing with the Smithsonian for a gala at the National Air and Space Museum. There’s the annual Black Tie & Boots Inaugural Ball held by the Texas State Society at the Gaylord, the Hawai’i State Society Inaugural Ball, the Illinois Presidential Inaugural Celebration, the Clean Energy Ball, the Green Ball, the Purple Ball and practically whatever other color or state one can think of. Most are held at hotels; a few have been held at embassies.

Tickets can range anywhere from $75 to $500 and up, depending on the event. Some are well-established galas; others ad hoc parties looking to drum up money through ticket sales and sponsorships, so do your homework before shelling out for a spot.

Among this year’s crop of newcomers is the Ambassadors Inaugural Ball, to which the diplomatic corps will be invited. Billed as an opportunity to promote international peace, unity and diplomacy, the black-tie affair is the brainchild of Tebelelo Seretse, Botswana’s ambassador in Washington; Detroit businessman and Honorary Consul General of Botswana Robert Shumake; and Ambassador of Trinidad and Tobago Neil Parsan, who will serve as host committee co-chair.

“In addition to saluting President Obama, this historic event will recognize the critical roles that ambassadors perform every day to promote peace and diplomacy as well as garner support for humanitarian causes,” said Parsan in a press release. “With the world’s attention focused squarely on Washington, D.C., and the inaugural activities, we hope to use the occasion to bring much needed attention to the pressing issues plaguing our world, including poverty, human trafficking, AIDS, global warming, lack of medical care and food security.”

A portion of the proceeds from ticket sales will go to KENO Micro Fund, a group that supports youth entrepreneurs with micro-loans, and several yet-to-be-announced nonprofits. The international gathering, scheduled for Jan. 21, will be held in an American setting: the Mead Center for American Theater at Arena Stage.

For more information on the 57th Presidential Inauguration, visit www.inaugural.senate.gov or http://washington.org/topics/inauguration.