Home The Washington Diplomat June 2019 By The People Is Back to Explore Life, Liberty and Pursuit of Happiness 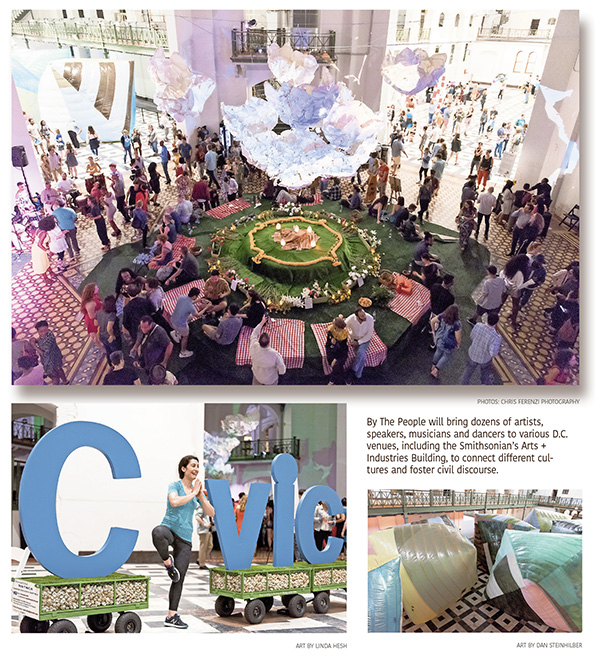 By The People is back in Washington, D.C., this June with an expanded lineup of blockbuster art installations and dialogue programs examining the theme of life, liberty and the pursuit of happiness — and it’s all free.

The festival made a splash with its introduction to Washington’s arts scene in 2018, bringing dozens of artists, speakers, musicians and dancers to town (also see “By The People Pursues Ideals, Innovations in New Citywide Festival” in the August 2018 issue). The goal is to connect different people and cultures and foster open, civil discourse about timely issues such as equity and justice. Last year saw over 26,000 visits to the festival’s eclectic mix of events, which ranged from interactive art installations to go-go performances to an augmented reality art hunt.

Now it’s returned for a second year from June 15 to 23 for an even bigger exploration of the theme at the heart of this citywide arts extravaganza organized by Halcyon, a nonprofit with a stage series and arts incubator to its name.

“Our 2018 inaugural festival went far beyond our expectations. Building on the success of last year, this year’s festival will once again be in every quadrant of the city,” Kate Goodall, CEO of Halcyon, told The Washington Diplomat in a statement.

Goodall said there is “tremendous excitement” this year around several new additions, including a river barge that will move up and down the Potomac and Anacostia rivers. “The floating art installation by For Freedoms co-founder Hank Willis Thomas, titled ‘THEY ARE US, US IS THEM,’ will stop in Georgetown’s Washington Harbour, Capitol Riverfront and Anacostia. Just as the festival is intended to connect people, the barge will create moments of connection, joy and engagement,” she said.

This year’s festival is curated by Jessica Stafford Davis, a McLean, Va., resident and founder of The Agora Culture, an online multicultural arts platform that supports emerging artists of color. The inclusion this year of the river-based installation is especially relevant to her interpretation of the theme, she said.

“The Anacostia River, in particular, has been a symbol of division between ‘the haves and the have-nots,’” Stafford Davis said. “I look forward to the discussion this may bring about how we sometimes unknowingly isolate communities around us.”

On that note, a series of dialogues, co-produced with Politics and Prose, will examine the city’s burgeoning arts scene and its long history of civil discourse. Other events range from photographs by João Pina of Portugal, to a large-scale outdoor net sculpture at CityCenterDC, to a program series that examines the human right to safe drinking water and sanitation presented by the Spanish and Mexican embassies.

There are four main hubs for those looking to participate in By The People: the Smithsonian’s Arts + Industries Building, Union Market, CityCenterDC and the river barge. Other locations include the Anacostia Arts Center, IA&A at Hillyer, DC Arts Center and several additional locations scattered throughout the city. And like last year, together with the Smithsonian, the festival will host a “Solstice Saturday” on June 22, with free programs and performances at Smithsonian museums open until midnight.

“My work focuses on people and communities that have been muted. I am shining a light on voices that find themselves on the sidelines,” Stafford Davis said. “I aimed this year on bringing together artists that would make people think and contemplate on how they see the world and what people outside their community face.”

Artist Kahlil Joseph — perhaps best known for his collaboration with Beyoncé on her “Lemonade” album — is presenting his new audio-visual installation “BLKNWS,” which emerged as a major hit at the Venice Biennale. The two-channel video broadcast imagines a cable news network that resembles what viewers might come across on CNN, Fox News or MSNBC in the real world. But Joseph manipulates the power of film and incorporates samples of popular culture, archival material and filmed news desk segments to blur the lines between journalism, art and cultural criticism. Throughout the festival, visitors will be able to find the installation at Union Market, at Mason’s Barbershop on H Street, NE, and on TV monitors at the Eaton Hotel, with minimal signage suggesting what is playing.

“I wanted different vantage points and lenses in which to look at the world, ultimately helping us move toward unity and empathy,” Stafford Davis said. “Artists are joined together under this theme by making the viewer see the present and contemplate the future. For example, we have Kahlil Joseph’s new work, ‘BLKNWS,’ which critiques Western civilization through the lens of the African American experience.”

For returning guests, there are a few new additions to the By The People festival this year that were spurred by lessons learned in 2018, Goodall noted.

“We heard from many people that the festival wasn’t long enough, so we’ve expanded to nine days this year. We also heard how much visitors enjoyed the art installations, but they also wanted the opportunity to purchase art. So this year we’ve added an art fair, in partnership with Monochrome Collective, featuring the work of 31 emerging D.C. area artists who deserve to be showcased along with international superstars such as Kahlil Joseph. The fair, which kicks off a week before the festival on June 8, will undoubtedly generate excitement for what’s to come,” she said.

With this year’s theme exploring the country’s founding principles of life, liberty and the pursuit of happiness through the lens of justice and equity, Stafford Davis added that it should be a particularly vibrant event for those in the diplomatic community.

“Having spent my entire life in the Washington region, I know how engaged the diplomatic community is in the DMV’s rich cultural offerings,” she said. “D.C.’s embassies host film festivals, art installations and performances. Here is another opportunity to celebrate the arts and artists that make our city an arts destination and a wonderful place to call home.”

June 15 to 23
throughout Washington, D.C.
www.bythepeople.org