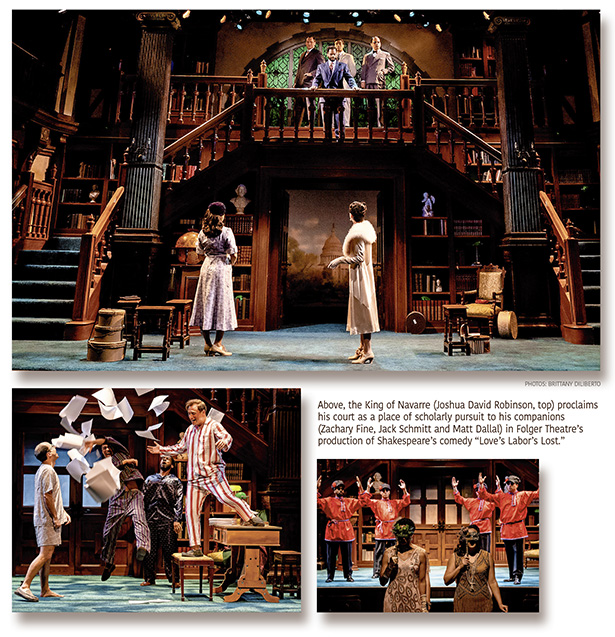 It’s hard to tackle “Love’s Labor’s Lost,” one of Shakespeare’s earliest comedies, for a variety of reasons. The play’s complicated wordplay, harebrained plot, pedantic humor and obscure literary allusions are some of them. But Folger Theatre’s current production rises to the occasion of making this play an enjoyable romp thanks to its inventive direction, superb acting and gorgeous costumes and set.

The tale is as such: The King of Navarre and his three lords swear an oath to scholarship, which includes fasting, study and, most importantly, no contact with women for three years. Knowing Shakespeare’s preference for romantic mix-ups, one can guess how that last promise plays out. Almost immediately it is put to the test when the love-starved men are visited by the fetching Princess of France and her three lovely courtiers. As can be expected, the men succumb to their temptations and pursue the women — all while each trying unsuccessfully to hide their fall from grace from their cohorts. Although there’s not much meat to the plot, the Bard makes up for this fact with over-the-top antics — naturally there are hidden identities and lost letters — sophisticated rhymes and entertaining characters.

For example, devoted bachelor Berowne — arguably the most engaging of the king’s lords —has issues with the strictness of the oath and makes a long speech in which he argues that to look at a woman is the best way to learn beauty, and that their collective scholarship oath has led them further away from true study. The king buys his logic and the men all resolve to openly pursue the women. His reasoning is infectiously adorable.

In an effort to bring fresh life to the play, director Vivienne Benesch has set the comedy in the 1930s, when Depression-era folk sought out gay amusement to forget their troubles — a theme that syncs perfectly with this play’s plot. In the ’30s people would escape to the movie houses as a temporary distraction from their monetary woes. In the play, the men use the distractions of women to ignore their monastic vows, finding ways to rationalize their pursuit of the forbidden gender.

Instead of a king’s castle, set designer Lee Savage stages the play inside a beautifully refined library that replicates the Folger Library’s Paster Reading Room. The well-appointed reading room — spot-on for the king and his lords’ three years of study — is adorned with floor-to-ceiling wooden bookcases, a second-floor stained-glass window and warm lighting.

The acting in this production is accomplished, but the performance that stands out the most is from Zachary Fine, who plays Berowne. Shakespeare has written him to be the most outrageous of the lords and Fine personifies this characterization with relish.

Berowne stands out as the lord not eager to sign the abstinence pledge and tries to talk his way out of parts of the oath he doesn’t like. He calls the requirements “barren tasks, too hard to keep … not to see ladies, study, fast, not sleep,” but finally agrees to a decree that “can be forsworn on mere necessity.” Fine steals the stage while making the king and others look foolish trying to honor vows that are impossible for them to keep. Berowne later refers to his friends as “wretched fools,” even though he finds himself in exactly the same position of trying to secretly profess his love to Rosaline, one of the princess’s ladies.

Another overly conspicuous character is Don Armado, played by Eric Hissom. Armado, a Spaniard visiting the court, sends a letter to the king, informing him that he has caught Costard, a comic country bumpkin, and Jaquenetta, a sensual maiden, consorting together and thus has sent them to the king for punishment. The twist comes when we realize that Armado is in love with Jaquenetta himself. Hissom portrays Armado comically with a thick accent and histrionic gestures, so much so that the other men mock his inferior intellect and criticize his pronunciation and written letters, saying they “abhor such rackers of orthography.” Although Hissom overplays this role as bit, one must admit he is hilarious.

This play gets its charm from its dichotomies. The men, who are self-professed cerebral academics, fall madly in love with the women on first sight — clearly not for intellectual reasons. Their images of themselves and their actions make a mockery of what they think they stand for. At the same time, they use heady language and word play, which contradicts their personalities and actions.

Here, Shakespeare is clearly poking fun at the upper class, scholarship and masculine desire as the women take the upper hand in their courtship, and ultimately reject their offers.

Were the men’s hot pursuits all for naught? Maybe for the gentlemen in question, but not for the audience who gets to enjoy every moment of their debacles.