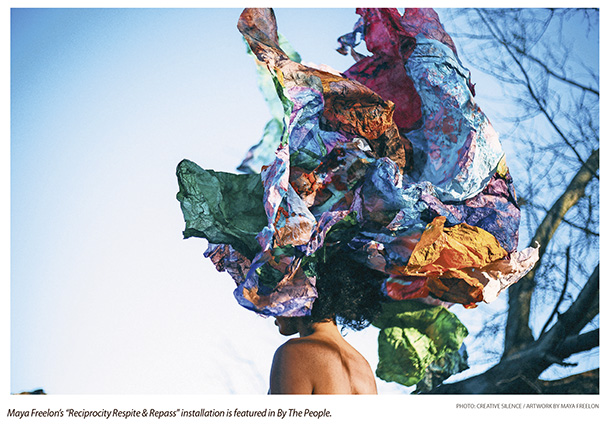 A new international arts and dialogue festival — themed around America’s founding ideals — has arrived in Washington, D.C., with grand ambitions to shake up the city’s arts scene and status.

By The People, held across over a dozen locations from June 21 to 24, was designed to showcase an array of performances, art installations and speakers with a particularly Washington bent. Inspired by the theme of “life, liberty and the pursuit of happiness,” the festival aims to promote empathy, build cultural bridges and spark a civil discourse at a time when the nation’s discourse is anything but.

It hosted dozens of artists, speakers, musicians and dancers — with most events almost entirely free to the public. And unlike many other festivals, the featured events were anything but conventional. Highlights included an augmented reality art hunt; knitting and crocheting sculptures that paid homage to nurses; an interactive installation that mimicked a prison cell; mindfulness workshops that let participants become artists; a 20-year time capsule of letters written to the next generation of women; discussions where people were randomly paired with strangers or explored topics such as whether true human connection can be found online; and a nontraditional dance performed inside a 17-foot U-Haul truck.

Last summer, Halcyon, a nonprofit organization with a stage series and arts incubator to its name, gathered together a group of arts leaders to discuss the idea of bringing this type of event to D.C.

“We just mentioned we thought it was high time that D.C. had its own international arts and dialogue festival, and we found nothing but agreement,” Halcyon co-founder and CEO Kate Goodall told The Washington Diplomat before the festival kicked off. “We all felt this rising tide of this true creative arts scene in D.C., that is more than just a stop between New York and Miami, with so many unique assets and free museums.”

The festival taps into the “bubbling cauldron and increasing energy around the arts here,” Goodall noted.

The question, then, was what such a festival would look like. Two main pieces emerged: one, that the festival should be as accessible as possible, and two, that given the location in the capital of the United States, it would need to be a festival that highlighted and created “substantive connections and building bridges,” she said.

“Everyone who is involved has sought to accomplish that through arts, dialogue and community activities,” Goodall noted.

With those two ideas in mind, the creators crafted a schedule of largely free events, with just a few scattered ticketed performances on the lineup. A free shuttle was arranged to bring people between all the sites, stretching across every quadrant of the city. Names like Nick Cave, Neko Case, Imran Qureshi, BalletX and more hit the lineup, with dozens of other singers, artists, dancers and lecturers from around the world dotting the impressive array of events associated with the citywide festival. 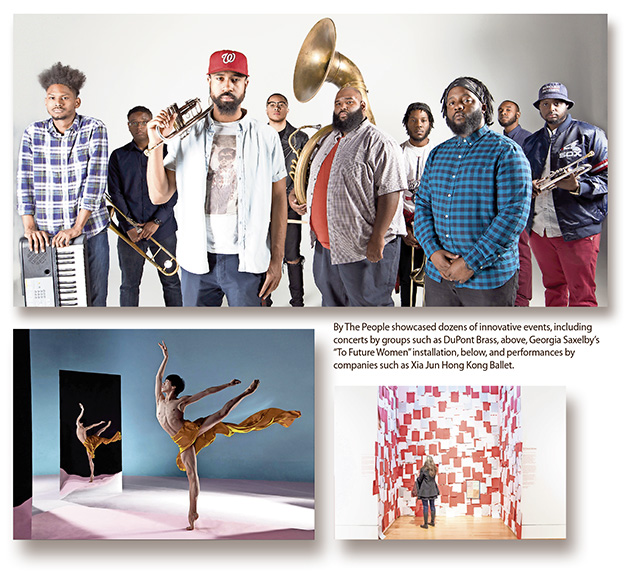 The iconic, recently renovated Smithsonian Arts and Industries Building stands as a hub, but organizers wanted to make sure the festival stretched beyond the National Mall, so “we had a base of operations in every quadrant,” Goodall said, with other key locations including Union Market and the Washington National Cathedral.

From projections created by up-and-coming artists to the Smithsonian’s “Solstice Saturday” on June 23 that had most museums keeping their doors open until midnight, the festival sought to “create this osmosis” for visitors, Goodall said. There was an augmented reality piece of art at each of the five main hubs, an array of pop-up performances, a diverse line-up of speakers and “nice little surprises at every site,” she said.

A driving question behind the creation of the festival itself was how to catalyze conversation, she added. “How do we get people who may not have run into each other before to talk to each other? People from Ward 3 to Ward 8? From different parts of the world?”

By The People looks to the driving idea of “life, liberty and the pursuit of happiness,” with organizers framing the conversations and the arts with that powerful phrase from the Declaration of Independence in mind.

Goodall said that while the festival has borrowed certain things from major international festivals, like the Aspen Ideas Festival, Art Basel and SXSW, the goal was to make something special to D.C.

“Really, we wanted to start with the idea, if D.C. has an international arts and dialogue festival, what does that look like? Certainly one way we’re deviating from those other festivals is that it’s free and inclusive — we really wanted to focus on that,” she said.

It’s an ambitious undertaking for the first year of a four-day arts extravaganza, which had a number of sponsors and partners including the Smithsonian, the D.C. government, Lyft, Whole Foods and others.

“We want to see how it goes in the first year,” Goodall told The Diplomat. “It’s been a really fun challenge to launch a festival like this, with this kind of magnitude, in one year.”

“The hope is that this is something that appeals to everyone and has a component that everyone can find interesting, even if they don’t love the whole thing,” she added. “We’ve really tried to create layers, so people can come as families or on their own, from out of town or from D.C.”

“By the People” ran June 21 to 24 throughout Washington, D.C. For more information, visit halcyonhouse.org/by-the-people.