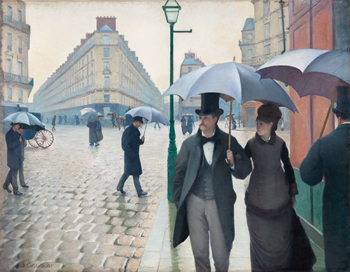 Gustave Caillebotte’s “Paris Street, Rainy Day” is among the works in two fascinating shows at the National Gallery of Art.

The National Gallery of Art recently debuted two large, rewarding and scintillating exhibitions that at first glance seemingly don’t have much in common but upon closer inspection, offer viewers a rare glimpse into two uncommon artists.

The exhibitions — both generously expansive and thorough — celebrate and examine the work of Gustave Caillebotte, an unsung talent of French impressionism, and Joachim Wtewael, whose varied oeuvres more than 200 years earlier left their mark on the Dutch Golden Age.

“Gustave Caillebotte: The Painter’s Eye” is the first major U.S. retrospective of the artist’s work in 20 years, focusing largely on Caillebotte’s (1848-94) depictions of the Parisian bourgeoisie and the dramatic changes brought about by modern city life. Meanwhile, the nearly 50 works that make up “Pleasure and Piety: The Art of Joachim Wtewael (1566-1638)” comprise the artist’s first monographic exhibition and explore his fascination with portraits, mythology and religion.

Caillebotte’s singular 1877 painting “Paris Street, Rainy Day” is the centerpiece of his show, both encompassing aspects of impressionism and announcing the departure from classic French salon styles. A pious Calvinist, Wtewael’s works are rich in vibrant colors and almost lurid in their quasi-religious themes.

Arthur K. Wheelock Jr., curator of the National Gallery’s Northern European art collection, introduced Wtewael’s show by noting that there aren’t any obvious links — whether in period, styles or manner — between the two artists. “There really isn’t a connection, except maybe for the fact that both men were wealthy and well off and came from a certain class of people, and there’s the fact that their names are difficult to pronounce.”

But sometimes biography is, if not everything, indicative of some things. In the annals of artist lives — with all the attendant bipolar sufferings, economic hardships and “starving artist” clichés — the lives of the underappreciated Caillebotte and Wtewael seemed to be, by all appearances, ones of contentment. 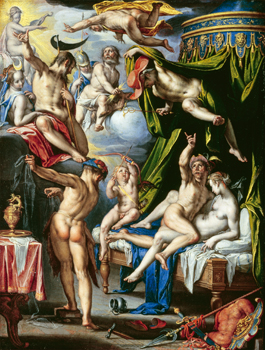 Both came from the upper classes. Wtewael was astute at gaining lucrative commissions and was a highly successful businessman, owning a flax business, along with real estate and stock equities. Similarly, Caillebotte didn’t even bother to sell his paintings because he was already well off from familial inherited wealth, and instead he often collected the work of his artist friends. Neither starved and both were free to pursue their passion for art.

There’s something quiet about their lives, if not their paintings. Wtewael was recognized in his lifetime and certainly sold well, having understood his patrons and the temper of his times. Caillebotte didn’t need to paint for a living, which may account for the fact that while his paintings are considered part of the impressionist lore (he organized the 1877 impressionist exhibition in Paris), they also diverge from the storyline.

Caillebotte is an impressionist, but he’s more than that. “Paris Street, Rainy Day” has a certain sheen to it, but it goes beyond the hazy luster of impression with a realism that captures the Parisian urban renewal spearheaded by Baron Haussmann on behalf of Napoleon III. It’s a clean scene punctuated by round, gray umbrellas, dark, upper-class clothing, the triangular building at the center and cobbled streets so tidy you could eat off them. Striking lines, symmetry, shadows and a super-sharp focus are also at the heart of the bridge featured in Caillebotte’s “The Pont de l’Europe,” as people and the occasional dog complement the industrial strength of the structure. 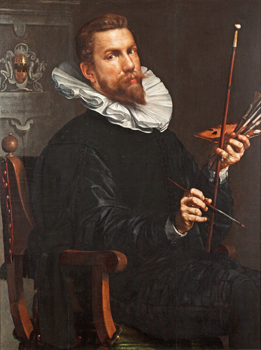 These paintings are enticing in the detail and precision they celebrate, not unlike Edgar Degas’s ballet scenes. There’s also an undercurrent of storytelling in Caillebotte’s off-kilter portraits, including an emotionally packed scene of a couple by a window — the woman looking out, the man reading a newspaper and the distance between them large. Later, Caillebotte’s landscapes both depart from and anticipate the post-impressionist era — from his flat yet inviting rivers and fields to the sweet fruits of his still lifes.

When it comes to content, Wtewael was a different animal altogether. An affluent pillar of his community in Utrecht, he understood his elite clientele but also embraced and pushed the taste of the times. He touched on both religion and sex, and in “Pleasure and “Piety,” we see portraits of family members, witty mythological depictions and moralizing biblical scenes. Here, ancient Greeks and Romans meet the New Testament, while the flesh of the gods frolics among the gospels.

Some of Wtewael’s paintings are larger than life — breathtaking circus shows of color, detail and action — while others are equally electric but in miniature, painted in tiny form on copperplate.

An orthodox Calvinist — a somewhat austere form of Protestantism — Wtewael understood the call of the flesh and its varied shades of beauty. When you’re sourcing the Roman poet Ovid, some license and licentiousness is to be expected. Consider, for instance, all the flesh on view in “Mars and Venus Surprised by Vulcan,” with Vulcan being the spouse, Mars the lover and Venus the wife, plus attendant muscular, deeply tanned viewers. 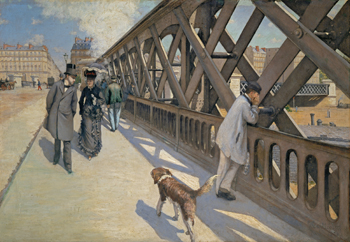 Wtewael’s real gift comes to the fore in mixing religious themes with daily life, as seen in the down-to-earth “Kitchen Scene with the Parable of the Great Supper.” In foreground is a woman cleaning up from the night’s accumulation of waste — wine poured, fish on the floor and a woman fending off the advances of an eager swain — while deep in background you can make out Jesus and his apostles at a table.

Both exhibitions are expansive, hinting at the personalities of each painter and the subjects they portrayed. Their self-portraits, in fact, reveal interesting tidbits about each man: Wtewael seems almost challenging and self-assured, with his aggressively pointy beard, the sumptuous collar of the time period and a strong grip on his paintbrushes, full of ownership and intent. Caillebotte comes across differently. You can see an almost stony, defensive look and strong features in one self-portrait, and something less direct, more elusive in an earlier self-portrait of him at work with a vague Renoir painting behind him, his hands also holding paintbrushes.

Whatever movement you might associate with these two artists, they relished their particular life and tastes and their paintings reflect that. Up until now, though, many of these works retreated into relative obscurity until being rediscovered for the important genius that they represented. It’s only fitting that the two artists now share space — and recognition — at the National Gallery of Art.

through Oct. 4
National Gallery of Art
on the National Mall between 3rd and 9th Streets at Constitution Avenue, NW
For more information, please call (202) 737-4215 or visit www.nga.gov.