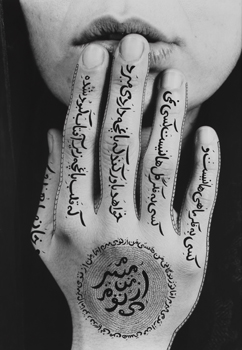 Shirin Neshat has become renowned for provocative works such as her 1996 series “Untitled (Women of Allah)” showing women’s bodies inscribed with Farsi poetry.

Summer headlines are abuzz with updates and analysis of the recent nuclear agreement in Vienna. Open any major media outlet and Iran is likely to have a comfortable place somewhere in front. Yet many American readers are comfortably removed enough to either absorb the news or flip right past it in search of last night’s game or the latest think piece about online dating.

But for those born in Iran, there is no distance. Tehran is their daily think piece. They cannot just turn the page.

“Every Iranian artist is, in one way or another, political,” said Shirin Neshat. “Politics has defined our lives.”

Neshat is the artist behind the lens at the Hirshhorn Museum’s exhibit “Facing History,” a film and photography collection on identity and power in Iran, Neshat’s home country.

Born there in 1957, Neshat left for the United States in 1975 to finish high school and go to college. After a visit home in 1978, she made the choice to stay overseas in America during the turmoil of the Iranian Revolution and the Iran-Iraq War. But she couldn’t stay away, returning in 1990 with her camera.

“She was utterly astounded by the transformed culture and society,” said Melissa Ho, curator of the Hirshhorn exhibit. “When she left, it was still the regime of the Shah. When she came back, a revolution had occurred. The way they dressed, communicated with each other was very different from what she remembered.”

It was there, Ho says, that Neshat began to feel a disconnect with the religiously conservative Iran she encountered and the cosmopolitan society she remembered, turning to her camera to capture what was lost. “She had missed this incredible event. I think it was sort of this effort to, in some small way, have contact with what had happened.” 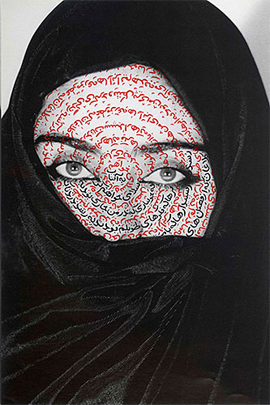 What “happened” next was a collection called “Women of Allah,” a series featuring Iranian women with Farsi text written on the surface of the photographs. In Neshat’s statement, she points out four recurring elements: the text, the veil, the gun and the gaze.

“Despite the Western representation of the veil as a symbol of Muslim women’s oppression, the subjects of these images look strong and imposing,” she said. “In fact, the use of the black veil as a uniform has transformed the feminine body into that of a warrior, determined and even heroic. The women’s confident possession and firm grasp of the gun, the phallic object of masculine power, not only reiterates this transformation but also charges the images with a certain eroticism.”

Moving from photography into film, Neshat produced “Turbulent,” a video installation consisting of two screens facing each other, one featuring a male singer and the other a female singer. The work shines a light on the Iranian practice of banning women from participating in musical performances. The man sings to a full house while the woman has no audience.

“The women in her work are the ones who rebel,” Ho said. “They’re also the ones with the most to lose. They try to take control of their destinies and express themselves.”

Ho uses the interactive structure of “Turbulent” to point out how Neshat pulls others into not just the work but also the experience of the Iranian citizen. “As a viewer, you’re caught in between two screens so you have to choose in your bodily movements how to take in the piece, which screen to face. You’re not in a passive role.” 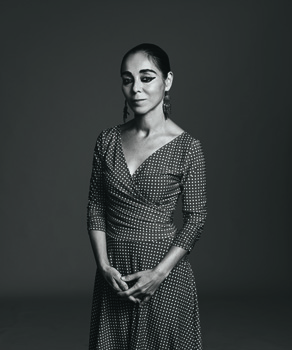 Ho said Neshat’s penchant for challenging her viewers also spilled into her ideas for curating the exhibit. Instead of the traditional approach, which might show the entirety of an artist’s work, usually arranged chronologically, Neshat wanted to experiment and try something different.

“We knew we wanted to focus on Iran itself,” Ho said. “We all wanted to showcase the country and what it has been through.”

So Iran became the main character and the show a visual civics lesson. Divided into movements, “Facing History” is concentrated into the 1953 coup d’état that brought the U.S.-backed Shah to power; the 1979 Iranian Revolution that deposed the Shah; and then the Green Movement after the 2009 Iranian presidential election. Though it may seem that Neshat plays the role of teacher with the audience as her pupils, the artist acknowledges that she was every bit the student in this process, using her work to educate herself on the struggles and experiences of the Iranian people, specifically women, in the movements she watched from overseas.

Neshat’s thought-provoking work has made her one of the most renowned contemporary artists to come out of Iran, although the New York-based Neshat has not returned to her homeland since 1996. Yet the exiled artist continues to have a profound impact on how Westerners view the Islamic theocracy.

“She has observed and engaged with Iran throughout her career,” Ho said. “I think this provided her a chance to kind of reflect on all of that. What she kept saying over and over to us is that this show is her graduation.”