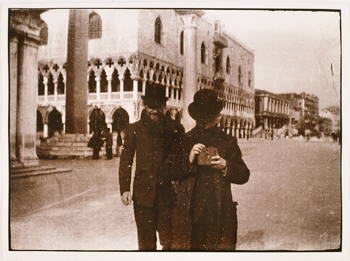 We live in a time when practically any of us, assuming we have the time, the inclination, the imagination and a bit of luck, could come up with a pretty good photograph that could even be called “art.”

Among the works in “Snapshot: Painters and Photography, Bonnard to Vuillard” are a photograph of Pierre Bonnard, Ker-Xavier Roussel and Edouard Vuillard in Venice in 1899.

We live, after all, in the age of the digital camera where you can erase, edit and Photoshop images at will. It’s all part and parcel of a climate of instantaneous reinvention and re-dos.

Picture-taking wasn’t quite as easy — though it may have been less bewildering technologically speaking — for the artists in “Snapshot: Painters and Photography, Bonnard to Vuillard” at the Phillips Collection. This wonderfully elastic and ambitious exhibition connects the paintings and drawings of post-impressionist artists to the often-voluminous number of photographs they took at the dawn of photography (a staggering total of more than 10,000 photos, some 200 of which are on display here).

Yet all of these artists embraced the new medium of photography, not only understanding that it could inspire their art, but also grasping the concept of what it was: a way to freeze and make mementos of places, people, occasions and moments in time that were essentially ephemeral.

It was the invention of the Kodak handheld camera in 1888 that spurred this creative evolution, which today may appear quaint and antiquated given Kodak’s recent bankruptcy, a victim of the rapidly changing digital times.

Yet for post-impressionist painters, and pretty much everyone of the era, these new Kodak cameras were as revolutionary as trains. And artists naturally did what everyone else did with the new technology: They snapped shots of their vacations, the streets where they lived, and the people with whom they lived, documenting their private routines. 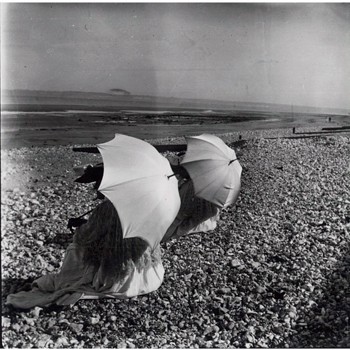 At the same time, these photographs are an extension of their professional passions, and when exhibited alongside their paintings, prints and drawings — 70 of which are featured here — they reveal striking parallels in cropping, borders, lighting, silhouettes and vantage points. These artists repeated subjects and compositions to achieve certain effects, for example, and studied light and perspective through the lens in ways that mirrored their brushstrokes on the canvas.

Photography clearly informed certain pieces on display here. The common, almost identical elements in some of the photos and paintings — Vallotton’s umbrellas on the beach, for example, or Rivière’s repeating vision of the Eiffel Tower — are unmistakable.

Or take for instance Evenepoel with his self-portrait in a three-way mirror — a photograph that makes you curious about the man, especially when you see his sunny, energetic photograph of a woman named Louise repeated in a haunting painting called “The White Hat.” Both were executed in 1897 and hint at the use of photography as inspiration, or as substitute for sketchbooks. A Belgian, Evenepoel was considered an extremely gifted artist. The evidence suggests just that; unfortunately there isn’t much of it because he died at the age of 27 from typhoid.

While thousands of photographs by the others remain behind, only 20 by Vallotton survive. Rumor has it that he destroyed much of his photographic work because he was, probably unfairly, criticized for making paintings based on photographs.

Vuillard seems to have made the most of photographs echoing the thrust of his paintings, with both brilliantly reflecting the otherwise modest drama of domesticity.

In contrast, Breitner shot kinetic photographs of his favorite city, Amsterdam, experimenting with light and infusing a kind of blurry movement into his photos to paint a picture of modern urban life that can be both bustling yet lonely.

But there’s just not enough paintings, drawings, lithographs or “art” by the lesser-known artists on display here, which undermines the suggestiveness of comparisons. The other problem with an exhibition that focuses on early photography is that the images on the wall are minuscule, so you have to get up close, almost illegally, to see them clearly. For a more contrasting effect, go to the catalogue.

Not all of the works lend themselves to direct comparison anyway. Because these were seasoned artists, you’d expect that their photographs would be somehow more artistic than amateurs who were just beginning to discover cameras, or even those who expressed their art solely through photography. But that’s not always the case. 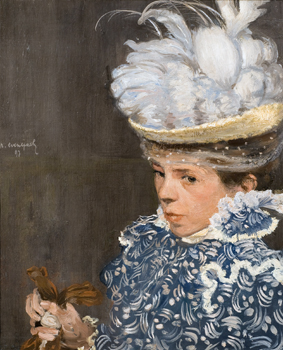 Not everyone made photographs that resembled paintings, nor did they necessarily try to make photographs that served the same function as their art. Painters such as Bonnard were also just taking pictures — though certainly the photos could be considered beautiful — and exploring the nuances of capturing a moment in their private lives. It was in a sense a departure from their comfort zone, recording an exact, detailed reality, as opposed to portraying a subject through blurred dabs of color to get at the true heart of it.

“The private photographs of these artists — especially Bonnard and Vuillard, whose works are pivotal to the Phillips Collection — reveal their keen eye for the modern world. The unguarded snapshots of their loved ones and the city streets allow us to see life as the artists saw it,” said Phillips Director Dorothy Kosinski.

The exhibition is indeed a treasure trove of insights into the lives of these artists during the post-impressionist period. They emerge as actors, travelers, husbands, fathers, sojourners and citizens of time and place.

In a way, they also resemble children trying to capture butterflies or fireflies in a jar, entranced by their energy and wanting to contain it. Some of the best photography in this exhibition appears to have been done on the fly. There’s something intimate about scenes caught by insistent accident, the desire — often tactile, eager — to capture a fleeting moment by artists discovering a new way in which to view their world.