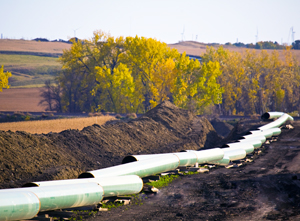 Embroiled in a political and regulatory quagmire that has prevented Canada from acting on ambitions to supply the United States with more crude oil, the Canadian American Business Council (CABC) gathered top energy experts this June to talk about charting a path forward. But the event was also meant to give Canadian Ambassador Gary Doer (and other like-minded pols and wonks) a platform to make the case for giving the green light to the Keystone XL pipeline, part of an aggressive, years-long lobbying and diplomatic push by the Canadian government.

America “is a can-do country,” Doer said to a crowd gathered at the Canadian Embassy. “It just needs a can-do approval process.”

Canada already pumps oil into the United States through Keystone pipes (the U.S. imports more oil from Canada than any other country in the world). What’s at stake here is a proposed extension to the pipes — the XL — that would ultimately allow the transport of 830,000 barrels of crude oil a day from Alberta, Canada, to the Gulf of Mexico for refinery. In the eyes of the Canadian government, it’s a common-sense solution to help meet America’s energy needs. But a serious opposition, stemming mostly from environmental concerns that range from the risk of oil spills to higher greenhouse gas emissions, has successfully fought off the new pipes — so far, at least.

To the chagrin of Doer and others, the Obama administration has largely punted on the issue. The White House claims to be letting the approval process run its course in advance of offering a final opinion. (Because the pipeline crosses international boundaries, the State Department must approve it.) But many interpret this as a convenient excuse to avoid rendering judgment on a politically divisive issue ahead of the November midterm elections, in which vulnerable Democrats stand to lose the Senate.

The Canadian government, however, isn’t the only actor interested in seeing the additional pipelines approved. A number of American politicians on both sides of the aisle, particularly from states that stand to benefit economically from the project, are working to push legislation through Congress.

“I think the Keystone pipeline should have been built a year ago,” Sen. Mary Landrieu (D-La.) said recently on “Morning Joe.” It will create thousands of jobs and make North America an independent “energy powerhouse,” she argued. Landrieu, who chairs the Senate Committee on Energy and Natural Resources, is in the midst of a tough re-election battle and approval of the project could boost her campaign prospects.

Landrieu did not attend the Canadian Embassy event, but a number of other elected officials who support Keystone did, including Sens. John Hoeven (R-N.D.) and Ron Johnson (R-Wis.), Rep. Bill Owens (D-N.Y.) and Rob Merrifield, a conservative member of the Canadian Parliament.

Keystone proponents like to remind the public that the pipeline makes sense from a security standpoint.

“The biggest winner if the pipeline is not approved is Vladimir Putin,” Doer claimed, arguing that Canada and Mexico offer a much more “predictable” supply of oil than other energy-rich countries around the world such as Russia.

Shortly after returning from a Senate mission to Ukraine last spring, Hoeven argued that approving Keystone XL has become a strategic imperative.

“Seeing how Ukraine and the European Union are dependent on Russia for energy, our delegation saw firsthand the importance of energy security,” Hoeven said in a statement. “Projects that boost North American energy production like the Keystone XL pipeline are a key not only to creating jobs and a dynamic economy, but also to keeping our nation and our people safe.”

In his frequent public appearances touting Keystone (and most likely in his many meetings with Congress and the White House), Doer often recites the mantra that Washington is better off getting its oil from a close ally such as Canada than a country like Venezuela or a Middle East kingdom.

But that simplistic sound bite overlooks the fact that the oil from Keystone is not necessarily intended for U.S. consumption — some of it would go on the world market and be exported to places such as Asia.

In fact, the United States doesn’t really need Keystone to become energy independent — the extraction of energy from shale rock is helping the country do that on its own. The United States is already overtaking Russia as the largest producer of oil and natural gas in the world, and it will remain the world’s biggest oil producer this year after beating out Saudi Arabia and Russia.

Nevertheless, the United States and Canada are critical energy partners. Canada is home to the world’s third-largest proven oil reserves (after Saudi Arabia and Venezuela) at 172.8 billion barrels, 168.7 billion of which are in oil sands (also referred to as tar sands). And while the International Energy Agency predicts America will overtake Saudi Arabia as the world’s largest oil producer by 2020, it will still rely on oil imports to meet its energy needs.

Proponents of Keystone also point out that Canada and Mexico have a greater commitment to protecting the climate than other would-be oil suppliers.

Oil-rich countries in the Middle East “and members of OPEC are not part of the climate change strategy that Canada and Mexico have agreed to,” said Doer, a former three-term premier of Manitoba who, as an ambassador, has been unusually vocal in lobbying for Keystone.

That enthusiasm has attracted criticism that Doer, who racked up environmental and climate change victories in Manitoba, should not be acting as a salesman for the energy industry. 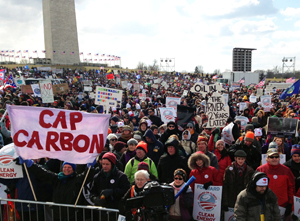 Tens of thousands protested the Keystone XL pipeline in February 2013, calling for action on climate change. But will these protests continue to fight off the new pipes?

Doer though dismisses such criticism as uninformed, retorting that the Keystone blowback is driven by Hollywood celebrities and an “environmental industry” in Washington that has turned the dispute into a fundraising tool.

And despite what the opposition says, Keystone backers claim it is an environmentally sound choice.

“If you are an environmentalist, you would be advocating for the Keystone pipeline,” Merrifield said, because transporting the oil through railway is less energy efficient, the Canadian parliamentarian and others pointed out. According to the State Department, using rail to transport the oil as opposed to the proposed pipelines would result in 28 percent to 42 percent more greenhouse gas emissions. Recent high-profile accidents involving trains carrying oil have also cast a light on the dangers of shipping oil via rail.

All of these claims, however, have been ferociously disputed by the groups who oppose the expanded pipelines. They argue that Keystone will do little to make America energy independent while harming the climate and putting critical natural resources at risk.

Nebraskan farmers, some of the most vocal critics of the project, worry that if (and perhaps inevitably when) the pipes leak, the spill would destroy the Ogallala Aquifer. One of the largest aquifers in America, the Ogallala is a primary water source to farmers and ranchers in Nebraska and neighboring states.

“Keystone XL will pollute our water, pollute our air, and tarnish our American values by prioritizing Big Oil over American citizens,” Randy Thompson, a Nebraskan rancher who has become the poster child for the opposition, wrote in an open letter to the Senate in the spring.

Major environmental organizations such as the Sierra Club and the Union of Concerned Scientists oppose Keystone on the grounds that it will exacerbate climate change (by drilling for tar sands, one of the dirtiest fossil fuels around) and distracts from what should be the real focus: clean energy solutions.

“Keystone XL is critical to the Canadian oil industry’s extreme pursuit to reach 6 million barrels per day production of destructive tar sands by 2030,” Sierra Club writes in an issue memo, “a level that would effectively destroy any chance of limiting the increase in global temperature to 2° C, the maximum increase recommended by scientists to avoid disastrous climate disruptions.”

The State Department has said that oil extracted from tar sands in Alberta generates about 17 percent more greenhouse gas emissions than conventional crude. At the same time, it issued a report in January concluding that Keystone XL would not significantly contribute to carbon pollution. It also said that even without the pipeline, the Alberta forests would still be mined for carbon-heavy oil, which could then be transported by rail.

Similarly, TransCanada, the company behind Keystone, warns that if Washington doesn’t approve the project, the oil will simply go elsewhere. Indeed, Canadian companies are already trying to build new pipelines as an alternative to Keystone.

Green groups, however, argue that there are no viable substitutes to Keystone because other proposed pipelines are deeply unpopular with local communities and rail transport is prohibitively expensive. Keystone is the most direct, cost-effective way to ship the landlocked oil from Canada to the U.S. and without it, TransCanada won’t have any other means of developing its oil sands and that in and of itself will help slow down climate change. TransCanada disputes that claim as a specious attempt to kill the project.

Critics also point out that the number of jobs TransCanada claims Keystone will create is vastly inflated and that most of the benefits are on the Canadian side.

TransCanada has funded a multimillion-dollar lobbying campaign and pubic charm offensive to counter those claims and present Keystone as a job-boosting, bipartisan strategy to wean America off unfriendly oil. Green groups, meanwhile, have launched their own counterattack, with star-studded support from celebrities such as Daryl Hannah and Danny Glover.

Despite those costly and glitzy efforts, the Senate has yet to clear a bill approving the project.

As the debate over the pipeline drags on into its sixth year — TransCanada initially proposed the extension in 2008 — some argue that the amount of attention it has received is disproportionate compared to the impact it will have on the environment.

In a story titled “The Keystone Fight Is a Huge Environmentalist Mistake,” Jonathan Chait argues that the Keystone battle only amounts to a symbolic fight against global warming. When cap-and-trade legislation collapsed, Chait suggests, activists used Keystone as a vehicle to keep the fight against climate change energized.

“Keystone is at best marginally relevant to the cause of stopping global warming,” Chait writes, citing a Congressional Research Service survey that found the pipeline would add the equivalent of anywhere between 0.06 percent to 0.3 percent of U.S. greenhouse gas emissions per year.

And with the United States becoming a major global energy producer in its own right, other environmental battles — such as the health effects of fracking for shale gas and the Environmental Protection Agency flexing its regulatory muscles to curb greenhouse gas emissions — may eventually sideline the Keystone opprobrium.

That, in part, is why politicians gathered at the CABC energy summit remained optimistic about eventually winning the war over Keystone. There are two reasons to believe that chances will be higher after the November elections: Republicans could take control of the Senate (the Republican-led House has already approved Keystone legislation) and Democrats will no longer be worried about how it affects their campaign prospects.

Pressed to guess when Congress might actually see a Keystone bill clear both chambers, Hoeven, the North Dakota senator, said it’s only a matter of time.

“When we have 60 [votes to prevent a Senate filibuster], we will attach it to something [Obama] won’t veto,” Hoeven said. That will happen “not too long after the first of the year.”

For his part, Ambassador Doer was bullish on Keystone’s eventual passage, predicting a verdict by the spring of 2015 — when Obama “uses science” to make his decision.

Eliza Krigman is a contributing writer for The Washington Diplomat.