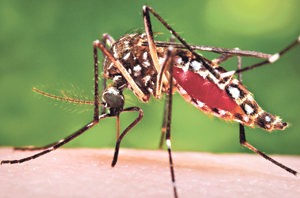 You might not be able to pronounce the name of the latest rampant mosquito-borne viral infection, but you’ll never forget chikungunya (chi-koon-goon-ya) if you catch it.

The aedes aegypti mosquito carries both the deadly dengue fever and the chikungunya viral infection that is now spreading rapidly throughout the Caribbean.

Commonly known as CHIKV (chick-vee), chikungunya first attracted notice last year in the Caribbean and has now spread to the United States as a very unpleasant souvenir of island vacations. It’s spread by the aedes aegypti mosquito, the same culprit that carries the more deadly dengue fever. Chikungunya isn’t as virulent, but the joint pain and fever it causes can make sufferers pretty miserable.

Chikungunya is actually a very old virus that was first identified in Tanzania in the 1950s. Scientists believe it evolved much earlier than that, around the year 1700. It doesn’t kill very often, with a fatality rate of about .4 percent (infants and the elderly are most vulnerable) compared to 1 percent to 10 percent for dengue. But the weeks of symptoms can be quite miserable, and for some people, chronic joint pain can persist for years after the initial illness subsides.

The name comes from an East African dialect and means “bend you up” or “to become contorted,” and on a research trip to the Dominican Republic in July, I heard it over and over again. “Chikungunya,” sighed a young man at a meeting, explaining why he hadn’t been in his office the past two weeks. “Chikungunya,” said a mother in a community health center, gently guiding her exhausted-looking teenage daughter to a chair. The Dominican Republic, which shares an island with Haiti, has had nearly 200,000 suspected cases of the viral infection since December, more than any other country in the current outbreak.

Locally transmitted cases of chikungunya have cropped up on at least 22 Caribbean islands (the first was on St. Maarten/St. Martin in December 2013), and as of mid-July, nearly 200 “travel-associated” chikungunya cases had been reported to the U.S. Centers for Disease Control and Prevention, the majority in Florida. In all, the Pan American Health Organization estimates there have been 350,000 suspected cases of the disease throughout the Americas.

So far, there have been no cases of locally transmitted chikungunya reported in the United States. It’s not clear why — we certainly have the right mosquito population, especially in the southeastern United States. Some scientists think it’s only a matter of time before the U.S. gets hit as well.

“The mosquitoes that transmit dengue and chikungunya are endemic in 31 U.S. states,” Malcolm Thomas, president and CEO of Arbovax, a North Carolina company now trying to develop a vaccine for CHIKV, told local news stations in Raleigh. “So it’s not difficult to realize how, if you get some infected people, that you will get a whole new infection cycle in the U.S.”

That’s not because people are spreading it directly to each other: Transmission of chikungunya requires a mosquito bite, and you can’t get it through contact with someone who’s ill. But if travelers to the Caribbean return home with the virus and are then bitten by local mosquitoes, those mosquitoes could pick it up and spread it more widely, something that may be more likely now that mosquito season is fully underway in most of the United States.

But for now, the biggest concern should be protecting yourself from the virus if you’re traveling to an outbreak area. (In addition to the Caribbean, chikungunya is endemic in Central and Southern Africa as well as Southeast Asia.)

The CDC recommends that travelers take the following precautions:

If you experience a sudden high fever, debilitating joint pain and rash shortly after a trip to an outbreak area, see your doctor and be sure to share your travel history. That’s mostly to be sure of exactly what you have and to help track outbreaks because unfortunately, there’s no cure for chikungunya and no vaccine yet, despite the hopes of the North Carolina company. All you can really do until the virus subsides is to drink lots of fluids to avoid becoming dehydrated, take over-the-counter pain relievers and fever reducers like ibuprofen, and burrow down in your bed to get plenty of rest.