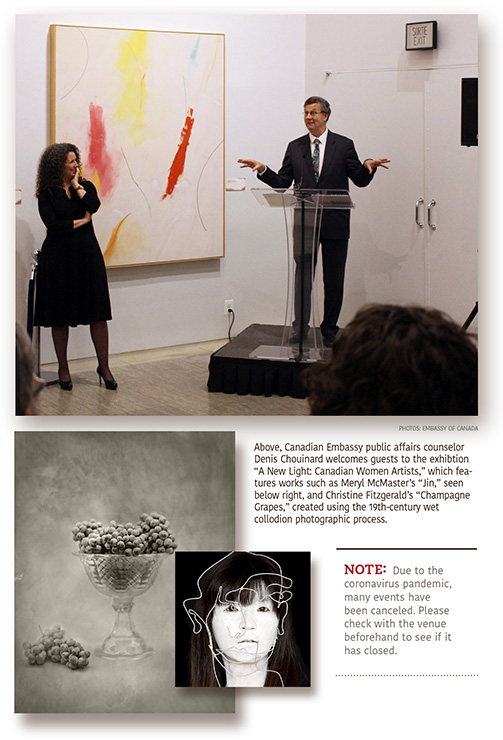 *NOTE: Because of the coronavirus pandemic, many events have been canceled. Please check with the venue beforehand to see if it has closed.

The Canadian Embassy is highlighting the work of 27 acclaimed female Canadian artists in the exhibition “A New Light: Canadian Women Artists,” located at the embassy’s art gallery until April 30. However, the art isn’t going anywhere.

Organizers wanted to “have all of these artworks visible, open and accessible to the general public because after the exhibit closes within three months, it will go on the walls on each of the six floors of the embassy,” public affairs counselor Denis Chouinard told us.

The exhibition is part of a larger drive to showcase Canadian diversity at the embassy, which already boasts 180 pieces of art on display throughout the expansive chancery on Pennsylvania Avenue. But for 2020, the embassy embarked on a reorganization of its art collection to make it even more diverse while also supporting the government’s larger efforts to promote gender equality.

So, when staff noticed that two-thirds of the art in the embassy was made by men, “we thought it would be nice to reach out to be close to parity in terms of representation here at the embassy of men and female artists,” said Chouinard.

The 38 works in the exhibition are all from three important collections that regularly loan works to the embassy: Scotiabank, the Canada Council for the Arts and the Global Affairs Visual Art Collection, which consists of over 7,000 works in a range of media, such as painting, sculpture and fabric art, that circulates among Canadian missions and residences around the world.

While each of the 38 pieces featured here are unique, collectively they celebrate the “light” that comes from nature and abstraction. That “light” inspired the name of the exhibition, which is committed to “incorporating works which illuminate Canada’s diversity, both with regards to genres of media and their artists’ backgrounds,” said Michelle Mahoney, a media relations officer at the embassy.

Christine Fitzgerald, a photo-based artist in Ottawa, had three pieces from her collection titled “Diversity” chosen to be a part of the exhibition. “The pieces are fruit studies that celebrate the diversity of fruits and vegetables available today,” Fitzgerald told us.

“My motivation in creating the series was to experiment with forms, compositions and colors. I used the 19th-century wet-collodion photographic process, which requires daylight. The chemistry cannot ‘read’ all the colors of the light spectrum, [so] reds, oranges and yellows are developed as different tones of black,” Fitzgerald explained. “I also experimented with light — the absolute best light for this process is 11:30 a.m. outdoor on a clear day. My best studio is outside.”

In a sense, the Ottawa-based photographer is a prime example of how women’s contributions benefit not only the world of art, but also the larger political discussions of the day, such as the environment and climate change.

Since taking office in 2015, Canadian Prime Minister Justin Trudeau has sought to include those voices in his administration, touting himself as a proud feminist and pledging to combat gender violence and incorporate women into all aspects of government.

“The day Justin Trudeau was sworn in as Canada’s prime minister, he stood on Ottawa’s Parliament Hill flanked by the 15 women and 15 men he’d appointed to his cabinet,” wrote Katherine Laidlaw in a March 2019 article for The Atlantic. “A reporter asked him why he felt such a gender balance was important and Trudeau, pausing for only a beat, held his palms up to the sky as he replied, ‘Because it’s 2015.’ It was a sound bite heard around the world.”

While the article questioned whether Trudeau’s brand of feminism could really address the complexities of what gender parity entails in today’s world, at work, at home and in society more broadly, there is little doubt that the prime minister has made empowering women and girls a priority in his administration.

“Under Prime Minister Trudeau, the Canadian government was led by the first cabinet with gender parity in Canadian history, but less well known is how deeply this has influenced their work across many sectors,” according to Mahoney. 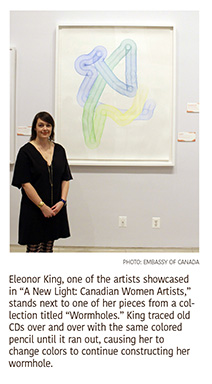 She said that “from the first federal budget that implemented gender budgeting; to our Feminist International Assistance Policy to ensure benefits for women and girls in our international development work; to our inclusion of gender chapters in recent trade agreements; to our pioneering Elsie Initiative in New York to encourage more women peacekeepers in U.N. operations — prioritizing efforts to ensure gender equity has permeated every aspect of the federal government’s work in recent years.”

One of the ways that the Canadian government has done this is through a process called gender-based analysis.

Katherine Baird, minister of congressional, public and intergovernmental relations at the embassy, explained the concept as “analyzing policy impacts on gender [both men and women], but also looking at the fact that we have multiple identities. So that intersectionality of our identities is as important when you’re trying to determine the impact of any sort of a policy decision — the impact economically; impact in terms of the family; impact in terms of opportunity. And so you see that permeating a lot of the government’s explicit policy objectives, which includes our foreign policy.”

However, there is still work to be done. Eleanor King, a Nova Scotia-born artist based in Brooklyn who is featured in “A New Light,” praised Canada’s efforts but said the world still lags behind in achieving true gender equality.

“I’d like to say that we are in a post-sexist time period but I don’t think that is true. I am very lucky to be well-supported in this community. There are systems in place in Canada to help you move forward if you are willing to work hard,” she said.

At the same time, women still face deeply entrenched societal obstacles to achieving success in all parts of their lives, especially when it comes to balancing work and family. “I think that it is tough, as a female, if you want to have a family. It seems like in order to be successful in your career, you can’t really have a family. I see colleagues who take time away from work to have a family and it negatively affects your work,” King said.

“I wish we didn’t have to have shows like this,” she added. “We shouldn’t need to have these exhibitions, but I am glad we have them. I hope it does encourage people of all kinds to continue to make their work and put it in the world. All voices need to be heard in the world.”

Diana Oxner is an editorial intern at The Washington Diplomat.