Home The Washington Diplomat April 2020 Amid Racial Tensions and Police Brutality, Two Black Men Wait for Paradise in ‘Pass Over’ 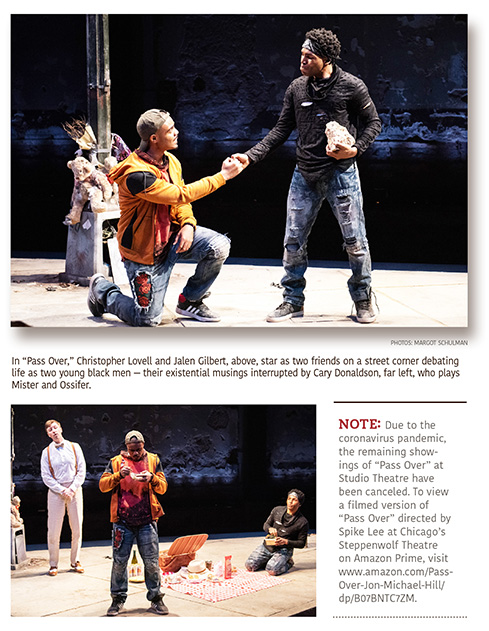 *NOTE: Due to the coronavirus pandemic, the remaining showings of “Pass Over” at Studio Theatre have been canceled. To view a filmed version of “Pass Over” directed by Spike Lee at Chicago’s Steppenwolf Theatre on Amazon Prime, visit https://www.amazon.com/Pass-Over-Jon-Michael-Hill/dp/B07BNTC7ZM.

Antoinette Nwandu, the author of “Pass Over,” is the epitome of gutsy. Not only did she give up her 9-to-5 paycheck to take a chance on becoming a playwright, but one of her early scripts is a powerful sucker punch that doesn’t discriminate in challenging both whites and blacks about preconceived notions of race.

The production — which recently had its D.C. premiere at The Studio Theatre, where it was directed by Psalmayene 24 — deals head-on with the hot topic but unfortunate crisis of white police brutality against young African American men.

With only three actors (one of whom plays two parts) and a sparse, darkened set denoting a decaying urban landscape, Nwandu demonstrates the concept that “less is more.”

The play starts with Moses, an African American man, waking with a scream from a fitful sleep while slouched against a lone street lamp — the site where his brother was gunned down by a white cop and is now decorated with withered flowers and an aging teddy bear. A siren is heard in the background and gets menacingly louder. Moses then begins a familiar and slangy back-and-forth exchange with his buddy, Kitch, who is also African American — a conversation they seemingly have regularly. Their banter is rapid, at times humorous, at times sad and longing, and full of the N-word.

“You’re my nigger,” Kitch continuously tells Moses in a declaration of loyalty and fleeting hope. “Kill me now,” he shouts. “Bang Bang!” Kitch responds, making light of their daily terrors.

Their lonely block is the solitary location for the play, as well as their lives. Their only goal — one they keep revisiting over and over again without any viable plans — is to leave this street corner to “pass over” to a better place, where they don’t have to fear for their lives by being black and vulnerable. This quandary is blatantly apparent when with every loud noise, both men duck and cover.

The play has been rightfully described as a cross between the dystopian “Waiting for Godot” by Samuel Beckett — where two men spend the length of the play waiting for the mysterious Godot, who never shows — and the Exodus story, where our Biblical ancestors passed over into the promised land. Here, the two young men painfully wax poetic about “the promised land” — they even play their made-up game “promised land top 10,” where they name their top 10 wishes once they leave their block — but inevitably they never make it. The latter is not surprising; the means in which they don’t make it are shocking.

The fact that Nwandu can tackle a subject — in this case police brutality in the era of Black Lives Matter — that has become so ubiquitous and deliver it with a fresh perspective is a tribute to her skill at dialogue, characterization and plot twists.

Tensions are ramped up when the men are met with a prim, Caucasian gentleman named Mister, toting a picnic basket, who claims he has lost his way en route to his ill mother’s house, not unlike Little Red Riding Hood who encounters the wolf. The audience waits with trepidation of what will come.

Nwandu ingeniously uses stereotypes to her advantage. By making all of her characters stereotypes, at least in part, she forces audience members to question their assumptions about race, and ultimately cringe in their seats. Mister, a clear geek who peppers his speech with “Gosh, Golly and Gee,” is oblivious to the reason Moses and Kitch distrust him and wonders naively why the men use the N-word so freely with each other, when not in anger. When the men tell him “it isn’t safe out here,” he says, “Call the police!”

Moses and Kitch, for their part, assume the presumably harmless white man deep down wants to call them the N-word and loudly gasp when he introduces himself as “Mister,” which could be mistaken for “Master,” even after he quickly explains that’s just his surname. Later, when Moses and Kitch celebrate a small victory against a white cop, they do an impromptu dance and sing “Movin on Up,” the theme song from the old sitcom “The Jeffersons,” which stereotyped African Americans as wannabes in a white world.

The white actor returns as the long-expected violent police officer, or “Ossifer.” In uniform and wielding a gun, he orders the unarmed Moses and Kitch to put their hands behind their heads for the apparent crime of “living while black.” The men know the drill and automatically comply with self-degrading responses.

The acting in the show is strong and played with conviction. Christopher Lovell is the alpha-male Moses who has big, but fantasized, dreams with which he inspires Kitch. Jalen Gilbert, as Kitch, tries to cheer up Moses with dance antics, songs and jokes. Together they are convincing as close, devoted friends and deliver Nwandu’s comic and serious lines with equal fervor.

Cary Donaldson as Mister/Ossifer is bigger-than-life, which serves his symbolic roles in the men’s lives.

In the end, the play poses more questions than answers. But it could be the playwright’s answer to the numbness we’ve succumbed to from sitting through the endless news stories, public outcries and, all too often, subsequent police acquittals. With “Pass Over,” Nwandu refuses to let us ignore it any longer.