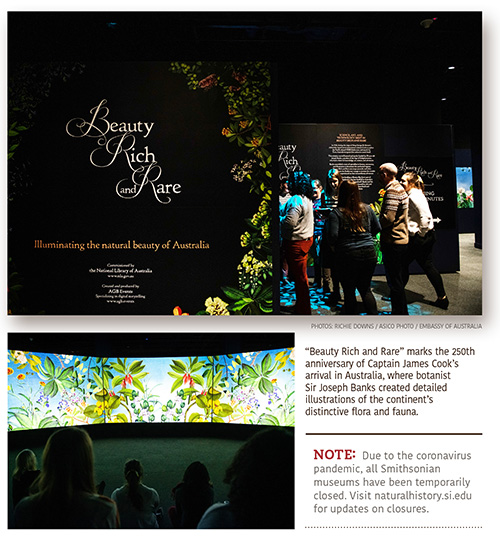 *NOTE: Due to the coronavirus pandemic, all Smithsonian museums have been temporarily closed. Please visit naturalhistory.si.edu for updates on closures.

A bright orange poster is the first thing visitors see before entering “Beauty Rich and Rare” at the Smithsonian National Museum of Natural History.

“Would you like to assist victims of the devastating bushfires in Australia? Please visit https://usa.embassy.gov.au and select News,” the sign says.

It’s a stark reminder of the months of devastating wildfires that ravaged Australia and killed more than 1 billion animals across the continent (also see cover profile).

Thus, “Beauty Rich and Rare” is both an enlightening window into the flora and fauna that are unique to Australia — one of the most biodiverse countries in the world — and a sad reminder that the continent also has the world’s highest rate of mammal extinction.

Climate change, which is making the continent’s wildfire seasons more frequent and ferocious, is likely to accelerate that process. And because over 300 species are native to Australia, once they become extinct, they will be forever wiped off the planet.

So, while “Beauty Rich and Rare” had been in the works for years, the timing of its D.C. debut in January — just as the fires in Australia raged out of control — lent an added sense of appreciation for the country’s flora and fauna, and a newfound urgency to preserve it.

The immersive and visually stunning multi-channel video projection (which will be on view through July, so hopefully Washingtonians can catch it once museums in the area reopen) has toured around Australia and will continue to travel in the northern hemisphere over the next two years, said Bec Allen, the Embassy of Australia’s cultural affairs manager.

“2020 marks the 250th anniversary of Captain [James] Cook’s arrival at Botany Bay. Acclaimed botanist Sir Joseph Banks was aboard the Endeavour on this voyage and undertook the first European documentation of Australia’s rich flora and fauna. Many of the specimens he collected on this journey now reside in cultural institutions around the world, including the Smithsonian National Museum of Natural History,” Allen said in an email to The Washington Diplomat.

The 20-minute video uses maps, journals and gorgeous illustrations to showcase the continent’s distinctive flora and fauna. Although it highlights the voyage of Banks and the HMB Endeavour from England to Australia 250 years ago, the audio-visual display opens with a map made of stars to reference the continent’s indigenous peoples. It quickly moves to the central focus of the video, the 18th-century voyage of Cook, Banks and his team of scientists and illustrators as they explored the Pacific aboard Endeavour in their search for Terra Australis incognita (the unknown south land).

Sydney-based AGB Events uses a mix of sound, color and light to bring to life Cook’s 1770 expedition, which marked the first recorded European contact with the eastern coastline of Australia.

It’s beautiful and packed with fascinating details and history, but the video projection doesn’t quite stand alone as an exhibition. That’s really no surprise — in 2018, the National Library of Australia commissioned “Beauty Rich and Rare” for presentation alongside a major exhibition, “Cook and the Pacific.”

The video piece that’s here in D.C. still makes for a good reason to stop by the National Museum of Natural History (NMNH). Although there’s no major exhibition connected with it, the video is a fun excuse to go on a search of Australia-centric holdings in the museum after the 20-minute experience wraps.

“The Embassy of Australia and the NMNH have a long history of collaboration. The museum holds over 2,000 Australian objects/specimens, including the permanent Australian mammals display,” Allen said. “‘Beauty Rich and Rare’ was an opportunity for the museum to exhibit a technologically innovative piece that brings botanical specimens to life. The embassy will be partnering with the museum on public program activities throughout the life of the exhibit. We are also collaborating on ongoing repatriation efforts of human remains and secret/sacred objects.”

The display box of artifacts outside the immersive show is a bit of disappointment, but it does have a unique treasure within it. As the exhibition points out, the British Museum gave the Smithsonian over 350 specimens from the voyage. But all that’s shown here are four items — two illustrations and two historic specimens.

The exhibition quotes David Attenborough as saying that “no journey has brought back such treasures,” and it’s a misstep there’s not more documents to explore after the visual experience of “Beauty Rich and Rare.” Still, as Allen noted, what is on offer — an add-on by the NMNH — is special.

“The Embassy of Australia was thrilled to find out that the NMNH held, in particular, a banksia specimen — a flowering plant Joseph Bank’s named after himself. This specimen is on public display for the very first time in association with ‘Beauty Rich and Rare,’” Allen said.

The exhibition hints at the fragility of the landscape and allows visitors to step into the shoes of Banks and his team of European naturalists as they saw Australia for the first time.

In doing so, it reminds us of the responsibility we all have to protect Australia’s unique biodiversity. As shown in the exhibit, 93% of Australian flora and fauna is found only on the continent.

“Our island home requires exceptional protection strategies, which is a priority of the bushfire recovery effort,” Allen wrote. “‘Beauty Rich and Rare’ is also a timely reminder of the importance of institutions such as NMNH. The cataloguing and study of specimens enables scientists to examine the past in order to learn and protect the future. Never has that been more important for our generation and our children’s generation.”