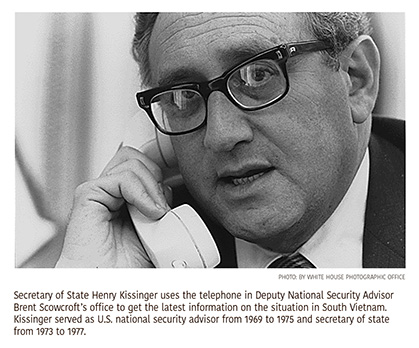 There is no shortage of discussion, analysis or self-expression when it comes to Henry Kissinger. The former U.S. national security advisor, secretary of state and diplomatic historian has been chronicled and analyzed in biographies and histories for nearly half a century. His own extensive writings include a three-volume memoir that extends for more than 3,800 pages.

So any new book related to Kissinger raises an obvious question: Is this book really necessary?

“Kissinger on Kissinger: Reflections on Diplomacy, Grand Strategy, and Leadership” is a valuable contribution to the Kissinger literature.  Assembled by Winston Lord, a former Kissinger aide and national security official, the book is based on a series of oral history interviews that Lord and another former Kissinger aide, K.T. McFarland, conducted with Kissinger several years ago.

“Kissinger on Kissinger” offers insights into the foreign policy challenges that Kissinger confronted while serving as national security advisor and then secretary of state from 1969 to 1977. While most of the book is an oral history, Kissinger also writes an introduction that provides a framework for understanding the organization of Richard Nixon’s foreign policy and the administration’s strategy pertaining to China, the Soviet Union, Vietnam and the Middle East. The book concludes with Kissinger’s reflections on diplomacy.

Kissinger says he barely knew Richard Nixon when he began working for him after Nixon won the 1968 presidential election. In fact, Kissinger had served for many years as an aide to Nelson Rockefeller, one of Nixon’s chief rivals in the Republican Party.

Nixon’s approach to foreign policy was strategic and bold, according to Kissinger. Nixon sought to build a grand strategy rather than careening from issue to issue. Kissinger says the president’s “operating principle was, you pay the same price for doing something halfway as for doing it completely. So if you do something, you might as well do it completely. You don’t really have a choice to do it halfway.”

Kissinger says that Nixon formulated his foreign policy by carefully studying written materials rather than by actively participating in vigorous policy debates. In meetings with his National Security Council, Nixon liked to first review detailed background papers and then listen to cabinet officials and senior staffers discuss the issues. “He liked to absorb it and think about it and then deliver his decision in writing almost like a Supreme Court justice,” Kissinger says.

The most dramatic foreign policy initiative during Nixon’s presidency was his trip to China in 1972 and the re-opening of U.S.-Sino relations after decades without official contact.

Kissinger says that he and Nixon decided that an American approach to China was warranted. “I was thinking of China as a road to balance the Soviet Union. He was thinking that if you build an international system, China had to be in it. It’s not a significant difference. It’s just what our experiences had been. We both decided very early that we would make an effort to get into a dialogue with China,” Kissinger recalls.

He adds that Nixon’s “view was that by getting China involved in the international system, the whole pattern of international politics would be transformed, because all other countries would then have to consider the impact of China in terms of the new dispensation.”

American and Chinese officials began informal contacts with Pakistan serving as the conduit. The United States and China sent each other five messages through this channel over two years. China’s missives were handwritten and delivered by messenger from Beijing to Islamabad and then to Washington, D.C. The U.S. responded with typed messages that had no letterhead.  Kissinger notes that “it took weeks for each exchange, and each exchange on each side was no more than four or five sentences. So each exchange, in a way, was precious. Each exchange was sort of a maneuver,” Kissinger recalls.

Kissinger took a secret trip to China in July of 1971 but did not know what would be accomplished “because all we agreed was that each side would present its views.”  Kissinger’s chief interlocutor was China’s foreign minister, Zhou Enlai, and they engaged in lengthy philosophical discussions about the structure of the international system. Zhou finally indicated that China would be receptive to a visit by Nixon.

Kissinger returned to China several months later to prepare for Nixon’s visit, which occurred in February of 1972. During his preparatory trip in October, Kissinger and Zhou negotiated the Shanghai Communique that was to be released at the summit’s conclusion. China’s top leader, Mao Zedong, insisted the communique begin by citing the areas of disagreements between the two nations and then shift to areas of agreement. “There has never been a diplomatic document that was drafted in this manner or had that structure,” Kissinger says, adding that he came to appreciate the Chinese approach as both creative and constructive.

According to Kissinger, Nixon hoped to visit the Soviet Union before the China trip, but his visit to Moscow was delayed because of U.S.- Soviet disagreements related to Germany. Some American foreign policy experts feared that Nixon’s overtures to China would imperil the relationship with the Soviets. But Soviet officials became more solicitous of the United States after the Americans began dealing with China. Nixon traveled to Moscow in May of 1972 and secured a number of significant agreements with the Soviets including the SALT and the ABM arms control accords.

Kissinger insists that he and Nixon always had a clear-eyed understanding of the Soviet Union despite criticism from conservatives in the United States. “The central debate was this: our critics took the position that Russia was an inherently evil state, and they had to be defeated in the Cold War, and that any negotiation with Russia was granting them a moral equivalence and thereby strengthening them in their aggressive maneuvers around the world, and that the culmination of the Cold War had to be some kind of overall diplomatic confrontation or war.”

Kissinger says that he and Nixon were determined to take a firm line against the Soviets “but at the same time, to ease the confrontation to the extent compatible with our principles to reduce the dangers of nuclear war.”

“Kissinger on Kissinger” includes an extensive section on how the Nixon administration sought to end the U.S. war in Vietnam. Kissinger recalls that when Nixon took office in January of 1969, the U.S. had 500,000 troops in South Vietnam and had suffered more than 30,000 casualties. He says the administration considered three options: total and immediate American withdrawal; a gradual withdrawal of American troops while strengthening the army of South Vietnam, the so-called Vietnamization strategy; and offering a peace proposal and then, if this were rejected, intensifying American military operations in Southeast Asia. He says Nixon opted for the Vietnamization strategy.

“Our view was that we wanted to give the South Vietnamese a decent opportunity to survive…. We had in mind something like how South Korea evolved after the Korean war,” Kissinger says.

He contends that the agreement the Nixon administration reached with North Vietnam was solid and even “exceeded expectations” but was never given a chance to be implemented because the Watergate scandal “so undermined presidential authority that the radical view in Congress became ascendant.” Congress, according to Kissinger, insisted on terminating American funding of the war in Vietnam. “So we lost the capacity to enforce the agreement…. The Congress voted us out of the war basically when it prohibited the use of any American forces in, over, or near Vietnam, and cut off all aid to Cambodia. That was the end of it.”

Kissinger argues that domestic tensions in the United States over the Vietnam War ushered in a contentious and polarized period in American life. “Let’s remember, the cult of violence in domestic debate really emerged in this form during the Vietnam War. Before then, of course, there were big disagreements between Democrats and Republicans, but the proposition that the government was a bunch of criminal liars who were committing war crimes emerged only at this violent stage.”

The most interesting feature of the book is Kissinger’s observations about diplomacy.

He reflects on the challenge of formulating policy when government officials only have sketchy information. “Much of the web of decisions is based on conjecture. You have to make an assessment you cannot prove correct when you make it. You will only know it in retrospect…. But as a general proposition, by the time you know all the facts, it is too late to affect them. So the art is to make your judgment at a moment when you have enough facts to be able to interpret what will turn out the correct way, not so soon that you overthrow everything, and no so late that you are stagnating.”

Kissinger argues that strategic and successful diplomatic efforts should begin by leaders posing basic questions such as: What are we trying to do here? What is the purpose of this exercise? He says it’s essential to tackle fundamental questions before shifting to tactics or technical details. “We always tried to focus on where we were trying to come out.”

Kissinger says the conventional approach to negotiating is for diplomats to state their maximum objectives and then make concessions as they seek to secure an agreement. However, Kissinger argues the problem with what he calls “salami tactics” is that “you never know when you have reached the end, and everything becomes a test of strength and endurance.” Kissinger’s preferred approach was to outline his basic objectives “maybe plus 5%,” explain them carefully to his interlocutors and try to forge a conceptual understanding.

“Kissinger on Kissinger” is valuable in several respects.

Above all, it reminds us how a strategic foreign policy should be developed by asking fundamental questions and then analyzing them with a carefully organized process of review and debate. Thoughtfully drafted background papers with clearly articulated options should serve as the foundation of disciplined debate and rigorous decision making.

This book is also a valuable reminder of the complex foreign policy challenges that confronted the United States and the world during the Cold War. It reveals how the Nixon administration tried to balance and leverage American relations with China and the Soviet Union while also dealing with vexing challenges in the Middle East, Southeast Asia and on Capitol Hill.

John T. Shaw is a contributing writer for The Washington Diplomat and director of the Paul Simon Public Policy Institute at Southern Illinois University.