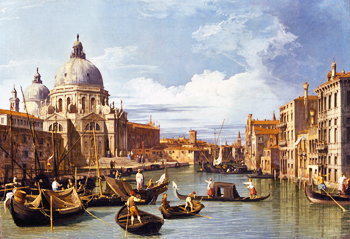 When the British ambassador to the Venetian Republic, Charles Montagu, was received at the famed Doge’s Palace on Sept. 22, 1707, the grandiose festivity marking the occasion did little to impress him.

Montagu, who had come for a second term to coax the republic to side with Britain against the French and Spanish, wrote that the Venetian government was “an outward show, and their neutrality has been suffered … knowing that they are not in a condition of being serviceable in any manner.”

Once a great European power and center of international trade, Venice in the early 18th century was in the midst of a long, gradual decline that began in the late 1500s and ended in 1797 with its surrender to Napoleon. But as its military and political power waned, the city of islands rising out of an emerald lagoon on the Adriatic would elevate itself on the world stage for its unparalleled beauty. And so this city on the water became famous for its festivals and extravagant lifestyle, a playground for aristocrats on the British Grand Tour throughout Europe and a magnet for tourists from across the continent.

The National Gallery of Art showcases 20 of Venetian artist Canaletto’s finest works, including “The Entrance to the Grand Canal, looking West, with Santa Maria della Salute”.

This growing demand inspired artists to produce vedute, or view paintings, which depicted Venice in stunning detail from diverse angles — and in great numbers during the 1700s. But these were more than scenic 18th-century postcards — they became enduring artistic achievements. And though many painters competed to satisfy the tastes of their wealthy patrons, and at a good price, one of them stood out for sheer artistic merit: Giovanni Antonio Canal, more famously known as Canaletto.

The National Gallery of Art, no stranger to major exhibitions of Italian art, having hosted more than 80 since opening in 1941, is the sole U.S. venue for a show featuring some 20 of Canaletto’s finest works, in addition to more than 30 additional view paintings by his contemporaries.

“Venice: Canaletto and His Rivals” forms the centerpiece of a program of Italy-themed cultural offerings at the National Gallery of Art through May 30. The lectures, film series and culinary showcases are all part of the broader “La Dolce DC” Italian cultural festival marking the 150th anniversary of the Risorgimento, or resurgence: the national unification movement that in 1861 led to the proclamation of the Kingdom of Italy (no matter that Rome and the Veneto were not yet included).

In addition to the Canaletto show, other events tied to La Dolce DC include “Philip Guston, Roma” at the Phillips Collection (see related story) and Gaetano Donizetti’s “Don Pasquale” by the Washington National Opera. In addition, Destination DC, the city’s tourism marketing arm, is also highlighting the city’s Italian connections through specialized walks and hotel packages.

The Canaletto exhibition was put together by the London-based vedute scholar and art dealer Charles Beddington, in cooperation with the National Gallery in London, where it was shown until mid-January, and the National Gallery of Art in Washington. It brings together one of the finest groups of 18th-century view paintings ever assembled, Beddington said, and is one of very few such exhibitions on this theme outside of Italy.

“With view paintings, as with so many things, there’s a world of difference between the great and the merely good,” Beddington said at the exhibition’s press preview. “And a remarkably high percentage of the paintings in this show are truly great.” If the viewer doesn’t enjoy or at least admire these paintings, he said, “I’m afraid 18th-century view painting is not going to be your thing.”

Because the exhibition can be appreciated on several different levels, however, it is likely to appeal to a variety of different interests. For one, it serves as a visual history lesson of Venice’s pageantry, from regattas down the Grand Canal to ornate diplomatic receptions on the Molo — the stone quay marked by two granite columns that led into the Piazza San Marco and was once the ceremonial landing spot for great officials and distinguished visitors. These iconic visions of the city define the “multifaceted richness of the Venetian way of life,” as Italian Ambassador Giulio Terzi di Sant’Agata put it.

One such painting is Giovanni Battista Cimaroli’s “The Piazza San Marco with the Populace Chasing Bulls in Celebration of the Visit of Friedrich Christian of Saxony, 16 February 1740.” While present day mores and safety considerations preclude this type of activity, the artist’s meticulous execution gives a sense of the animated energy inspired by Venice’s own version of the running of the bulls.

For those seeking a more artistic bent, the show offers the opportunity to compare view paintings of widely varying styles, from the precise to the painterly, as well as different subject matter, from grand festivals, to harbor scenes, to intimate portraits of forgotten corners of the city. The 20 Canaletto works, drawn from collections across Europe and the United States, provide sufficient depth to examine the artist’s stylistic development, influenced, ultimately, by the tastes of patrons such as British consul Joseph Smith (who wanted sunny scenes on canvases small enough to ship back to England).

Finally, the imposing 19th-century gondola that greets visitors at the entrance to the show — all 35 feet of it — brought to Long Island by the American artist Thomas Moran, is sure to ignite memories for those who have been to Venice, and kindle a desire to go for those who haven’t yet been.

As curator Beddington said, the show’s breadth “provides an exercise in connoisseurship.” In addition, it “introduces artists who hopefully deserve to be known better, while at the same time enhancing, if anything, the status of the presiding genius, Canaletto himself.”

Venice: Canaletto and His Rivals
through May 30

National Gallery of Art
on the National Mall between 3rd and 9th Streets at Constitution Avenue, NW