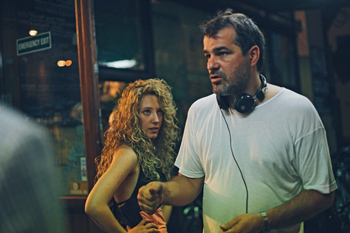 Hungarian writer-director Kornél Mundruczó presented his sixth feature, “White God,” to critical and audience acclaim at the 2015 Sundance Film Festival. A mountain of buzz surrounded the Hungarian production’s unorthodox tale, primarily told from the perspective of a canine protagonist. Hagen leads other undesirable mixed-breed dogs in a shocking rebellion against abusive humans in his quest to return to his 13-year-old owner. The action-packed thriller is an intelligent allegory about minorities being increasingly oppressed by the majorities in Hungarian and greater European societies.

“I would like to reflect my society as much as I can. Of course, it’s a fairytale, so it’s not as black and white if you are there in Budapest as it is in my movie. I would like to re-flect our society as more and more extreme. Our political situation is more and more ex-treme. The intolerance is strong. Even the chauvinism is strong,” said Mundruczó, whose soft-spoken, pleasant demeanor starkly contrasts with the angry, rude characters predominant in “White God.”

“It’s like in a war, especially if you wanted to go for democracy and go for freedom…. This movie is a metaphor … about minorities and reflecting the majority,” he added, citing, among the minorities in Hungary, “Gypsies, poor people, even gays, intellectuals, liberals.”

Asked if the majority of his country is conservative, he responded emphatically: “Ex-actly! And more and more extreme. I really try to criticize as much as I can.

“The funny thing is that I was really reflecting my own society. But I recognized, espe-cially in Cannes, that Europe is more extreme. Paris is not so far from Budapest any more. We are really problematic in how we handle minorities everywhere.”

Mundruczó hypothesized about the origins of the far-right extremism that he sees sweeping Europe: “In my eyes, there was the economic crisis [in 2008]. It changed the world but especially Europe. After the crisis … came a huge moral crisis, and old soci-ety loaded by lots of fear, existentialist fear. They don’t want to face anything … deal with anything. This is really a huge base for nationalism.

“So Hungary nowadays is a quite nationalistic country, which is sad,” the director con-tinued. “Not every Eastern European country is like that. This is … politically quite ex-treme: very populist, very right-wing. This is an answer [to] the fear surrounding soci-ety. On the one hand, I can quite understand it. But the result, I’m totally against it. It’s always contradictions.”

Not surprisingly, the filmmaker says the response to his film in Hungary has been quite divided. “With the right-wing press, they really cannot watch, in this way, themselves. But we had a great audience, very big,” he said. “It gives me a lot of hope, so I was really happy.” 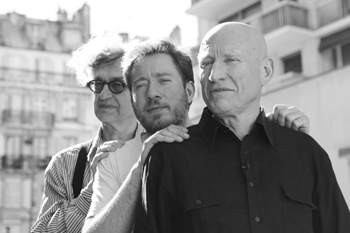 From left, Wim Wenders, Juliano Ribeiro Salgado and Sebastião Salgado bring the latter’s photography to life in the documentary “The Salt of the Earth.”

The Washington Diplomat had the pleasure of speaking with the filmmakers in Manhattan, where MoMA was hosting a retrospective of films by Wenders. Asked about the process of thinking about photography versus film, he responded, “I don’t think I would have dared getting involved with a film about a photographer if I hadn’t known already that this man — who I had already encountered for a couple of months and became friends with — was a great storyteller. If I hadn’t known that, I don’t think I would have dared to enter the territory of a movie because photos in a film need protection.

“Without protection they become a slideshow,” Wenders explained. “My own photogra-pher friends have always refused to have them on a screen because I think they lose something. That’s why I liked them as prints or in a book. But on a screen it’s difficult; I feel as if they’re strangely naked. I only got involved in this adventure with Juliano real-izing Sebastião himself was the answer — and the wealth of his stories and his eco-nomic, political, sociological, psychological knowledge of all the places he went to. That was going to make it possible to make a film.”

Juliano Salgado agreed. “That’s what we shared, actually, when we started. It was the idea that we were not going to make a film of the photographer, but one of the great wit-nesses of the last 40 years — someone who had lived so much, had so much to pass on. You could see the photos in the exhibitions, in the press a lot, in books, but no one knew about all those stories and all those things Sebastião saw. It was really important that we could share this with a much broader audience than just the friends and the family. There was something important to pass on. That’s what we believed. That’s how we started.”

“Yeah, it’s the knowledge that leads him to take these photographs and to share this process of getting involved with all these people and their situations,” Wenders ob-served. “Sebastião has this uncanny ability to become part of the humanity he’s witness-ing. And I was, of course, very curious how is that possible because I saw something in his photographs that I didn’t see in any other photographs. I saw an empathy, and I saw an ‘immersement.’ I wanted to understand that. I finally found out it’s time.

“This man spends more time with these people, and he spends more time to prepare himself. Then when he goes there, he doesn’t take the next plane out because it’s un-comfortable. He stays and lives with these people under their conditions. He eats … he shares the same food. He stays, and he comes back. He sometimes comes back countless times because he feels he’s made friends, and he can’t abandon them. He has a different implication. For me, that was a huge discovery,” Wenders told us.

The director concluded, “It was also a slow realization that I only had a right to make a film about this man if I did the same — if I applied his own rules. That meant I had to spend three and a half years with him and his son in order to have a right to make this movie.”

For more information and a complete schedule, please visit www.dcenvironmentalfilmfest.org.