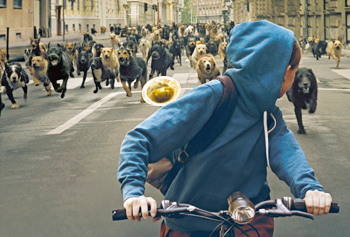 Also See: ‘Kumiko, the Treasure Hunter’ and ‘Salt of the Earth‘ and Repertory Notes

Zsófia Psotta portrays a 13-year-old Hungarian girl whose dog is kicked to the curb by her father, and by society, in “White God.”

The 2015 Sundance Film Festival’s Spectrum section showcased “White God,” a fascinating Hungarian movie from writer-director Kornél Mundruczó (“Delta,” “Tender Son: The Frankenstein Project”). One of the most unusual selections playing in Park City, Utah, the gripping drama depicts a mixed-breed dog as the main character. But “White God” is not your typical cuddly fido flick.

Co-written by Mundruczó, Viktória Petrányi and Kata Webér, the allegorical screenplay represents the cultural clashes fueled by the rising tide of reactionary political and social forces sweeping across contemporary Hungary and Europe in general. More frequently than not, these extreme conservative movements proclaim intolerance of opposing viewpoints — say, progressive politicians and thinkers — as well as ethnic, religious, lower-class and other minorities.

When her mother leaves for Australia on an extended work assignment, 13-year-old Lili (Zsófia Psotta) must move in with her never-do-well father Daniel (Sándor Zsótér), who lives in a bleak apartment building in Budapest. Lili’s adored dog Hagen is not permitted to stay because her father refuses to buy the expensive license that the government requires for mixed-breed dogs. Such mongrels serve as a metaphor for the “impure” groups of people that society’s traditional demographics may consider undesirable.

A meddling neighbor reports Hagen, bringing the authorities to their door. In search of Lili, the dog make his way to her orchestra rehearsal, creating a ruckus that infuriates the conductor. After her father picks her up, he breaks her heart by angrily throwing the unwanted mutt out of their car. Dogcatchers capture the stray and lock him in a stark animal control facility.

A shady visitor to the pound takes Hagen, who is trained to battle in deadly dogfights. The formerly meek, obedient house pet transforms into a fierce warrior. Soon enough, hardened Hagen learns to rebel against his evil masters. He escapes and frees other “unfit” dogs from their cages, leading them throughout the streets of Budapest to violently revolt against their human masters. Hagen eventually finds his way back to Lili, to whom he remains loyal.

On a surface level, “White God” unspools as an exciting action flick that bleeds into the exploitation horror genre. It thrillingly portrays how humans frequently and systematically abuse dogs, even though they have long been known as man’s best friends. Admittedly, the film’s explicit cruelty is not easy to watch. Director of photography Marcell Rév artfully shoots the stylish scenes, including the unique canine point of view. Mundruczó’s steady pacing supports the palpable tension that he creates. Yet some scenes drag a bit, so the nearly two-hour final cut would have benefited from tighter editing.

As the leading lady of “Kumiko, the Treasure Hunter,” Japanese actress Rinko Kikuchi (Academy Award-nominated for “Babel”) is a pleasure to watch, which is a very good thing since she appears in nearly every scene. She must rely on her facial expressions and body movements to effectively portray Kumiko, who has sparse Japanese dialogue and does not speak English. Evoking a silent movie star, Kikuchi’s largely non-verbal performance charmingly depicts the adorable heroine’s blend of oblivious determination, innocence and melancholy.

In Tokyo, 29-year-old Kumiko leads a solitary life, enduring a deadening routine as an “office lady” for a large company. Her overbearing mother worries about Kumiko, mostly that she may be getting too old to marry and have children. At home, she does get some unconditional love from her rabbit Bunzo.

One day, Kumiko’s life changes forever when she discovers her purpose. She comes across an old VHS cassette of “Fargo,” which opens with titles that claim, “This is a true story.” Obsessed with the scene showing Steve Buscemi’s kidnapper burying the ransom in a frozen field, she embarks on an ill-conceived mission to dig up the hidden treasure, believing the film is actually a treasure map.

Kumiko buys a flight to Minneapolis, Minnesota — the nearest airport to Fargo, North Dakota — with her company’s credit card, which is subsequently canceled. Lacking funds, she hilariously struggles to make her way to Fargo but is unable to speak English with the quirky locals, whose friendly overtures she finds difficult to accept.

Entrancing ‘Salt of the Earth’ 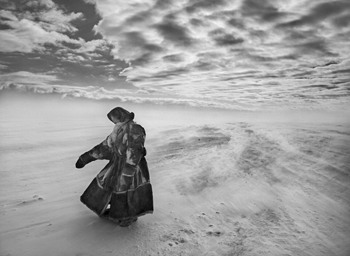 “The Salt of the Earth,” an entrancing documentary showcased in SXSW’s Festival Favorites, takes a revealing look at the life and career of legendary Brazilian-French photographer Sebastião Salgado. He is best known for his massive projects in black-and-white photojournalism, particularly in developing countries. His photographs are typically complex compositions full of rich details that are far better seen on the big screen, so do not miss your opportunity to catch the mesmerizing visual poem while it is playing in theaters.

Sebastião’s photographs are prized for more than their technical excellence. He is celebrated for elegantly depicting humanism and dignity in his subjects, even among those who have suffered the most — subjects he got to know well by living with them for extended periods. “The Salt of the Earth” ambitiously reviews Sebastião’s vast body of work from around the world. The documentary displays a curated selection of Sebastião’s most memorable pictures, successfully condensing a 40-year legacy into a feature-length running time of nearly two hours.

In the 1990s, Sebastião was burnt out as a photojournalist after covering the genocide in the Congo and Rwanda. Back on his family’s land in Brazil, he and his wife Leila started Instituto Terra to stem the deforestation of the local rainforest. His environmental efforts led him to refocus his photography on the natural world for his current “Genesis” project.

Though certainly powerful, the images may not always speak for themselves. When needed, Wenders and Juliano act as narrators who provide additional context that fleshes out the story. Sebastião’s commentary often accompanies his stills, serving as a sort of master class. The film starts off with Sebastião reflecting on his famous shots of the Serra Pelada mines in Brazil.

Wenders, who is himself a published still photographer, interviews Sebastião through an opaque mirror that displays projections of his photographs. The innovative technique permits the audience to see the master photographer commenting on images that can be viewed simultaneously, a big improvement over the standard talking heads that usually dominate documentaries.

Juliano’s involvement with the documentary provided the filmmakers with very intimate access, particularly since he accompanied Sebastião on his recent photography expeditions, including a trip to Siberia. Juliano’s work with his father may have benefited their complicated relationship. Sebastião’s long absences from home made him more of a mythical creature rather than a real patriarch. His wife was left by herself to manage the family’s domestic obligations, including raising their two sons, one with Down syndrome, largely without a resident father figure.

The National Gallery of Art co-hosts a variety of programs at venues around town. At AFI Silver: Concluding the “Discovering Georgian Cinema” series, director Nino Kirtadze presents two of his films, “The Pipeline Next Door” (April 13, 7 p.m.) and “Don’t Breathe” (April 14, 7 p.m.).

Presented with thanks to the Embassy of Poland, the program “Sound of My Soul: Wojciech Bąkowski – Spoken Movies and Other Animations” (April 4, 2:30 p.m.) boasts an appearance by Bąkowski, a Warsaw-based animator and video artist.

Manuel Mozos’s documentary “Others Will Love the Things I Have Loved: João Bénard da Costa” (April 18, 2:30 p.m.) is a unique cinematic and textual portrayal of da Costa, the entrenched director of Lisbon’s Cinemateca Portuguesa.

The eighth annual Festival of New Spanish Cinema (April 9-12) is programmed and produced by SPAIN arts & culture and Pragda.

Co-presented with the National Gallery of Art, the “Discovering Georgian Cinema” series closes with two free films directed by Nino Kirtadze, who appears in person: “The Pipeline Next Door” (April 13, 7 p.m.) and “Don’t Breathe” (April 14, 7 p.m.).