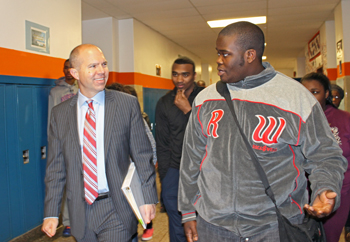 After years of marginal gains in test scores and flat enrollment, Mayor Vincent Gray and D.C. Schools Chancellor Kaya Henderson were able to say that the education reform that kicked off in 2007 seemed to be bearing fruit: Test scores in the 2012-13 school year jumped more than at any point since 2008, and even students in the city’s most troubled areas seemed to be picking up reading and math faster than before.

The feeling of rebirth wasn’t only evident in the classroom, though, but also in the buildings themselves: Gray and Henderson celebrated the re-opening of two of the city’s most historic high schools, both of which had either been fully rebuilt (Dunbar High School in Truxton Circle) or dramatically renovated (Cardozo Senior High School in Columbia Heights) — also see “Huge Modernization Campaign Transforms D.C. School System” in the November 2011 issue of The Washington Diplomat.

One man, though, was less impressed.

“It’s really quite shocking to have a dropout rate hovering around 40 percent and claim success; where half the children are not proficient and claim success. I think the celebration is premature,” said David Catania, a member of the D.C. Council and chair of its Committee on Education.

As education reform in D.C. passes the half-decade mark, Catania has become something of a one-man foil for Gray and Henderson, using his perch at the committee to aggressively question just how well the changes they are implementing are working.

Much of the oversight is overdue, he says. While the mayor was granted control of the schools in 2007 and two chancellors have unilaterally led reforms in what was once the country’s worst public school system, a stand-alone education committee in the city’s legislature wasn’t re-established until January 2013. In the intervening years, more and more students fled traditional public schools for charter schools, which now educate 43 percent of the city’s students.

David Catania, a member of the D.C. Council and chair of its Committee on Education, talks with students at Coolidge and Roosevelt Senior High Schools. In recent months, Catania has visited 58 schools, held hearings, introduced legislation, hosted town halls, and lambasted city officials for what Catania sees as premature optimism over the state of education reform in the city.

Since the committee’s leadership was handed to him, Catania, who was first elected to the D.C. Council in 1997 as a Republican and became an Independent in 2004, has worked at breakneck speed. He has visited 58 schools — both traditional public schools and charter schools — held oversight hearings, introduced legislation, hosted town halls in each of the city’s eight wards, and lambasted city officials when they expressed what Catania sees as premature optimism over the state of education reform. All of that, he says, has brought education to the forefront once again.

“I’m proud that public education is now front and center in the public dialogue in the city, something it wasn’t this time last year,” he told The Diplomat. “No one was talking about quality public education a year ago. We had passing conversations about test scores, but in terms of trying to embed in the whole community a consciousness of improving public education, this committee has resurrected the issue.”

Catania’s aggressive oversight has provoked under-the-breath grumbling from city and school officials who argue that he’s trying to micromanage education policy and practice. But Catania counters that he’s not looking to revisit the law that granted mayoral control over the schools, but rather make it more effective.

“I strongly support the ability of the mayor to hire the chancellor, so I’m not in favor of revisiting that subject. Nor am I in favor of a wholesale revisiting of governance generally. What’s important is that we select a system and stick with it and we make … prudent midstream adjustments to that system. Stability is important,” he said.

This year, Catania passed into law two of those adjustments. One law increases security during all-important annual standardized tests that help measure just how well — or not — D.C. public school students, teachers and administrators are doing. The high-stakes tests have provoked large-scale cheating scandals in places like Atlanta, while smaller incidents of cheating have popped up in a limited number of D.C. schools.

He also passed a law strengthening punishments for truancy. In pushing for the law, Catania pointed out that proficiency rates were lowest at the schools where students were absent the most. At Anacostia Senior High School in Ward 8, he pointed out that 45 percent of students missed more than 21 days of school in the 2011-12 school year, and the school’s math and reading proficiency hit a dismal 14.5 percent — among the lowest rates in D.C.

In June, Catania introduced seven new bills, including one that would raise per-pupil funding for low-income and struggling schools, another that would allow Henderson more tools to innovate in public schools and a third that would mandate the creation of a unified lottery system for placement in both traditional public schools and charter schools, which have grown much more quickly in recent years.

Other bills would help parents navigate the D.C. school system, find uses for the city’s vacant school buildings and, perhaps most controversially, institute a strong accountability system to encourage (or force, depending on point of view) underperforming schools to get their act together.

Catania has been criticized for rushing to overhaul the city’s school system without fully understanding the consequences of his proposed changes. Critics also say the reforms could erode traditional public education by favoring charter schools.

Catania says it’s high time to shake up the old system. He’s offering a significant funding boost to schools in poorer neighborhoods, but in return, they would have to meet measurable new performance targets. If they fail, they could be turned into “innovation schools,” unshackled from certain union and municipal rules (much like charters).

But the city would also have to come up with the extra money to fund Catania’s proposals — he suggests tapping into the city’s unexpected budget windfall of $40 million — and the issue will be fiercely debated this fall.

To his detractors, Catania says time is not on their side, warning that the city is on a death spiral as parents flock to suburban schools and the divide between the haves and have-nots grows deeper.

Catania reserves particular criticism for Gray, who he says lacks vision and a plan for education in the city. (Catania has been rumored as a potential mayoral contender in 2014, fueling critics that say he is grandstanding on education.) He also worries that many of his colleagues simply haven’t given the issue the attention it deserves, and that without a “Marshall Plan” for schools, other pressing issues will continue to dog the city.

“I don’t see a city organizing itself around the notion that anyone born here has a fighting chance for something more,” he said.

With all of these criticisms, it’d be easy to see Catania as a perpetual pessimist. He doesn’t see himself as one, but rather someone who believes in the mission of education reform but is frustrated by its slow pace. Though D.C. posted higher test scores in the last school year, he points out, the pace that they have grown means that D.C. won’t hit its stated goal of 75 percent proficiency for another two or three decades. Henderson wants to reach it by 2017, which Catania says is almost laughable.

In the next year, Catania says he plans to engage in the same active oversight that marked the committee’s first nine months. He also feels that the potential for success exists in the system, and pushing for further gains will require single-minded focus.

“Everything flows from a high-quality education system. It is the most efficient poverty-fighting tool ever invented. I’m of the view that education is the critical engine of opportunity, and to the extent we don’t have an underlying vision and plan to accompany that vision, we’re just cascading from one year to the next.”