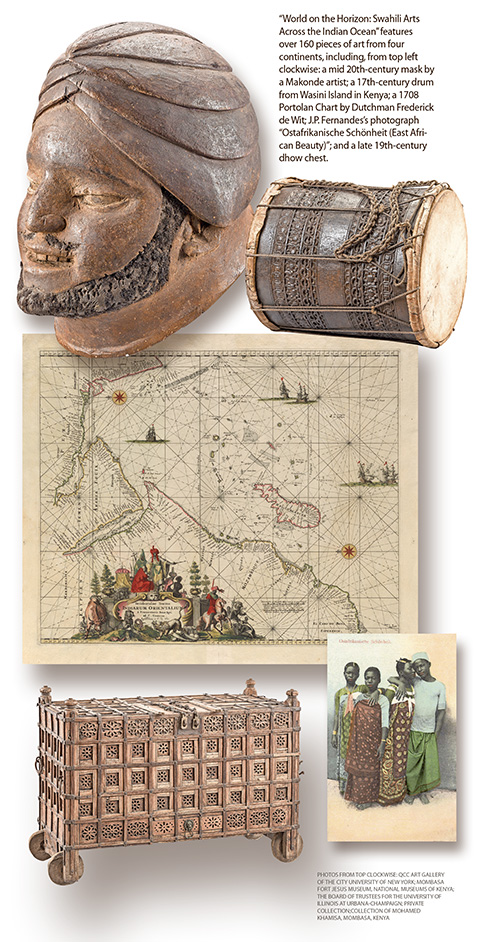 For centuries, the Swahili Coast, where East Africa meets the Indian Ocean, served as a gateway between Africa and the outside world. Merchants traded everything from gold and ivory to slaves from this 1,800-mile-long stretch of coastline, made up of the modern nations of Somalia, Kenya, Tanzania and Mozambique. The region quickly became a commercial crossroads that gave rise to communities with their own distinct culture, religion, language and economy.

It’s only fitting then that the new exhibition at the National Museum of African Art showcases the global exchanges that broke barriers between Africa and Asia in a space that physically connects the Smithsonian’s African and Asian art museums.

“World on the Horizon: Swahili Arts Across the Indian Ocean” highlights this key crossroads through an array of objects that reflect the expansive network of trade that developed along the Swahili Coast over a millennium. This commercial and cultural convergence shaped the region’s identity, as goods and people traveled vast distances, empires came and went, and connections were forged that endure to this day.

The exhibition is curated by Allyson Purpura, senior curator and curator of global African art at Krannert Art Museum in Illinois, and Prita Meier, assistant professor of art history at New York University.

Purpura said she was drawn to the Swahili Coast because of its diverse history. “For me personally, I’ve always been interested in areas and regions of the world where places are sort of formed by a confluence of cultures, a coming together of different peoples and perspectives,” she told us. “The East African coast is a wonderful space that brings together so many different cultures to create a unique place.”

The over 160 pieces of art on display from four continents attest to the broad reach of the Swahili Coast. The exhibit features pieces loaned from the National Museums of Kenya and the Bait Al Zubair Museum in Oman that will make their debut with North American audiences.

Purpura said the exhibit is a great reminder that people have complex, multilayered origins, reinforcing “the idea that we can look both far and close by for thinking about who we are in the world.”

The exhibit is organized by theme, with objects featured for both their artistic merit and historical relevance. There are stunning pieces of jewelry, carved doorposts and other intricately crafted pieces of furniture, sculptures, maps and even illuminated Korans, a reflection of the Islamic influence that dominated the coast.

These beautifully illuminated Korans are among Purpura’s favorites. “There’s a special love and attachment to the beauty of devotional practices of the coast and their connection with Islam,” said Purpura, who has published essays on topics such as Islamic charisma and piety in Zanzibar, as well as script and imagery in African art. “Their calligraphic style and ornamentation is uniquely Swahili. There’s also the use of language to decorate things—like the bicycle mud flaps on display—and to speak to people directly by using proverbs and riddles to communicate nuanced ideas; there are beautiful words written and encased in beautiful amulets.”

Purpura said the exhibit not only illustrates how cultures converged along the Swahili Coast, but also demonstrates Africa’s enduring impact on the wider Indian Ocean world. “They extend way across the Indian Ocean into the Atlantic,” she said. “Swahili culture is a window into seeing how Africa has contributed to aesthetic styles and preferences across the Indian Ocean.”

World on the Horizon: Swahili Arts Across the Indian Ocean