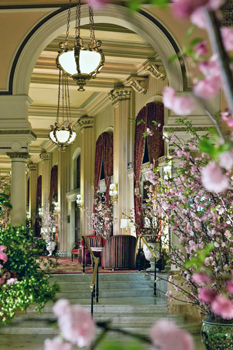 Washington, D.C., is fertile ground for international culture, but in the spring, one country’s influence rises above the rest. Japan’s fruitful gift of 3,000 cherry trees to the United States in 1912 has sparked more than a century of cultural goodwill and critical tourist dollars for the city.

This year’s National Cherry Blossom Festival runs from March 20 to April 13, with dozens of events celebrating the cherry blossoms that line the Tidal Basin. (Experts predict the trees will be in peak bloom between April 8 and 12.)

The spectacular burst of pink is certainly pretty to look at, but the blossoms are also big business for the area’s hotels, which roll out a slew of special packages, discounts and themed offerings to capitalize on the springtime extravaganza.

The flowers can also be seen in the lobby of the Willard InterContinental Washington hotel.

According to festival organizers, the delicate flowers provide a mighty economic boost to the city — estimated to be around $160 million. Organizers also predict this year’s festival will draw 1.6 million attendees.

That injection of money will be a welcome relief for local businesses after a punishing winter filled with snowstorms and polar vortex temperature plunges.

“After this winter, we’re all ready for spring,” said Elliott Ferguson, president and CEO of Destination DC, a nonprofit corporation of 850 businesses and organizations that supports the city’s travel and tourism sector.

To usher in the warmer weather, Destination DC and its members have put together more than 30 blossom-inspired hotel packages and getaways that showcase the grandeur of springtime in Washington.

The Beacon Hotel & Corporate Quarters and St. Gregory Luxury Hotel & Suites are both participating in the campaign. Hector J. Torres, vice president of Capital Hotels & Suites, which owns both properties, says the blossoms are a boon to area hotels.

“Our goal is always to complement the cherry blossom experience,” Torres told The Diplomat. “The hospitality industry dons their best every year — always thankful for a gift that keeps on giving.”

But he adds that the blossoms are about more than money. They are an intrinsic part of the city’s character — a breathtaking sight that makes him thankful and proud to be a Washingtonian. (He says he doesn’t even mind all the traffic they generate on his daily commute along the Tidal Basin.)

“The Cherry Blossom Festival is and has been for decades the signature event of the year for Washington, D.C. [It] is literally synonymous with our city, and no other branding for D.C. has ever taken such prominence,” Torres said. “So many family traditions and memories have been built around this event. Our city has welcomed millions upon millions of guests, and few events capture the imagination of so many Americans. It is an event that lends itself to creativity, and one we always take pride in participating.”

To that end, both the Beacon and St. Gregory are offering a 2014 Cherry Blossom Package through April that ranges from $159 to $249 a night and includes full American breakfast for two, half off valet parking, a 15 percent dining discount and free welcome drink.

The blossoms inspire a variety of cocktails at hotels across town. The Beacon and St. Gregory are featuring an entire menu of drinks, ranging from the “Spring Cherry Rickey” — made of Bulleit Bourbon and fresh sour cherry juice with a candied kumquat — to the decadent “Chocolate-Covered Cherries,” made with Godiva and Effen Black Cherry Vodka. Guests can sip on the refreshing concoctions while soaking in the spring air at the Sky Bar Lounge atop the Beacon’s rooftop, which officially opens April 16 and offers sweeping views of the city. 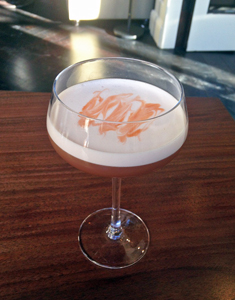 The Yoshino 1935 cocktail at the St. Regis Bar is one of many cherry blossom-inspired drinks on tap at area hotels in April.

Meanwhile, at the Ritz-Carlton on 22nd Street, the smell of cherry blossoms is in the air — literally — thanks to a signature scent custom-made for the hotel. Sakura, which means cherry blossom in Japanese, features notes of bergamot, black currant, vanilla and white musk as well as floral hints of jasmine, lily of the valley and of course cherry blossoms. The scent will waft through the hotel in the form of candles, oil diffusers and room sprays.

The Ritz is also offering cherry-themed drinks and dishes, along with a “Cherry Blossom Give-a-Tree” package for $399 a night that includes a traditional Japanese pastry, breakfast for two, overnight parking and the National Cherry Blossom Give-A-Tree Card, showcasing the official artwork of the festival. The National Arbor Day Foundation will plant a tree in a national forest for every card that is given.

But perhaps no other property in D.C. immerses itself in the blossom experience quite like the Willard InterContinental Washington does, transforming its stately lobby into a pink oasis of flowers.

The Willard, which hosted Japan’s first-ever delegation to the United States in 1860, highlights that history with a stunning blossom display and a Cherry Blossom Afternoon Tea in the Peacock Alley. For $48 a person (or $59 with cherry Champagne), guests can savor tea and sweets by pastry chef Gary O’Hanlon as well as Japanese-inspired savories by executive chef Luc Dendievel — accompanied by the soothing sounds of Koto, a traditional Japanese harp-like instrument.

In addition, Willard guests can enjoy exclusive docent-led tours of the Arthur M. Sackler Gallery for the exhibit “Chigusa and the Art of Tea,” which recreates the Japanese practice of formalized tea presentation known as chanoyu.

Curious about other customs, like how to wear a kimono or make sushi? The Willard’s “Cherry Blossom In the Know Concierge” will be on hand to assist guests with Japan-related experiences.

The Willard is one of several hidden gems around town where you can admire the blossoms away from the hoards of tourists thronging the Tidal Basin. According to Destination DC, small clusters of trees can also be found along the National Mall, just northwest of the Lincoln Memorial and around the Washington Monument. Other off-the-radar blossom trees can be found at the U.S. National Arboretum, Anacostia Park, Stanton Park and Oxon Run Park.

The pastel pink-and-white flowers themselves are relatively fleeting — they’re at their peak for only a few days — but the city stretches out the festivities to make the most of their appearance. The festival features more than three weeks of activities, many of them free and family-friendly, including the Blossom Kite Festival (March 29), the Southwest Waterfront Fireworks Festival (April 5) and the National Cherry Blossom Festival Parade and Sakura Matsuri Japanese street fair (April 12).

But Ferguson of Destination DC urges visitors to go beyond the blossoms and experience all that the city has to offer — from an exhibit at the National Gallery of Art on the real-life Monuments Men who saved art treasures from the Nazis, to the Washington Nationals baseball team’s opening day, to the “World Stages” theater festival at the Kennedy Center.

“Walking beneath the famous cherry blossoms around the Tidal Basin is a bucket-list experience for many travelers, but there are multitudes of only-in-D.C. experiences running concurrently with the festival that make D.C. an ideal spring break destination,” he said. “Visit a cache of European art saved in World War II by the division known as the Monuments Men, take in some of the 20 plays during a major international theater festival and indulge in a memorable meal on the patio of one of our fine restaurants. Finding a hotel room is key to having all these experiences on your doorstep, and that’s easy.”