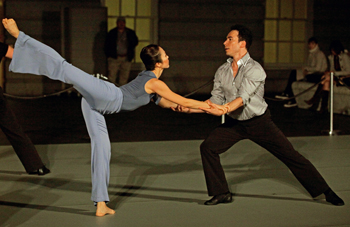 “Homage” featured a soundtrack of interviews and music associated with important figures in American dance as part of the “Dancing the Dream” exhibit.

Dana Tai Soon Burgess, a New Mexico native who often dissects his Asian-American roots in his dances, has become the Smithsonian’s first choreographer-in-residence and was commissioned by the Portrait Gallery to create a site-specific work in April in conjunction with the “Dancing the Dream” exhibit.

“It is an honor to be the first resident choreographer at the National Portrait Gallery. My newest work will speak to where we are currently in the field of dance,” Burgess told us.

Last fall, he debuted the piece “Homage” that featured a soundtrack of interviews and music associated with important figures in American dance such as John Travolta and Shirley Temple Black, who recently passed away. On April 19, he’ll present a new piece inspired by early modern dance masters and contemporary movement trends. To get a sneak peek, visitors can check out the open rehearsals that will be held in the museum galleries on March 22, 29, April 5, 12 and 14.

“I am looking forward to seeing our dance supporters at the National Portrait Gallery. It is a joy to have people watch our rehearsals and then see how the work evolves into a complete performance,” Burgess said, adding that the museum itself has shaped his work.

“The collection and space are quite an inspiration. I love being outside the traditional dance studio, up close to our audiences.”

“Dancing the Dream” — along with “Diaghilev and the Ballets Russes, 1909-29: When Art Danced with Music,” an earlier exhibition of dance history at the National Gallery of Art — also inspired two new works that Dana Tai Soon Burgess Dance Company presented at the Kennedy Center in February.

That performance delved into the cross-cultural influences and tensions that have been a hallmark of the company’s thought-provoking artistry. “Leaving Pusan” traced the story of Burgess’s great-grandmother’s decision to leave Korea in 1903 to begin a new life on the plantations of Hawaii, while “Khaybet” stemmed from the choreographer’s tour of northern Pakistan — one of many overseas visits Burgess has made (also see “All the World’s a Stage for Burgess and Washington Ballet Dancers” in the October 2011 issue of The Washington Diplomat).

The son of an Irish-Scottish-German-American father from upstate New York and a Korean-American mother, Burgess has brought on board dancers with similarly eclectic backgrounds. He’s also served for 16 years as a State Department cultural ambassador, traveling with his company to Chile, Ecuador, Egypt, India, Israel, the West Bank, Jordan, Korea, Latvia, Mexico, Mongolia, Pakistan, Panama, Peru and Venezuela, among other places.

His passport is set to get a few more stamps. Burgess is scheduled to tour the British Virgin Islands shortly and Suriname in September on behalf of the State Department.

Anna Gawel is the managing editor for The Washington Diplomat.