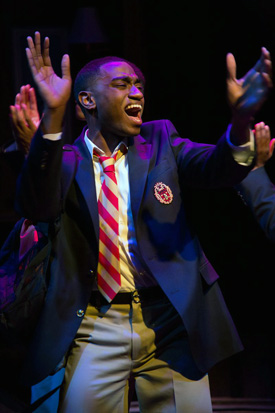 Jelani Alladin stars as Pharus Young, an earnest, vocally talented young man struggling to fit into an elite, regimented boys’ school where his sexuality is an issue in “Choir Boy” at Studio Theatre.

The playwright merely plops his protagonist, a closeted, effeminate black teenager, in the midst of an elite, conservative boy’s prep school and sits back to watch the drama unfold. Unfortunately for the play’s characters, there are no clear winners or losers. Fortunately for the audience, this same ambiguity challenges us to think again when trying to define morality.

Likely drawing on his own experience as a gay black male from the South, McCraney gives us Pharus Young, an earnest, enthusiastic, articulate and vocally talented young man struggling to fit into a regimented, academic environment where his sexual preference is an issue.

The story takes place at the fictitious Charles R. Drew Prep, an all-male, historically black boarding school that’s heavily steeped in tradition, hierarchy, financial politics and promises of molding boys into accomplished black men. It is here where Pharus is told to ignore a gay slur in order to take his place as head of the school’s legendary gospel choir. Although he refuses to tattle on the offender, citing the school’s honor code, Pharus uses his power as choir lead to kick out the affronting student from the gospel group.

Similar to McCraney’s previous plays, such as the acclaimed trilogy “The Brother/Sister Plays” and “Head of Passes,” “Choir Boy” explores the intersection of culture and history. But unlike his earlier works, known for their heavy-handed mannerisms, “Choir Boy” is less stylistic and more spontaneous, although no less poetic.

The script doesn’t throw any punches; its message is direct. On the Studio’s intimate stage, only five boys, a headmaster and a teacher represent the entire school. Designer Jason Sherwood’s set — stately columns and headshots of historical African American male leaders — is minimal and functional. The plot line — what you’d expect from a tale of tensions in the isolated bubble of a boarding school — keeps up at a steady clip thanks to Kent Gash’s direction.

But then something unexpected and magical happens, which is perhaps why McCraney has racked up a slew of awards and nominations at the ripe age of 34. McCraney bends our reality; he makes a gutsy move with a great emotional payoff. With no fanfare, in silence and low lighting, the students undress and individually step into steamy showers. Through this simple act, placed when the plot’s tension is peaking, McCraney draws away the curtain of preppy formalities and bares these boys’ inner worlds. Showing them engaged in a self-comforting, mundane, private act levels their playing field but makes them immensely more defenseless.

Acting out these scenarios are a group of thespians all new to the Studio Theatre and all great finds, for both their acting and singing abilities.

Jelani Alladin portrays a multifaceted Pharus, confident and self-aware of his talents, yet vulnerable to outside and internal pressures that make him feel he must somehow navigate his troubled waters alone. Alladin seems completely natural in his role and does a fine job of communicating the simplicity of childhood overlain with fears of the future, with a dash of put-on diva.

Jaysen Wright, who plays Pharus’ sympathetic roommate A.J., stands out as the closest thing to a confidante that Pharus has, and lends some needed comic relief. He’s laid back enough to tease Pharus about his sexuality and emotionally strong enough to comfort him when he most needs it. 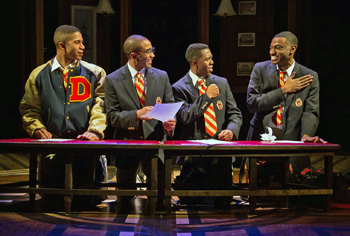 “Who you saving all that for?” Pharus asks A.J. (referring to A.J.’s toned muscles apparent in a T-shirt and briefs).

“Jesus,” Pharus answers, to which A.J. quips, “I don’t think Jesus is interested.”

The rest of the characters that round out the cast are more caricature, which isn’t necessarily negative. How we experience them in this world is how Pharus perceives them, which is all we really need to know.

McCraney’s use of a rich, inspirational a cappella score helps to make this challenging script more palatable for both Pharus and the audience. Like Pharus, we let the music, wonderfully orchestrated by Music Director Darius Smith, wash over and heal us, even when the songs are mournful and their relief is fleeting.

The music — some of which is contemporary and sure to please D.C. audiences — also serves to pacify the onstage conflict, interweaving the five distinct voices’ melodies and harmonies, as they stand as one.

The world McCraney portrays in “Choir Boy” is a small, insulated one. It doesn’t deal with or mention the many other newsworthy topics today for African American males like Ferguson or Trayvon Martin, or even President Obama (although his photo is displayed).

“There’s no part of me that wants to write a play specifically about those incidents,” McCraney said in an interview with Metro Weekly. “They are actual and biographical and biography isn’t what I do.”

What McCraney does with “Choir Boy” is give us reality encased in realistic fiction. Pharus doesn’t have to really exist to be real. We all know a Pharus. How do we feel about him? The answer to this question is all the reality we need.