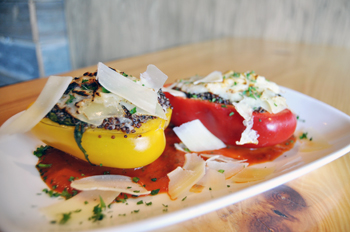 TSecond State features farm-to-table Pennsylvania-themed fare such as the red quinoa-stuffed peppers with mushrooms and spinach.

Located on the block made famous (or infamous depending on your perspective) by the local watering hole Sign of the Whale, the Mighty Pint recently closed up shop and ditched its frat-boy look for a suit and tie.

Gardner looked homeward for the inspiration behind his newest restaurant venture in the D.C. metro area (two more are pending for early in 2015). A native of Altoona, Penn., Gardner pays homage to his home state, the second to ratify the U.S. Constitution (hence the restaurant’s name), by featuring a variety of seasonal, farm-to-table American dishes with a Pennsylvania twist.

Gardner’s frequent design collaborator Maggie O’Neill of SwatchRoom has brilliantly transformed the formerly den-like space into a coolly elegant but surprisingly cozy spot. Exposed red brick, dark woods, Tudor beams and black-and-white floor tiles have been replaced with a palette of soft grays, metal blues and tans. The slick gray concrete floor mirrors the exposed silver ductworks. The wood is bleached pale, and glass and metal fixtures give off subtle but warm lighting that is reflected in the gleaming gray granite bar top. A few historical pieces lend understated thematic interest to the textured blank walls. While O’Neill has teamed up with Gardner before, this is by far the most striking of her designs.

If the transformation of the space has been dramatic, the change to the menu is no less so. Almost all vestiges of the Mighty Pint’s bar have been purged from the menu (though the spicy popcorn that arrives at the table is a variation on the theme). Second State did, however, keep the cheese and potato pierogies, a staple of Pittsburgh Steelers game night. Prepared traditionally and topped with sautéed onions, they are a perfect rendition of the Polish classic brought to Pennsylvania by Polish immigrants in the latter half of the 19th century who came to work in Pittsburgh’s flourishing steel industry.

Gardner brought on the team that helped establish Copperwood to develop Second State. Chef Allan Javery, a graduate of the French Culinary Institute in New York City, served in kitchens in New York and D.C. under renowned chefs including Nobu Matsuhisa and Alain Ducasse before joining Gardner’s Wooden Nickel team. He has developed a menu that capitalizes on locally available ingredients (he tries to source fresh ingredients as much as possible from within three hours of D.C.) with an emphasis on Pennsylvania products.

The dishes are mostly straightforward, protein-centric American fare and feature local game and meats, farm-raised wild fowl and poultry, as well as fish. Venison, bison, pheasant, duck and trout all appear on the menu, a nod to the hunting and fishing tradition in Pennsylvania.

Perhaps in a nod to the state’s earliest inhabitants, many of the game preparations bear echoes of Native American traditions. The venison, tender and not at all gamey, is rubbed with coffee and cocoa, grilled and served with blackberry compote. Lean ground bison is made into meatballs with garlic and onions and served with huckleberry gravy, while the pheasant is pan roasted with pearl onions, apples and a cider jus. Finally, a tea-smoked duck breast is roasted and served with poached pears and blueberry jus. Perhaps it is not so surprising that the movement toward local sourcing of seasonal ingredients in some ways approximates the conditions under which Native Americans cooked, before government surplus food and widespread poaching drastically altered their traditional diets. 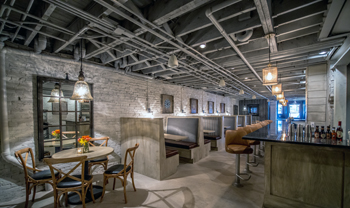 Another standout is the maple-brined double-cut pork chop, which Javery grills in ancho-chili rub and serves over fruit chutney. He uses Ossabaw pork, a rare heritage breed from Ossabaw Island, Georgia, that is descended from the pigs left behind on the island by Spanish explorers in the 16th century. Ossabaw pork has a more complex flavor and tender texture than domesticated pork (and possibly healthier fat — the research on this is ongoing), which Javery preserves with his simple preparation.

Here and there Javery’s classical training peeks through to delicious effect. Short ribs, braised with root beer, are served atop a silken parsnip and garlic confit puree. The scallops and foie gras small plate is decidedly continental. Lightly smoked, the seared East Coast scallops are drizzled with a balsamic reduction and served on a slice of foie gras resting in a pool of sweet corn puree. Meanwhile, the swordfish, expertly grilled to avoid drying out, is prepared in an almost Mediterranean style with a salty dried tomato and Kalamata olive relish.

Second State serves main dishes a la carte, but the menu offers an interesting variety of family-style sides. Mashed potatoes are prepared with smoked Gouda; crimini mushrooms are sautéed with butter and brown ale; and baked beans are cooked with root beer and bacon. The Brussels sprouts, fried and mixed with crispy shallots, bacon and maple-mustard vinaigrette, are delicious but almost too greasy to eat. The ghost of the Mighty Pint would be happy to see you can still get fries here, and get them you should. Double fried and seasoned with garlic and parsley, they are light and not greasy. Accompanied by smoked tomato ketchup and truffle aioli for dipping, they might even tempt back fans of the old bar menu.

On the other hand, dessert is somewhat of an afterthought at Second State. A brownie with house-made Nutella ice cream is simple but satisfying. There are also a few pie selections from the Acme Pie Co. in Arlington, Va., where baker Sol Schott shares Gardner’s focus on culinary handicraft and makes only a few types of pies at any one time that use local ingredients whenever possible. Recent choices have been pecan and shoofly pie, a classic Pennsylvania Dutch molasses pie.

The menu also features half a dozen Pennsylvania craft beers on tap as well as a few bottled varieties. Rye whiskies also feature prominently, with over 30 white and dark varieties (including a few from Pennsylvania). A boutique collection of 64 wines by the bottle and more than a dozen by the glass round everything out.

And, of course, there is root beer. Whether in the food or at the bar, no restaurant dedicated to Pennsylvania would be complete without it. Hires Root Beer was introduced as a commercial product at the 1876 Philadelphia Centennial exhibition by Charles Hires of Philadelphia, who had begun marketing his version of the drink as a medicinal beverage after it was introduced as a substitute for beer in early days of the Prohibition movement in Pennsylvania. It is likely that credit is owed to Native Americans who taught Europeans how to make it in the first place.

The Mighty Pint was beloved by Pittsburgh Steelers fans who for five years gathered on game nights to watch, drink and eat plates of the bar’s famed pierogies. In rebranding the concept for the location, Gardner continued his transition away from the party bar business that was once the hallmark of the Wooden Nickel Bar Company, to a more serious and upscale food-focused brand, reflecting perhaps the changes in his own personal tastes. Though sports fans may have been displaced, if the crowds on recent weeknight visits (in bad weather) are any indication, the neighborhood was just as ready for a change as Gardner apparently was.

Reservations: Accepted and suggested as the space is small