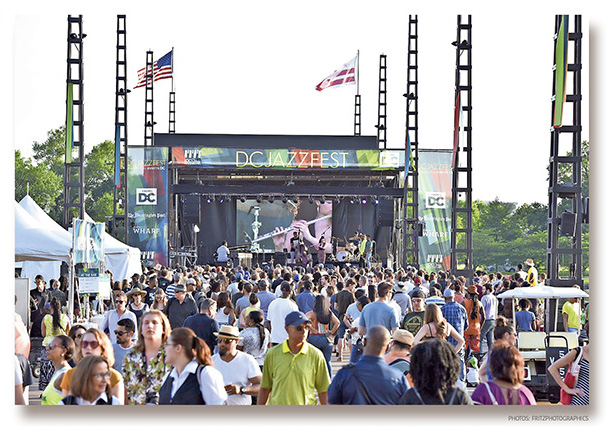 Jazz originated in the African American communities of New Orleans but quickly spread to became a global sensation, inspiring international offshoots ranging from Afro-Cuban jazz to acid jazz in the U.K.

So it’s only fitting that the 15th edition of the DC Jazz Festival celebrates both the local roots of this distinctly American art form as well as its enduring influence around the world. To that end, the popular festival presented by Events DC has teamed up with the embassies of Finland, Australia, Denmark, South Africa, Italy, Russia, Luxembourg and Canada, among others, to showcase a broad array of international talent.

In fact, the festival’s opening ceremony will be held on June 6 at the residence of the ambassador of Denmark, a country that Sunny Sumter, executive director of the D.C. Jazz Festival, says has an amazing jazz scene right now. Stefon Harris and Sharón Clark will be featured at the event. A special segment of the festival, the Charles Fishman Embassy Series, will be devoted entirely to exploring how jazz has evolved into a global musical phenomenon.

In all, there will be 160 shows throughout the festival featuring some 300 artists from the U.S. and around the world planned for 40 venues in 22 neighborhoods around the city. Last year, a record-setting 110,000 people attended the citywide jazz extravaganza.

“Jazz is such a thriving art form right now,” Sumter told us. “It’s being taught at both the high school and college level and there are so many great musicians making careers out of music.”

The roster of DC JazzFest artists ranges from 14-year-old José Andre Montanho, a blind pianist from Bolivia; to up-and-coming innovators such as the Texas-bred/New York-based quasi-collective known as Snarky Puppy; to established veterans who have been performing for decades.

Sumter encourages Washingtonians to experience this diverse lineup that will take place in every quadrant of the city and cater to a broad range of audiences, from the novice to the expert.

For instance, there will Jazz ‘N Families Fun Days at the Phillips Collection along with special date night events. Meanwhile, the Jazz in the ‘Hoods series is a partnership with local clubs, restaurants, hotels, galleries, places of worship and performing arts spaces to celebrate and honor jazz in the nation’s capital. Among the eclectic venues are the Anacostia Playhouse; Bistro Lepic & Wine Bar; Kenilworth Aquatic Gardens; Howard Theatre; the Kennedy Center; Madams Organ; Rumba Café; Sixth & I Historic Synagogue; and local mainstays Blues Alley and Twins Jazz. The series will illustrate not only the vitality of jazz, but also the vibrancy of D.C. as a constantly evolving and eclectic cultural hub.

Other highlights include: an event honoring the great masters of jazz hosted by Nick Cannon at the Kennedy Center Concert Hall; the Anat Cohen Quartet at Hamilton Live; the Chuck Brown Band at the Gateway DC Pavilion; the Capitol Hill Jazz Jam at Mr. Henry’s; Louisiana-born Jordon Dixon at the University of the District of Columbia JAZZAlive; Etienne Charles Creole Soul at City Winery DC; and Chris Potter exploring the Billy Strayhorn Collection at the Library of Congress.

Many of the performances will take place at The Wharf, the city’s newest development complex that is home to restaurants, shops and a major concert venue along the Southwest Waterfront.

The finals of the DC JazzPrix annual international band competition will be held there on June 15 at Pearl Street Warehouse. That weekend, The Wharf will also serve as a stage for an array of international talent such as Yannick Rieu of Canada; Cinema Italia; Danish bassist Anee Mette Iversen; and the Olli Soikkeli Trio of Finland. As part of the festival’s marquee weekend, the international artists will perform at one of three outdoor stages and an indoor stage at The Anthem.

The festival took place at Yards Park in the Southeast neighborhood of Capitol Riverfront for four years but eventually outgrew the space, choosing The Wharf as its new home. The festival is currently in a five-year partnership with the burgeoning neighborhood.

“The Wharf is brilliantly constructed and designed,” Sumter said. “The piers offer a great experience for us to have music stages — we have a floating stage, too.”

With The Anthem, the festival will utilize the 6,000-seat warehouse-chic venue for indoor performances.

Sumter was a traveling jazz musician herself who has experienced the power of music to bridge cultural and political differences. She traveled to Moscow and St. Petersburg without knowing anything about the Russian language. Artists prepared her music in advance and when she arrived in the country, she said “it was like we were best friends.”

“It was such a fantastic experience. I still hold it with me this very day,” Sumter said. “Some of the greatest ways we can communicate every day is around music and culture. It really speaks to the whole spirit of diplomacy and our own humanity to be able to reach across what may be our divides and find our common ground.”

Sumter calls herself a fan of jazz singer Abbey Lincoln, a civil rights activist who passed away in 2010. She also loves the “Great American Songbook,” the canon of some of the most seminal American jazz standards from the early 20th century that includes pieces like “Love Is Here to Stay.” Sumter noted that John Coltrane’s “My Favorite Things” is still one of her favorite songs to sing.

Another key player who has made the festival such a success is Artistic Director Willard Jenkins. Jenkins helps set the tone for the festival in terms of themes and artists represented. He also books the talent.

Jenkins works on the ongoing, year-round Embassy Series program, named after the festival’s founder, Charles Fishman, who was the personal manager and producer of jazz legend Dizzy Gillespie.

June 7 to 16
throughout Washington, D.C.
www.dcjazzfest.org