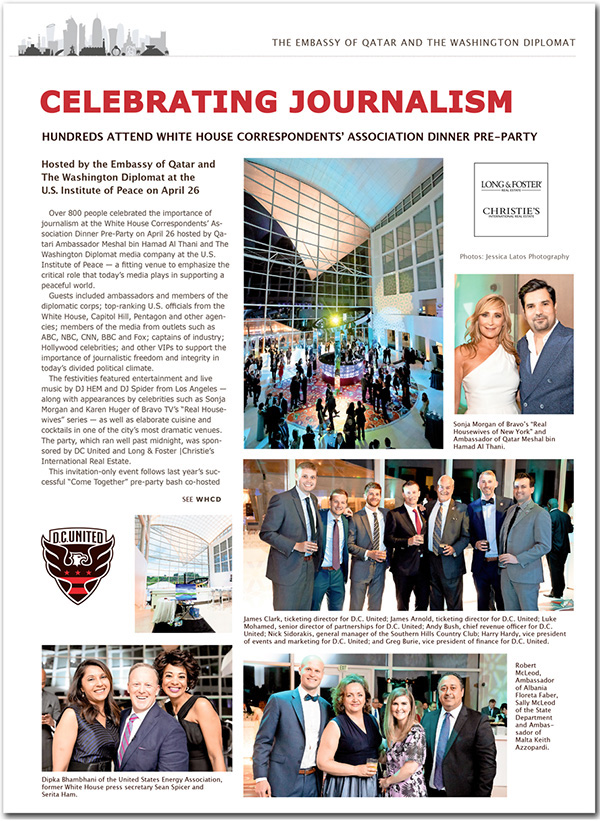 Over 800 people celebrated the importance of journalism at the White House Correspondents’ Association Dinner Pre-Party on April 26 hosted by Qatari Ambassador Meshal bin Hamad Al Thani and The Washington Diplomat media company at the U.S. Institute of Peace — a fitting venue to emphasize the critical role that today’s media plays in supporting a peaceful world.

Guests included ambassadors and members of the diplomatic corps; top-ranking U.S. officials from the White House, Capitol Hill, Pentagon and other agencies; members of the media from outlets such as ABC, NBC, CNN, BBC and Fox; captains of industry; Hollywood celebrities; and other VIPs to support the importance of journalistic freedom and integrity in today’s divided political climate.

The festivities featured entertainment and live music by DJ HEM and DJ Spider from Los Angeles — along with appearances by celebrities such as Sonja Morgan and Karen Huger of Bravo TV’s “Real Housewives” series — as well as elaborate cuisine and cocktails in one of the city’s most dramatic venues. The party, which ran well past midnight, was sponsored by DC United and Long & Foster |Christie’s International Real Estate.

An independent monthly publication and media company with a readership of more than 200,000, The Washington Diplomat has served for 25 years as the flagship newspaper of the diplomatic and international community in Washington D.C., and New York. It is the only publication distributed to all 185 foreign embassies in the nation’s capital, as well as the World Bank, the IMF, the IDB, lawmakers on Capitol Hill, the White House, the Pentagon, the State Department, various Fortune 500 companies, federal agencies, think tanks and various points of influence in Washington, Virginia, Maryland and New York.