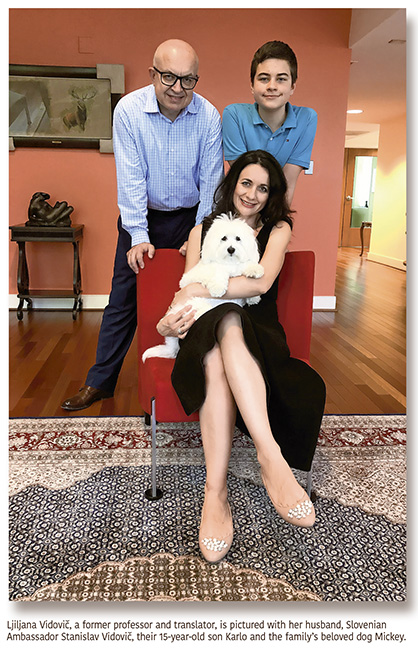 She is fun. She is positive. She is authentic. And according to her admirers, she radiates a refreshing brand of all three attributes, which can at times be hard to find in Washington’s stuffy, protocol-laden world of diplomacy.

“I like everybody. I am honest. I can’t pretend,” said Ljiljana Vidovič, wife of Stanislav Vidovič, Slovenia’s ambassador to the U.S.

Her husband, who has an equally carefree, down-to-earth sense of humor, was attracted by her authenticity, too. “When I first met her in Brussels,” he recalled, “there was never any hidden agenda with her.”

Besides her husband of 15 years, her number-one diplomatic fan and sidekick is Indira Gumarova, wife of Czech Ambassador Hynek Kmoníček. The two have teamed up for a series of fashion shows in D.C. to showcase designs from their native countries and promote the power of fashion diplomacy (also see related story in the Luxury Living section).

“Washington, D.C., is often more about titles than personalities,” Indira surmised. “Yet, you need your own circle of authentic people. Here comes Ljiljana who knows how to live without pretension. It is important to have real people around you if you live for real.”

Born and raised in Karlovac, Croatia, a city close to the capital of Zagreb, Ljiljana graduated from the University of Zagreb with a focus on English and German languages and literature. After her studies, she worked as a professor and translator. She speaks Slovene, English, German, Croatian, Slovak and French, plus a bit of Danish and some Italian.

“I continued my career in diplomacy in Brussels, where I met my husband in 2001,” she said.

At the time, Stanislav Vidovič was deputy head of Slovenia’s mission to NATO. He later headed the NATO Unit and the Security Policy Department at the Ministry of Foreign Affairs, eventually rising to secretary-general before coming to Washington. He also previously served a stint as ambassador to Slovakia.

During our interview with Ljiljana, her husband — who lived the first part of his life in what was then communist Yugoslavia — left the office to stop by their self-described “home above the store.” Slovenia’s residence is just an elevator ride above the contemporary embassy on California Street in the swank Kalorama section of Northwest Washington.

I asked the ambassador if he still meets many Americans who get Slovenia and Slovakia confused. “More people know the difference now,” he said, appreciating the irony of his previous assignment as Slovenia’s ambassador to Slovakia from 2009 to 2013.

Along with her husband, there was someone else with us for the whole interview: Mickey, their beloved Malagasy Coton de Tulear, a white snowball of a little dog. Hypoallergenic and continually happy, this canine companion not only goes everywhere with the family, he also accompanies the ambassador to his office, attending meetings and “sitting” in on interviews, obviously.

Although Ljiljana has been careful to keep their 15-year-old son Karlo out of the diplomatic spotlight, he was encouraged to come in and say hello. Karlo is now in the 10th grade and already speaks several languages like his parents. Since he went to the British School in Slovakia, his English is impeccable with no foreign accent or pitch pattern.

Slovenia — the only country with “love” in its name, which has become a tourist slogan — is a popular tourism destination thanks to its picturesque capital Ljubljana and abundance of mountains and lakes, including the famous Lake Bled. But Slovenia has also distinguished itself as a leading advocate of sustainable living and is now promoting “sustainable tourism” as part of its emphasis on green well being.

The connection is a natural fit: At just under 8,000 square miles, Slovenia constitutes less than 0.4 percent of the Earth’s surface yet is home to 2 percent of all land-based species.

On that note, the ambassador wants everyone to know that Slovenia is called the heart and soul of beekeeping in Europe. “We are the only EU member state to have protected its native bee, the Carniolan gray bee. Two hundred thousand Slovenians have their own beehives.”

In Slovenia, beehives are covered with colorful panels and drawings depicting various folk stories, examples of which were on display at the embassy for the European Union Open House showcase in May. In addition, “Honey breakfasts” are held in kindergartens and elementary schools throughout the country to introduce the importance of bees to the next generation.

In fact, Slovenia, along with other countries, has proposed for the U.N. to declare May 20 as World Bee Day. It would be an important reminder of the importance of bees, which have experienced a dramatic decline in recent years — part of an overall climate change-fueled loss of biodiversity that the U.N. estimates could trigger the extinction of 1 million species. The collapse of bee colonies in particular could cause widespread agricultural losses, because crops are pollinated by honey bees, which in turn could result in significant economic repercussions.

“Slovenia hopes to raise awareness of how important bees and other pollinators are for the survival of planet Earth and survival of the human race itself,” Stanislav said.

“We are also the only country that guarantees, in our constitution, fresh drinking water as a right to its citizens,” the ambassador proudly added, reciting that constitutional pledge: “As a priority and in a sustainable manner, water resources shall be used to supply the population with drinking water and water for household use and … shall not be a market commodity.”

Ljiljana is especially proud of Slovenia’s culinary scene. One of the country’s self-taught chefs, Ana Roš, was named the best female chef in the world in 2017 by Restaurant magazine. Her Netflix documentary, “Chef’s Table,” has become a cult hit. Besides her restaurant, Hisa Franko, she is also a well-known sports and travel enthusiast.

Many Slovenes share her love of nature activities. About the size of Massachusetts, Slovenia is 60 percent forest.

“We have everything,” Stanislav told us. “For instance, in June you can ski in the morning, fish mid-day and swim in the sea in the afternoon. Slovenians are crazy about sports. Everybody does something. Nature and sports are a big part of Slovene life.” 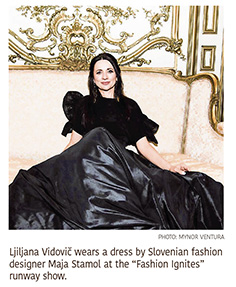 The ambassador runs several mornings a week and is an avid fly fisherman. “At home, we ‘catch and release’ [the fish] to support the sustainability of the environment. I love to lean down and drink the water. It is so clear. We have 2.1 million citizens and 100,000 belong to Alpine clubs. We have hiking trails to old towns and valleys. If you hike for two hours, you have to eat … and, we are one of the most important sustainable food destinations in the world.”

Another way Slovenians protect the environment is through an elaborate recycling program. “We have seven different trash bins,” Ljiljana explained. “If you throw the wrong thing in the wrong bin, you’ll get a ticket.”

“We are the hidden jewel of Europe,” she added. “We have been all over the internet and travel magazines. We have a natural beauty with mountains and beaches and caves. We are about a three-hour drive from Venice and a four-hour drive from Vienna…. We have many festivals. In the summer every day there is something.”

Ljiljana herself loves to cook healthy food. Her thrill in Slovenia is going to the huge outdoor city market on a daily basis. “I get fresh fish, vegetables, cheeses and eggs. We even go in the winter; the vendors have gas heaters.”

In Washington, she walks to the Dupont Circle Farmers Market, not far from the embassy, but only on Sunday mornings. “It is so small in comparison to what we have at home every day,” she lamented.

Nevertheless, Ljiljana said she has relished experiencing Washington’s international community and having access to cultural events from all over the world. But there is one universal pet peeve that she dislikes about diplomacy. “I hate to move. You have to make a home over and over again. It’s a real challenge. This last time our container got lost. Instead of getting everything in one month, it took three and a half months. I was forced to shop!”

But this diplomatic wife, who enjoys the lighter side of life, playfully admits that wasn’t necessarily a tremendous hardship.