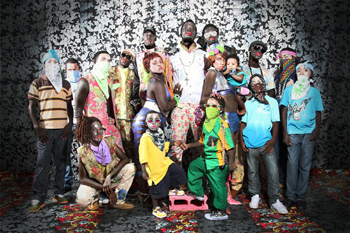 On a map, the island nations of the Caribbean look like small boats bobbing wildly, moving but unmoored, specks of different shapes and sizes, but none seemingly of great consequence in the surrounding waters and the larger adjacent continents.

Yet in “Wrestling with the Image: Caribbean Interventions,” a showcase of contemporary artists from all over the Caribbean at the Art Museum of the Americas, we see the very far-reaching consequences of history, globalization, identity and artistic innovation.

We see places where Americans and Europeans vacation, places that have been colonized, places where ethnicity and race have fought and melded, places of pristine beauty and grinding poverty, of tremendous hope and great suffering. All of this in those bobbing little boats called nations.

Photos: Art Museum of the Americase

In “Wrestling with the Image: Caribbean Interventions” at the Art Museum of the Americas, a group of contemporary artists offer a different visual perspective of the Caribbean, beyond its sandy beaches, in works such as “Entourage” by Ebony Patterson, above, and “Toussaint et George” by Nikolai Noel (on the home page.)

In this exhibit, those nations include the Bahamas, Barbados, Belize, Dominica, Guyana, Haiti, Jamaica, Saint Kitts and Nevis, Saint Lucia, Saint Vincent and the Grenadines, Suriname, and Trinidad and Tobago. The show deliberately makes you think of picturesque palm trees and the benign, marketing images associated with these Caribbean destinations, and then flips that commercialism on its head with outright creativity.

The artists — most of them young and new — confront the clichés of who they are and where they’re from, rejecting stereotypes while at the same time embracing their surroundings, heritage and history.

They also explore their differences, not only among each of the nations, but among the people as well. These islands are after all great mixing bowls where Europeans, Americans, Africans, Latin Americans and Asians have all washed ashore at some point, confronted by natives, both sides forever changing the other. Co-curator Christopher Cozier, himself an artist, suggests in a lengthy and challenging essay that “this is a conversation about movement in the Atlantic world — a dialogue about dispersal rather than displacement.”

If you look at the artists though — who represent a wide variety of viewpoints on issues ranging from migration to gender equality to the spread of culture — you see not so much displacement as you do divergence and an almost musical-like diversity. This music also resides in the array of genres and tools being used — traditional and heavy oils, acrylics, digital images, photography, film, sculpture and installation among them.

On the whole, it’s fair to say that these artists don’t dive into total abstraction or even conceptual art per se to express what they need to say through their art. They’re not trying to be artistically correct or trend-setting or deliberately controversial. They are trying to be thoughtful, honest yet dynamic, probing their hearts, dreams and reality.

Roaming the gallery, we experience these emotions. For instance, on one floor are hundreds of bottles wrapped in colorful, painted cloths, a visual reminder of what’s called marooning in Suriname by artist Marcel Pinas. Nearby, Santiago Cal from Belize has fashioned a display of hammers — beautifully clean, finely done and murderously efficient — in what the artist describes as “a symbol for labor, progress and power.” Blue Curry on the other hand depicts the quintessential tropical allure of his native Bahamas in minimalist digital video and installations, hinting at the inherent beauty of the landscape while vaguely disparaging its exotic idealism.

Also shattering stereotypes, Richard Fung from Trinidad has included a video that centers on an old Hollywood World War II film starring Robert Mitchum as a marine and Deborah Kerr as a nun stuck on a Japanese-occupied island. They filmed in the Caribbean and Fung’s grandfather was one of the men used as an extra to portray a Japanese soldier.

Throughout the exhibit we encounter eye-opening reflections — conches flickering with light, somber, defiant faces peering out of black-and white-photographs, and delicate riffs on power and history, such as Haitian liberator Toussaint L’Ouverture, the George Washington of the Caribbean, all the way up to biting depictions of today’s maladies.

Dhiradj Ramsamoedj of Suriname confronts the seedier effects of materialism by crafting a figure completely covered in what appears to be the discarded debris of mass capitalism, which he says has fundamentally altered human behavior, making it more unpredictable.

These artists seem superbly cognizant of what’s happening around them: the beauty of the environment and its misuse, how technology is bringing young people together yet also eroding their individual identity, how past colonialism and modern-day consumerism have shaped Caribbean culture, and how much more complex that culture is than sunny beaches and swaying palm trees.

“Wrestling with the Image” is part of the “About Change” emerging artists’ program, an initiative of the World Bank in partnership with the Inter‐American Development Bank, the Organization of American States, and the Caribbean Community (CARICOM) Secretariat. And change is exactly what this exhibition is about. In fact, by the time you’re done viewing these works, any preconceived notions about the Caribbean are sure to float away like a bobbling boat, or drown altogether. As co‐curator Tatiana Flores put it: “Whether they challenge, delight, frustrate, or disgust, these images provoke a reaction.”

Wrestling with the Image: Caribbean Interventions

Organization of American States Art Museum of the Americas