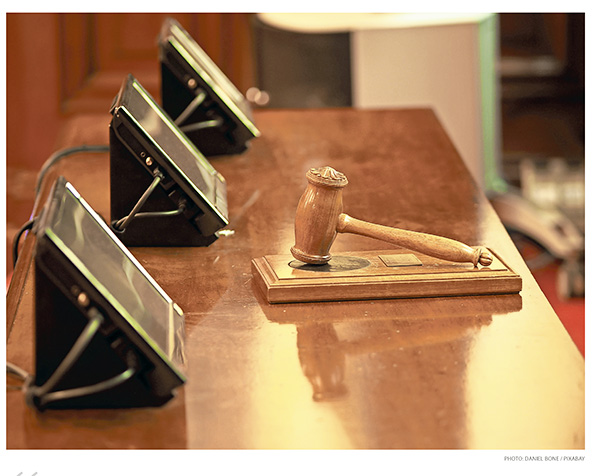 The young American mother was distraught. A U.S. judge had just decided that her two small children should go back to Mexico, where their father lived. The children, both U.S.-born, had come to visit their mother during the summer, as stipulated in the divorce settlement between the parents. This wasn’t the first time they spent the school break with their mother before returning to Mexico, so the father had no hesitation about sending them again. But as the father waited at the airport to pick them up on the day they were supposed to arrive back in Mexico, he received a text message from his ex-wife. It was short and to the point: The kids were not coming back to Mexico.

The father quickly filed a case under the Hague Convention on the Civil Aspects of International Child Abduction. The multilateral treaty signed in 1980 provides an expeditious method to return a child who has been internationally abducted by a parent in breach of another parent or guardian’s custody rights.

In a U.S. court, the father’s lawyer argued that the children’s habitual residence was “unquestionably” Mexico and provided evidence that he had custodial rights over the 7-year-old twins. The mother’s lawyer claimed that the United States was the children’s habitual residence, that the father had consented to the children staying in the U.S. and that the mother feared for the physical and mental well being of her kids if they went back to Mexico. “There’s a drug war going on in Mexico,” she noted, adding that the U.S. offered better amenities and opportunities for her children.

The judge, however, ultimately sided with the father and ordered the children to be returned to Mexico. The father gripped the arm of his lawyer and thanked her. The mother let out a gasp before hanging her head and weeping.

Hague Abduction Convention cases are never easy, but, happily, this one was entirely made up and play-acted at the Czech Embassy in Washington, D.C. The aim of the mock trial was to provide the audience of diplomats and State Department officials with a better understanding of how the Hague Convention on International Child Abduction is supposed to work. The event was organized by the Consular Corps of Washington, D.C., a 50-year-old nonprofit organization that seeks to increase consular effectiveness in the U.S. through training events, such as the “trial,” networking opportunities and social gatherings.

“The idea behind this mock trial was to show what the Convention represents. It’s a tool that’s useful to many different systems but is beset by preconceived ideas about how it works,” Suzanne Lawrence, special adviser for children’s issues at the State Department — and the “judge” who ordered the children to be sent back to Mexico — told The Washington Diplomat.

“Some country officials think it’s going to encroach on their sovereignty in some way,” she continued. “At the beginning when we approach them — maybe because the U.S. has a lot of migration between itself and that country — officials will say, ‘All the U.S. wants is to get their kids back.’ But then they see that they’re disadvantaging their own citizens as they become left-behind parents. The Hague Convention gives parents a way to pursue an international abduction case instead of leaving them to fend for themselves in the legal system of the country that their children have been taken to — if that’s even possible.”

The Hague Abduction Convention currently has 98 member states. To obtain the return of a child through a Hague proceeding, a left-behind parent has to provide evidence that their child was habitually resident in one Convention country, and was wrongfully removed to or retained in another. They also have to show that the removal or retention of the child violated the parent’s custodial rights; that the Convention was in force between the two countries when the child was abducted or retained; and that the child is under the age of 16.

The Hague Convention applies to children until they’re 16 because, well, you try taking a child who’s 17 and putting them on a plane against their will. Some countries will hear testimonies from children younger than 16 — in some cases as young as 5 or 6. Most countries that are party to the Hague Convention are also bound by the U.N. Convention on the Rights of the Child, which includes a clause on hearing the child’s opinion.

Convention cases are heard by a judge from one of the countries of the parties involved. Although countries often believe judges will favor the parent who is a citizen of their country, “part of the beauty of the system is the trust between countries,” said Ignacio Goicoechea, the principal legal officer for the Hague Conference’s Latin America and Caribbean region. “In the case of today’s mock trial, the Mexicans trusted that the U.S. judge would take the right decision and the U.S. judge trusted that the Mexican judge would, in future, be able to deal with the other topics that this family crisis encompasses. The judge was not seen as American but as a human being trying to take the decision that is in the best interests of the child.”

In the United States, the Office of Children’s Issues at the Bureau of Consular Affairs leads efforts to prevent abductions and to respond when international abductions happen. U.S. officials helped secure the return of 215 children to the U.S. in 2017 and 230 in 2016, while 197 and 186 cases respectively in those two years were resolved without the child returning to the U.S. The number of abduction cases reported to the bureau has declined in recent years, in part because preventive measures, such as the Children’s Passport Issuance Alert Program (CPIAP) — under which a parent is alerted if the other tries to obtain a passport for a child without their consent — have proven highly effective. “I think the Convention itself is also a deterrent because it says there is a mechanism against international child abduction and retention, and it does work,” said Lawrence.

But even when both countries have acceded to the Convention and have an agreement between them, the deterrent effect is not strong enough to prevent a child from being abducted. Take the case of Sean Goldman, for instance, one of the best-known international abduction stories to Americans, thanks to his father David’s unrelenting battle to get his son back. 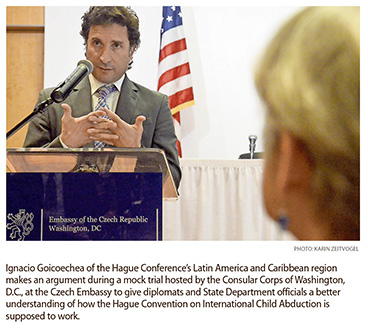 Sean’s mother took him to Brazil when he was 4, ostensibly for a holiday, but on arriving in her native country, filed for divorce from his American father, David. The mother remarried and, a few years later, died in childbirth. When David flew to Brazil to try to bring his son home, his former in-laws fought to keep the boy in the South American country. After five years of legal battles and some $700,000 in legal and travel expenses, David Goldman finally got his son back. Goldman is now focusing on providing his son with as normal of an adolescence as a kid should have, and on supporting other parents who find themselves in the same legal minefield as he did when Sean was illegally taken by his mother.

While the Hague Convention has been in force between Brazil and the United States since 2003 — a year before Sean Goldman was abducted — Brazil is one of several countries that are generally noncompliant with the terms of the Convention, according to the 2018 annual report on international child abduction issued by the State Department. At the start of 2017, there were 20 open child abduction cases between the U.S. and Brazil. Eight new cases were brought during the year, bringing the total number of cases to 28. Of those, only 12 were resolved.

In 2015, left-behind parent Christopher Brann recounted in a Washington Post opinion piece how he found himself in a very similar situation to David Goldman. Brann and his wife were in the process of divorcing when she asked in 2013 if she could take their son, Nico, who was almost 4, to Brazil for her brother’s wedding. Not wanting to cut Nico off from his mother’s family, Brann agreed to the trip, “but only after making sure we had a travel agreement, signed by our lawyers and filed with the Texas court, requiring my wife to return. I knew I had done everything I could to protect my son, and I prayed he would be back safe in my arms in three weeks’ time,” Brann wrote.

Two and a half years later, he was still waiting, even though the State Department, Brazil’s Central Authority on child abduction and the office of the Brazilian attorney general all agreed that Nico had been taken illegally to Brazil and that, under the Hague Convention, he had to be returned to the U.S.

Bucking those opinions, Brazilian judge Arali Maciel Duarte blocked the child’s return in July 2015. “The judge agreed that my son was ‘illicitly’ taken. Yet she claimed Nico was ‘well settled’ in Brazil even though I filed my case within two months of Nico’s abduction. The Hague Convention says a return cannot be denied on these grounds unless the left-behind parent delays more than a year before filing a case,” wrote Brann.

Nico’s Brazilian grandparents were arrested when they flew to the U.S. in February 2018. In May, a jury in Houston found them guilty of aiding in an international kidnapping but acquitted them of conspiracy charges. Nico and his mother, meanwhile, remain in Brazil.

Although Brazil may seem something of a poster child for noncompliance with Hague Convention rules, it is far from the worst offender. India had 104 abduction cases in 2017, of which only 16 were resolved and four closed. “The competent authorities in India demonstrated a pattern of noncompliance by regularly declining to work with the Department of State toward the resolution of pending abduction cases,” the State Department’s annual report says. “While the Indian government repeatedly met with U.S. officials to discuss abduction cases, thus far, it has failed to take concrete steps to resolve pending cases.”

Brann and Goldman’s cases are far from unique. As Brann described in his op-ed in the Washington Post in 2015, “I am merely one of 763 American parents whose children were illegally taken to 66 different countries and who are struggling to secure their return,” he wrote. “If the U.S. government cannot secure the return of Nico, no left-behind parent has any hope.”

The Hague Convention seeks to make sure that countries involved in a child abduction case respect the decisions and judicial system of the other country. “If countries didn’t trust each other and tried to take decisions on their own, it would be like going back to the Middle Ages,” said Goicoechea.

In spite of the difficulties with noncompliance, the nearly 100 countries that are party to the Hague Convention on international child abduction are “an overwhelmingly positive vote that this is one of the best tools for people to resolve these very complex, very sensitive and emotional issues,” said Lawrence.

“Ultimately, the children are the victims, and we owe it to them to have something in place that gives parents a way to navigate through these situations.”